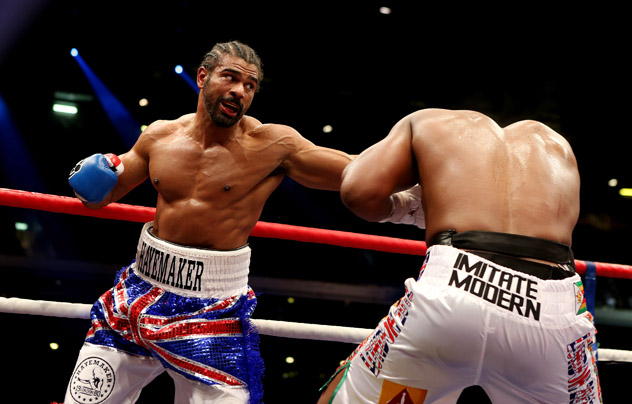 In January it was David Haye, not Tyson Fury, playing Batman and the joker he was up against, Mark De Mori, absorbed five or six powerful shots to the skull before wisely opening his parachute at 2:11 of Round 1.

Haye, who is rated No. 10 by THE RING at heavyweight, had returned from three-and-a-half years of injury-related exile to blast out an overmatched foe but his comeback was very well received. A packed O2 Arena in London reacted enthusiastically and the former cruiserweight and heavyweight titleholder was elated.

“It really was amazing,” said Haye, who faces Arnold Gjergjaj on Saturday at the same venue. “Being out on the sidelines and watching other fighters achieve their goals was hard to take. During my time out, Anthony Joshua won Olympic gold and now he’s a world champion. It wasn’t easy to just accept that I was a commentator and a former champion.

“Deep down, I knew I had more in the tank and there were more big nights ahead of me. I knew I could do it and I worked hard to get through all the rehabilitation that was required on my shoulder. Fortunately, now, the stars have aligned and I’m back doing what I do best and that’s landing a combination on someone’s chin and putting them to sleep.”

The 2016 version of Haye did produce some of the same old stuff, although the Englishman looked substantially larger than the sleek 210-pounder who faced Audley Harrison, Wladimir Klitschko and Dereck Chisora in his prior three outings. Against De Mori, Haye weighed in officially at 227 pounds and this reporter asked if he was intentionally bulking up ahead of potential clashes with such behemoths as Joshua and Tyson Fury.

“The weight isn’t a concern,” said Haye immediately. “If I boxed in-close, pulling and wrestling with an opponent, then obviously my weight would be a factor, but I move around, use my feet, shoot in and out, so there’s no benefit in me being heavy. It would just slow me down. I have to find a happy medium where I can land blows, absorb blows and be durable enough to fight when things get rough and tough. I think 230 pounds makes sense for me.

“The thing that did worry me was if I still carried the same pop. It looked like I did in sparring and when I was hitting the bags but when the lights are on, all it takes is for your timing to be off by a fraction of a second and you’re stunning someone instead of knocking them out. It was nice to know that I could still knock someone unconscious on the big stage when I landed flush. Without my one-punch knockout power, I wouldn’t be who I am.” 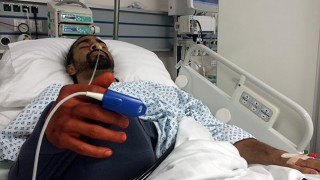 Up next for the returning “Hayemaker” is Gjergjaj. The Switzerland-based Kosovar is 31 years old, unbeaten, and has been a professional for almost seven years. Haye, promotionally adept and completely in tune with what the public perceives as an attraction, explained why the 16-1 underdog, who has barely thrown a punch outside Switzerland, was selected.

“The two stipulations I requested were that my opponent be unbeaten and taller than me,” said the two-weight world titleholder. “We got a list of unbeaten heavyweights and Gjergjaj was second only to Deontay Wilder because he’s had 29 straight wins and he’s 6-foot-5. There are no big names on his record but he’s never lost and he’s done a lot of sparring with Klitschko, Tyson Fury and Marco Huck. Gjergjaj has been learning behind closed doors, he’s confident and I’m sure he won’t let the big occasion get to him.

“Having an unbeaten opponent is always good and I did have my promoter’s hat on in that sense. The thing is, when you fight someone who has been beaten or knocked out, your performance is always compared to someone else’s. There were a few fighters I could have fought who had been stopped in one round but if I knock them out in two rounds, the fans say I’m not as good as this other guy. You can’t win. It’s difficult to argue with an unbeaten record; Gjergjaj fit the bill, he was available and he was willing to come over and fight.”

The British heavyweight scene is busy this summer. On June 25, Joshua will make his maiden IBF title defense against American Dominic Breazeale in London and two weeks later THE RING, WBA and WBO champion Tyson Fury will have home advantage when he faces Klitschko in their eagerly anticipated rematch in Manchester.

Haye, providing he deals with Gjergjaj, will be on the hunt for an opponent who brings the right stuff to sell out the O2 Arena once again and the charismatic 35-year-old is in luck. He is the latest high-profile fighter to fall victim to the infamous “Let’s go Champ!” war cry of the irrepressible American Shannon Briggs, who is scheduled to appear on Saturday’s undercard.

Haye recalled, “When Briggs first turned up, I didn’t want anything to do with him but he just keeps talking and talking. Initially I was like, ‘I don’t have any interest in fighting this moron’ but then the public became involved and the fight sparked my interest. People genuinely want to see me against Shannon Briggs, so if they want it I’ll give it to them.

“It’s the biggest non-title fight that I can have in terms of generating hype and excitement (in the U.K.). All the heavyweight titles are tied up at the moment, so I have to look in another direction. Briggs has made plenty of noise, so let’s get it on.” 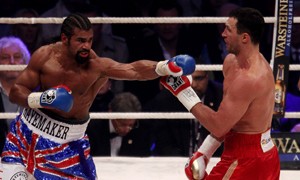 The prospect of watching Haye decimate a 44-year-old heavyweight who left his best days behind him in the 1990s won’t sit well with hardcore fans but the fight is undeniably an attraction.

What hurts the sport more than any matchup, however, is that the issue of performance enhancing drugs in the heavyweight division has been under the microscope recently. Just last week, Lucas Browne was stripped of a “regular” portion of the WBA title after he tested positive for Clenbuterol (fat burner) and now Alexander Povetkin has, at least for the time being, lost a WBC title shot against Deontay Wilder because meldonium (increases blood flow and improves exercise capacity) turned up in test results collated by VADA.

“It’s good and bad,” said Haye with a sigh. “The bad news is that the sport has been hurt because high-profile fighters are being caught with dodgy substances in their system. How it got there and the amounts detected is irrelevant.

“On the plus side, it means that fighters outside the U.K. are being tested stringently. I was tested by UKAD a few days ago and when their representatives arrive you must supply blood and urine, which is the way it’s been for years. There are other countries where that’s not always the case in the lead-up to a fight. Now fighters who want to abuse supplements will begin to think twice and that’s a good thing.”

The heavyweight scene needs as many favors as it can get right now and Haye’s comeback is part of the upswing. Can Gjergjaj provide ample resistance and value for money? That remains to be seen.

“I’m feeling really good and powerful so well see,” said Haye with an ominous tone. “I’ve trained for a long, grueling fight but let’s see how the guy holds up when I start landing flush.”