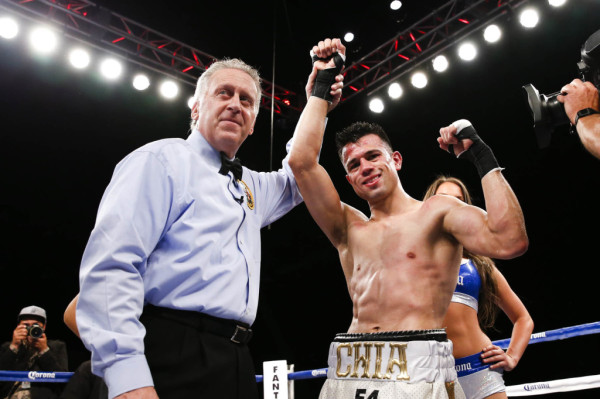 17
May
by Coyote Duran

Welterweight Francisco Santana will square off against Jose Benavidez on July 23, manager Frank Espinoza confirmed to RingTV over the weekend.

The 10-round bout will take place at the MGM Grand in Las Vegas and will be the opening bout of the HBO Pay-Per-View broadcast that night featuring Terence Crawford and Viktor Postol in a 12-round junior welterweight title unification bout.

Santana (24-4-1, 12 knockouts) has enjoyed a recent resurgence as of late, winning 12 of his last 13 bouts. In his last bout on April 2, Santana won a 10-round unanimous decision over Ed Paredes in Port Hueneme, California.

The recent success of the Santa Barbara resident has not gone unnoticed.

Within the last six months, Santana, who trains in nearby Ventura, signed a promotional contract with Top Rank Promotions and Espinoza signed a managerial contract with the Mexican-American.

“He’s certainly come a long way in the last year or so,” Espinoza told RingTV.com. “He looked solid in his last fight against Paredes. He’s improved a great deal and I believe he can be victorious against Benavidez on July 23.”

“We have a lot of faith in Francisco. He’s at the point in his career where he needs to make the most of these opportunities. He has worked very hard to get where he is at. Jose Benavidez is a good fighter. It’s a tough fight but Francisco is up to the challenge and I am confident he will do extremely well.”

Benavidez (24-0, 16 KOs) has not fought since Dec. 12, when he scored a 10-round unanimous decision over Sidney Siquiera.

In the Siquiera fight, Benavidez fought at a career-high 152.25 pounds, dispelling any rumors he would continue to campaign as a junior welterweight.

Benavidez, who resides in Phoenix, has often trained for recent fights in Southern California.

Francisco A. Salazar has written for RingTV since October of 2012 and has covered boxing in Southern California and abroad since 2000. Francisco also covers boxing for the Ventura County (CA) Star newspaper, Boxingscene.com, and Knockout Nation. He can be reached by email at [email protected] or on Twitter at FSalazarBoxing