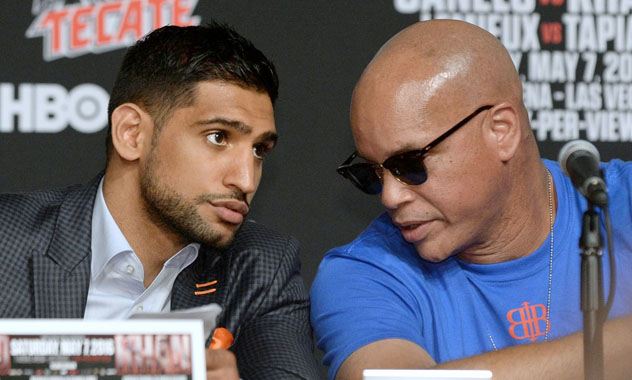 09
May
by Coyote Duran

Amir Khan’s reaction to his conclusive and concussive loss to Canelo Alvarez was fairly fascinating to watch and helps one understand why Khan is an attraction in the game.

One of my pals, Lee, a solid boxing fan, catches the big fights and knows the Top 10 or Top 15 of the heap, asked me Sunday morning what the big deal about Khan is.

The guy has lost a bunch of fights, has looked meh in many of his wins…and, now, lost the signature fight of his career. What’s the draw, Woods?

Well, I told him, Khan has been on radar screens for a long time, since he was a teen Olympian, and sustained notoriety is an XL part of being a “star” in pugilism.

Sometimes someone bursts on the scene, doesn’t need a slow build to a place of prominence. That can happen when his fighting style is novel and/or overwhelmingly compelling to watch, a la Mike Tyson. Or it can happen when someone’s personality emerges as special, when people decide that what, say, Ronda Rousey says, and how she acts, is worth paying extra attention to.

Again, it is rare because asking someone to be special as an athlete, and as a person, is asking a lot.

His fighting style has been, at times, of the especially compelling variety. His hand speed is something to behold, when he puts combos together. Then, he also begs attention because, once you have come to love or loathe him, you want to see if he can escape his chin deficiency or if he will be checked and wrecked, as Canelo did Saturday in Las Vegas.

Khan’s personality also isn’t Ronda Rousey-esque but he does dispense material that demands you keep track of his public pronouncements.

Exhibit A: After getting his chin tested and failing the quiz, he basically busted chops on the winner, for being far bigger than him. He told Canelo to man up, as he did, and take on the role he did, as the undersized underdog against Gennady Golovkin.

Yep, don’t see this happen much…Usually you get the typical “He was the better man” speech from the loser but Khan tossed a verbal knuckleball and reminded us why he is seen as an A grade attraction, even if my pal Lee can’t see why.

Khan’s behavior after his post-fight chat with HBO’s Max Kellerman, in which he dared Canelo to be as brave as he, continued to be magnetic. He posted a pic of himself en route to the hospital to get a once-over, offering a “Them’s the breaks,” good-natured shrug and admission that the Mexican caught him with a humdinger. He thanked Canelo for the opportunity, sagely thanked the native press for attending and retweeted some posts which spoke of his mettle. Then he went to bed…and then his posts took on a different air.

Some stubborn pride returned and replaced the humility of a fresh defeat. He posted the scorecard from the abbreviated fight which proved (to many eyes), once again, that many of the judges out there are corrupted, dolts or are corrupted dolts. Another pic went up, of Canelo lifting him with one arm, and Khan termed him a #monster. Message: Don’t forget that I was the David in this one and, OK, my slingshot was broke.

So, yeah, there’s a reason Khan gets talked about for the big fights – a few reasons, as we’ve laid out there. And guess what…just because he’s lost and his chin is “capital C”-chinny, he will continue to be talked about and secure marquee fights if he craves them. Because he is a name; his fame is solidified and this is a sports entertainment business and he is entertaining, whether you love or loathe him.

Whether you love or loathe him…waitaminnit, how can anyone loathe Michael Woods? He’s fully Krausened and has both Tetrahydrozoline AND Retsyn!