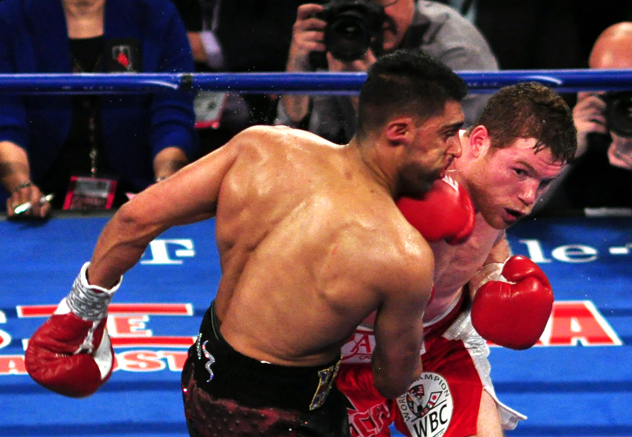 LAS VEGAS – When the punch landed, you could almost hear a sigh of relief from everyone connected to Canelo Alvarez.

For five-plus rounds on Saturday night at the new T-Mobile Arena, Amir Khan’s quick hands and slick movement gave Canelo fits and raised the strange specter of a tremendous upset. Then, in a flash, that changed as dramatically as is possible in boxing.

The fighters were in the center of the ring when Canelo feinted slightly with his left and landed a right-hand bomb on Khan’s chin that rendered the Briton unconscious before he fell flat and motionless on his back.

There was no reason to count. The fight ended with 23 seconds remaining in Round 6.

Just like that, Canelo turned frustration into glory to retain his RING and WBC middleweight titles and keep talk of a much-talked-about Canelo-Gennady Golovkin showdown very much alive.

“He is a fast fighter,” Canelo said of Khan. “I knew things would be complicated in the beginning but I knew they would come to my favor as the fight went on. People have known me only for my power. I have many more qualities in the ring and I showed that. I think people saw more of me tonight.

The atmosphere at T-Mobile was charged before the fighters entered the ring, as if the fans knew exactly what was coming.

The early rounds weren’t exactly what the pro-Canelo crowd had in mind, though, as Khan, the quicker, more athletic of the two, did exactly what he needed to do to compete with a naturally bigger man.

The former 140-pound titleholder played the sharpshooter, landing fast combinations here and there and then moving out of harm’s way. Canelo, persistent but ineffective, barely got anything done in the first three-plus rounds.

Then, in the fourth and particularly in the fifth, he seemed to close the distance and began to land some meaningful punches to both the body and head. Khan took everything Canelo landed but, suddenly, it seemed more likely that a big blow could change everything.

When it came, it was with such force that as Khan went down – his eyes closed before his head hit the canvas – most of 16,540 spectators shot up out of their seats and created a deafening din. They saw what they came to see and couldn’t have been happier.

The advantage everyone thought would be the difference – Canelo’s size and strength, combined with Khan’s suspect chin – decided the fight.

What could Khan say?

“I think it’s time for Canelo to step up to GGG, just like I stepped up to fight him,” said Khan, who was taken to a hospital as a precaution immediately after the fight. “I tried as much as I could and trained very hard for this fight. Unfortunately, I didn’t get the result I wanted. Although I feel strong at this weight, I am naturally a lighter fighter and plan to go back down to welterweight. But I like to challenge myself and that is why I took this fight. I want to be the best, and to be the best, I have to fight the best.”

With Khan out of the way, the question everyone has been asking became even more prescient: Will Canelo fight Golovkin in his next fight, presumably in September?

WBC President Mauricio Sulaiman has said emphatically that he will strip Canelo of his 160-pound title if he doesn’t agree within 15 days to fight Golovkin, the sanctioning body’s “interim champion.”

Comments made by Oscar De La Hoya, Canelo’s promoter, were encouraging. He said he would begin negotiations with Golovkin on Sunday morning.

“You heard Canelo after the fight calling out Golovkin,” De La Hoya said before Canelo emerged for the post-fight press conference. “He even wanted to fight in ring right now tonight. That’s the fight to make. And tomorrow I will make the call, I will start negotiating. I really hope that we can come to an agreement.”

“We’re willing to make him an offer. I’m happy not just to fight him but beat him,” he said.

And then the thorny weight issue was brought up. Canelo has fought at a catchweight of 155 pounds his past four fights. Will he require Golovkin to come down to that weight to make the fight?

That would seem to allow Canelo the wiggle room he would need to demand a catch weight, which some fear would drive Golovkin away. Canelo, the bigger draw on TV, has the leverage, though. As De La Hoya described the pending negotiations: “It’s like a game of poker. I have four aces, they probably have a pair of twos.”

We’ll see how that plays out.