From THE RING Magazine: The Mexican pioneers 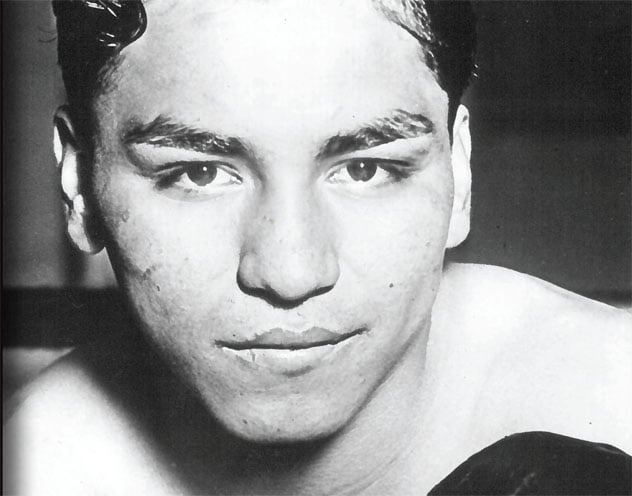 This story appears in the July 2016 edition of THE RING Magazine.

Like clockwork, a shining new boxing star emerges from Mexico every few years to win the hearts and minds of his countrymen. Canelo Alvarez is the main man now but he’s merely the latest in a long line of fighters that stretches back to the early 1930s.

The five fighters in the following profile are long forgotten but they reigned at a time when, because there were fewer weight classes, being a champion had more cachet. Only one is in the International Boxing Hall of Fame but an argument could be made that a couple of the others belong there, for they were as popular as any Mexican fighter you’d care to name and had records to rival many inductees. If nothing else, they were the first links in a chain leading all the way to Alvarez. 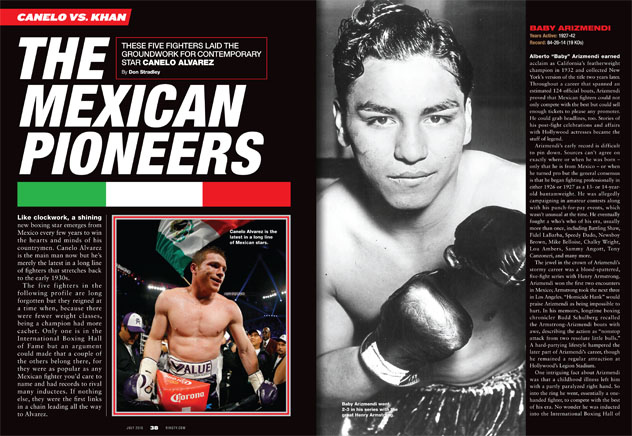 Alberto “Baby” Arizmendi earned acclaim as California’s featherweight champion in 1932 and collected New York’s version of the title two years later. Throughout a career that spanned an estimated 124 official bouts, Arizmendi proved that Mexican fighters could not only compete with the best but could sell enough tickets to please any promoter. He could grab headlines, too. Stories of his post-fight celebrations and affairs with Hollywood actresses became the stuff of legend.

Arizmendi’s early record is difficult to pin down. Sources can’t agree on exactly where or when he was born – only that he is from Mexico – or when he turned pro but the general consensus is that he began fighting professionally in either 1926 or 1927 as a 13- or 14-year-old bantamweight. He was allegedly campaigning in amateur contests along with his punch-for-pay events, which wasn’t unusual at the time. He eventually fought a who’s who of his era, usually more than once, including Battling Shaw, Fidel LaBarba, Speedy Dado, Newsboy Brown, Mike Belloise, Chalky Wright, Lou Ambers, Sammy Angott, Tony Canzoneri, and many more.

The jewel in the crown of Arizmendi’s stormy career was a blood-spattered, five-fight series with Henry Armstrong. Arizmendi won the first two encounters in Mexico; Armstrong took the next three in Los Angeles. “Homicide Hank” would praise Arizmendi as being impossible to hurt. In his memoirs, longtime boxing chronicler Budd Schulberg recalled the Armstrong-Arizmendi bouts with awe, describing the action as “nonstop attack from two resolute little bulls.” A hard-partying lifestyle hampered the later part of Arizmendi’s career, though he remained a regular attraction at Hollywood’s Legion Stadium.

One intriguing fact about Arizmendi was that a childhood illness left him with a partly paralyzed right hand. So into the ring he went, essentially a one-handed fighter, to compete with the best of his era. No wonder he was inducted into the International Boxing Hall of Fame in 2004. Imagine if he’d had a good right hand?

It wouldn’t be until 1944 that a boxeador from south of the border would win a championship. This time it would be a ring veteran with a daring style, a fighter who could rumble as a righty or a lefty, a man whose life mingled easily with myth, including one bit of apocrypha that had him starting his pro career at age 10. But once you separated the truth from the fiction of Juan Zurita’s career, you were still left with an amazing ledger that included more than 150 professional fights – the number is inexact because historians keep digging up more bouts -including wins over such esteemed names as Sixto Escobar, Midget Wolgast and Sammy Angott, the last of which earned Zurita the NBA lightweight title. Since Mexican-American Battling Shaw had been a Texas boy, Zurita has the distinction of being the first Mexican-born world champion.

Though the fight, held in Los Angeles, was described by the United Press as a “desultory” 15-rounder, there was no doubt that Zurita had controlled the action. “Zurita’s Mexican admirers stormed the ring before the verdict was announced,” noted the UP, “so certain were they of the outcome.”

Unfortunately, it was another short title reign for a Mexican champion. Just over one year later, in a bout that took place in a Mexico City bullring and was billed as the first championship fight held in that country, Zurita fell in two rounds to Ike Williams. The Mexican fans were so heated over Zurita’s loss that they threw rubbish at the ring, while a phalanx of guards was needed to escort the newly crowned Williams back to the clubhouse. Zurita fought only once more, retiring in 1948.

Known as “The Lion of Monterrey,” Salas’ spirited style made him a favorite at the Los Angeles Olympic Auditorium and Legion Stadium in Hollywood. Known to fight 10 or 11 times in a 12-month span, Salas was a promoter’s dream: He was a durable brawler who fought constantly and never appeared to need a rest.

On his way up the perilous ladder of success, Salas lost to some of the best of the day, including Sandy Saddler and Art Aragon. But Salas was apparently learning in defeat, for when he finally earned a shot at lightweight champion Jimmy Carter in 1952, Salas surprised everyone by keeping the bout close and putting Carter on the deck in the 15th round. Though Carter survived and had his hand raised at the end, Salas was impressive enough to earn an immediate rematch. This time, fighting like the jungle cat he was named after, Salas found himself the winner by a split decision, making him only the second world champion from Mexico after Zurita.

Salas didn’t fare as well in the rubber match, losing to Carter on points. He continued fighting for many years, usually in California, but as his career wound down he began appearing in such far-flung locations as Japan and Brazil. His final bout took place in Jamaica, where he lost to upstart Bunny Grant. Salas was only 32 when he retired but with 1,376 rounds behind him, enough was enough.

A bronze medalist at the 1952 Helsinki Olympic games, Macias’ radiant smile belied an aggressive fighting style that often left opponents sprawled through the ring ropes, wondering what had hit them. Nicknamed “El Raton” (“The Mouse”), Macias was a nearly perfect offensive machine, walking opponents down and hitting them hard with both hands. His popularity in Mexico was so great that in 1957 he starred as himself in a feature film about his life, a stunt usually reserved for the likes of Muhammad Ali.

Macias made his American debut in 1955 at the Cow Palace in Daly City, California, facing Thailand’s Chamroen Songkitrat for the vacant NBA bantamweight title. Though Songkitrat was hardly a top contender (he’d had 10 pro bouts and lost his previous two), Macias’ 11th-round TKO created a frenzy. “Hundreds of screaming Mexicans clambered into the ring the minute it was over,” reported the Associated Press, “with police unable to stop the mad scramble.” Macias’ supporters were known to bring roosters to his bouts and set them loose when he was victorious, creating a unique kind of post-fight mayhem.

Though Macias soon suffered a broken jaw in a non-title loss to Billy Peacock (whom he’d beaten before), he rebounded to notch 17 straight wins, including successful title defenses against Leo Espinosa and Dommy Ursua. This was Macias’ undeniable heyday, as he scored 14 of those wins by KO and headlined in locations ranging from Hollywood to Mexico City. His reign as champion came to an end when he lost a split-decision to Alphonse Halimi of France.

After his retirement from boxing, Macias appeared in a handful of movies and trained several young Mexican fighters. What Mexican kid wouldn’t want to learn from Macias? He was, indeed, the mouse that roared.

Becerra won the bantamweight title in 1959 by stopping Alphonse Halimi in the eighth round in Los Angeles. “Pandemonium broke loose,” Bill Miller reported for THE RING. “Even this hardened veteran of ring activity found himself cheering.” To put emphasis on his dominance, Becerra stopped Halimi in a rematch seven months later, again in L.A. The energetic young man with the cobra-quick left hook had not only twice avenged compatriot Raul Macias’ loss to Halimi, but seemed poised to rule the bantamweight class for many years.

Unfortunately, in between the two bouts with Halimi, Becerra was visited by the nightmare that haunts many fighters but only comes true for a few: the death of an opponent. Twenty-four-year-old Walt Ingram of West Virginia was brought to Becerra’s hometown of Guadalajara for what was to be an easy fight, a welcome-home affair for the new champ. It ended in tragedy, with Ingram losing by ninth-round TKO and dying from injuries sustained in the bout.

Those close to Becerra said he was never the same after Ingram’s death. Deeply religious and not impressed by fame, Becerra lost his taste for the business. After losing a non-title bout to the unheralded Eloy Sanchez in 1960, Becerra retired at 24. He came back only once, to fight a six-rounder in Guadalajara to raise funds for an injured fighter named Rudy Coronado. Becerra donated his fight-purse to Coronado’s family. He was that sort of fellow, a dynamic puncher with a kind heart.