Canelo-Khan undercard could steal the show 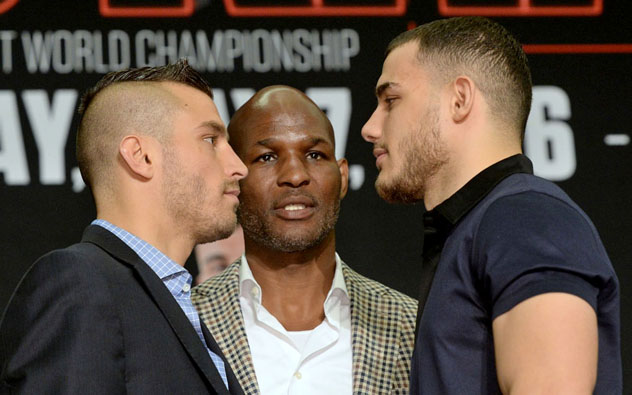 05
May
by Andreas Hale

LAS VEGAS — Sometimes, boxing undercards serve as little more than elevator music for fight fans who are anxiously waiting for the main event to start. But on certain occasions, there are fights on the undercard that blow the main event out of the water. Last year, Francisco Vargas and Takashi Miura put on a scintillating display of guts and glory that ended up being even better than the presumed fight of the year candidate between Canelo Alvarez and Miguel Cotto.

Golden Boy is certainly hoping that the same magic will take place on yet another Canelo-headlined fight with a solid undercard that features several heavy-hitters who are fully capable of stealing the show.

“Being on the undercard is part of paying your dues as a boxer,” Bernard Hopkins said at Thursday’s undercard press conference. “We’re hoping that one of these fighters use this opportunity to step onto the big stage.”

The co-main event is certainly one that could end in dramatic fashion as the returning David Lemieux (34-3, 31 knockouts) is looking to erase the memory of his knockout loss to Gennady Golovkin when he steps in the ring with Glen Tapia (23-2, 15 KOs), who is also looking to bounce back from a knockout loss last May to Michel Soro.

“I’m back on the big stage and extremely happy to be able to perform in front of the world again,” an excited Lemieux said. “What I love to do is give the fans a great show. I’m dangerously strong. You’re not only going to see power but some other things. We’ll see how Glen holds up his end.”

Tapia comes into this fight as the underdog and it is a role he embraces simply because he gets the opportunity to prove everyone wrong.

“I know most of you guys have me losing this fight,” Tapia confessed. “I understand why because it looks bad on paper. But I know what I can bring to the table. I’m a different fighter who learned from those losses. I can’t wait to show you guys what I can do. People don’t remember what you say, they remember what you do.”

Elsewhere on the card is an intriguing battle of welterweights as the undefeated Frankie Gomez (20-0, 13 KOs) takes on the always tough Mauricio Herrera (22-5, 7 KOs).

While Gomez is looking to impress and keep his unbeaten streak intact, Herrera is here to prove that he’s earned a new nickname:

“Never dreamed I’d come this far and I hope to stay at this level. I’ve fought at least six or seven undefeated fighters and gave them all hell. He’s going to find out. You can call me ‘The Dream Killer’ after this. Any prospects, line them up for me and we’ll see if they are the real deal.”

Herrera is 2-2 in his last four fights but could very well be undefeated if a couple of questionable scorecards went his way. Many thought that he did enough to beat Danny Garcia back in 2014 but it was an almost unanimous outcry when Herrera lost a unanimous decision to Jose Benavidez in December of that year. With both fighters having something to prove, this could certainly be an intense battle of wills.

Also featured will be the heavy-handed Curtis Stevens (27-5, 20 KOs), who is coming off a disappointing unanimous decision loss to Hassan N’Dam back in 2014. Across the ring from him will be unbeaten but relatively untested Patrick Teixeira (26-0, 22 KOs). This is certainly a huge step for Teixeira as he’s essentially auditioning as an unknown to an audience that may not have ever seen him before.

But Stevens is coming back incensed and with a chip on his shoulder.

“I’ve been off for a year and a half and training hard,” Stevens said. “I’m physically ready and I’m mentally there this time.”

An extra incentive for Stevens is that he’d like to give his mother an early birthday and Mother’s Day present with a knockout.

Although it’s become cliche in boxing to suggest that the undercard is worth watching, perhaps this is one that is worth tuning in for.