RING Ratings Update: A few moves, a lot of questions 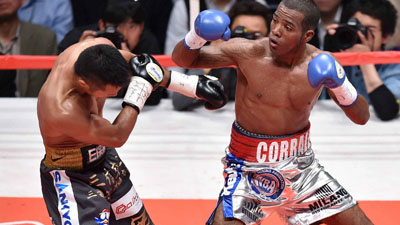 Our Nos. 1 and 2 super middleweights were involved in strange fights on Saturday in Washington, D.C. Then we had to figure out how that would impact the RING Ratings.

IBF titleholder James DeGale did what he was expected to do, defeating late replacement Rogelio Medina by a unanimous decision. However, the Olympic champion had to work a lot harder against his determined Mexican opponent.

Then WBC beltholder Badou Jack seemed to outbox Lucian Bute but had to settle for a controversial draw, which ensured a DeGale-Jack title-unification bout later this year.

So what to do?

One member of the panel suggested we consider lifting unbeaten No. 3 Gilberto Ramirez to No. 1 because of what he perceived to be shaky performances by DeGale and Jack. However, the Editorial Board decided that DeGale and Jack won their fights (even if Jack didn’t get the decision) and deserve to stay put for now. Plus, although Ramirez looked good against Arthur Abraham, he hasn’t proved much yet.

Then there was Bute. We considered moving the onetime titleholder into the ratings based on his last two performances – a competitive loss to DeGale and draw (technically) with Jack – and less-than-spectacular 168-pounders near the bottom of the Top 10. However, in light of Bute’s record in his last six fights – 2-3-1 (1 KO) – we decided to wait until the Canadian records a significant victory before rating him. He hasn’t had an important win since he outpointed a 42-year-old Glen Johnson in November 2011.

And consider the No. 10-rated fighter, Fedor Chudinov. Most people thought he was robbed when he lost a majority decision to Felix Sturm in his last fight. The 14-1 Russian really should be undefeated. Sturm is No. 9.

In the end, the only change in the super middleweight ratings involved Anthony Dirrell (No. 8 last week). He swaps places with Abraham (No. 7 last week) after his sensational first-round knockout of Caleb Truax on Friday in Atlantic City.

A serious complication in this week’s Ratings update was the case of junior lightweight Francisco Vargas and, similarly, the ongoing case of heavyweight Lucas Browne. Vargas (rated No. 1) tested positive for the banned substance clenbuterol this past week, one month away from his junior lightweight title defense against Orlando Salido (No. 4). Browne tested positive for the same substance in March after his victory over Ruslan Chagaev in Russia.

Both men claim the drug came from contaminated meat. Excuses are to be expected; everybody who tests positive says they’re innocent. Both men also claim to have tested negative just prior to what they say was the point of contamination, though: for Browne it was going to Russia, for Vargas it was eating some of his mother’s beef stew in Mexico.

THE RING’s policy on drug testing says this: “In the event that a boxer has undergone testing in which the boxer provides two samples (“A” and “B”) and the boxer’s “A” and subsequent “B” samples test positive for a performance-enhancing drug or if his “A” sample tests positive and he waives his right to have the “B” sample tested then the boxer shall immediately be removed from the ratings.”

Vargas’ results satisfy those criteria for removal. But the policy also says this: “A boxer who is dropped also may be reinstated if the testing agency subsequently reverses its decision or a court of competent jurisdiction finds that the test result was invalid.”

This is where it gets complicated because the California State Athletic Commission and the Voluntary Anti-Doping Association have already effectively said the result was invalid. They decided, along with Golden Boy (Vargas’ promoter) and Salido’s camp, to go forward with the fight and give Vargas “the benefit of the doubt,” as reported by ESPN.com. He will instead be subject to more rigorous testing between now and the fight to make sure he is clean, with the understanding that immediate suspension will be the result of another positive test.

This much is known: Clenbuterol, which in humans can be used as a weight-cutting aid, can be used in animals to produce meatier meat. It’s banned in the U.S. and other countries but some ranchers, those in Mexico among them, still use it illegally. There are many documented cases from around the world of regular people affected by clenbuterol-contaminated meat, as well as many high-profile instances involving athletes. In 2011 five members of the Mexican national soccer team were banned after testing positive.

Just this week, the NFL issued a warning to all players to beware of meat from Mexico or China as eating it could lead to a positive test for clenbuterol. This came after Houston Texans player Duane Browne had a 10-game suspension overturned after testing positive for the drug, which he said came from eating meat in Mexico.

It’s a strange case because on one hand, the substance is banned and an athlete is responsible for what goes in his body. On the other, the testing agencies themselves don’t really seem to know what to do with the problem of clenbuterol contamination.

With all the above factors in consideration, the Editorial Board decided to go with the California Commission’s “benefit of the doubt” and leave Vargas rated for now. Browne will also remain as his situation plays out.

Sharif Bogere (No. 5 last week) retains his position after his shutout victory over unrated and overmatched Samuel Amoako on the D.C. card.

Uchiyama drops all the way to No. 6 as a result. Corrales enters at No. 3. No. 9 Bryan Vasquez, who hasn’t fought in almost a year and has nothing scheduled, leaves the Top 10 to make room for Corrales.

Anselmo Moreno (No. 3) defeated Suriyan Sor Rungvisai (No. 7 last week) by a one-sided decision on Saturday in Panama. Moreno remains behind unbeaten Nos. 1 and 2 Shinsuke Yamanaka and Juan Carlos Payano. Sor Rungvisai drops to No. 10.