Amir Khan inspired by Leicester to pull off massive upset 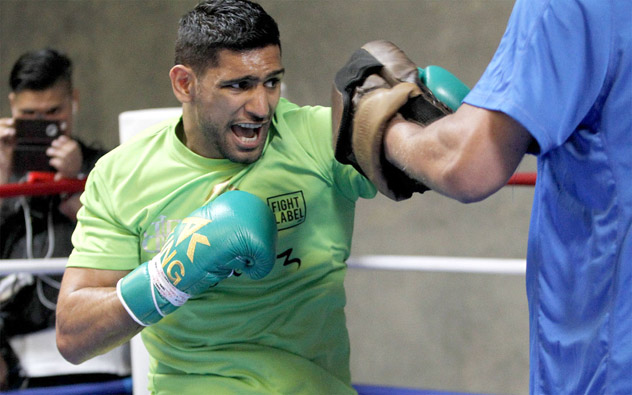 04
May
by Andreas Hale 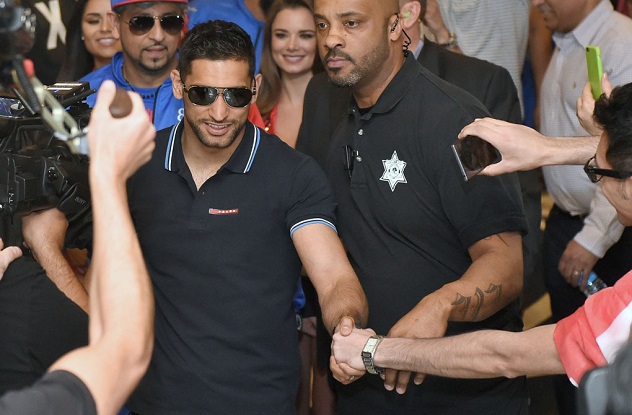 As Amir Khan prepares for his biggest challenge to date against Canelo Alvarez for the Mexican’s RING and WBC middleweight titles on May 7, the British boxer is drawing inspiration from the Leicester City Football Club shockingly winning the English Premier League, despite being a 5000-to-1 underdog.

“Nobody expected them to win,” Khan (34-3, 19 knockouts) said to a group of journalists after his arrival at the MGM Grand on Wednesday afternoon. “But it shows you that this might be the year of the underdog. If they could do it I can do the same thing. It’s all about believing in yourself.”

Obviously, Khan is nowhere near a 5000-to-1 underdog (most Las Vegas oddsmakers have him at 3.5 to 1). But very few give him a chance to defeat Canelo (46-1-1, 32 KOs) in a fight at 155 pounds. It’s a huge task for Khan considering that he expects Canelo to have a significant weight advantage on Saturday night. “I expect him to be about 175 pounds (after rehydrating) on fight night,” Khan said. “We tried to get him to fight me at a lower weight but he refused.”

This will be Khan’s first time fighting at a weight higher than welterweight and there are questions as to whether he’s essentially committing suicide by conceding weight to a much bigger man. However, Khan is a firm believer in the concept that speed kills and fully expects his fast hands to make a difference when the two square off.

“It’s going to be a game of chess at times. We have to be smart and remember that he’s going to throw something back,” Khan said of his expectations while noting that although he’s studied Canelo’s previous fights, he realized that the young Mexican rarely fights with the same style. “Since the Floyd fight he has improved a lot. He’s improved his range and he puts his punches together better. He’s even more powerful now.”

But if you expect him to adopt a similar style as Mayweather or Erislandy Lara to outpoint Canelo, you’d be sadly mistaken.

“I can’t expend all of my energy moving away from him,” Khan said. “I’m going to stand there at times and trade (with) him.”

For some, this sounds like a recipe for disaster. But for Khan, this is the moment that he’s been waiting for and he doesn’t appear to be interested in wasting it by running away. Years have passed and Khan was growing increasingly more frustrated that he was unable to land fights with the two marquee names in boxing. He is pretty transparent when he says that it bothered him that he was close to fights with Mayweather and Pacquiao but couldn’t seal the deal.

“(Not landing fights with Mayweather or Pacquiao) was something that I was upset about,” Khan said. “It does upset you when you are led along. But I’m here in a massive superfight.”

He had to give up a few things to get here (namely the weight) but Khan believes that he’s primed to pull off a huge upset. And if he’s able to find a way to upend the Mexican superstar, Khan believes a bright future is ahead of him. And that could mean a fight with Mayweather if he decides to chase victory number 50.

“A victory in this fight will definitely put me on top if he decides to come back but I don’t know if he’s coming back,” Khan said “I seen his comments but I think he’s a little bitter. He’s not seeing his face on the side of the MGM Grand and people not talking about him on Cinco De Mayo and they are talking about myself and Canelo.”

And on May 8, the U.K. fighter is hoping that the world will be talking about Amir Khan.