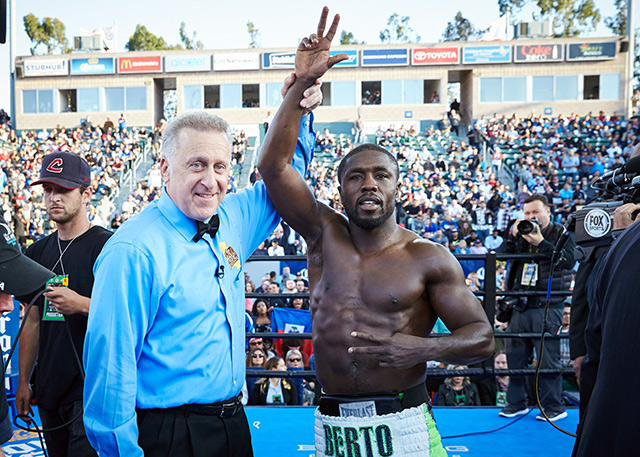 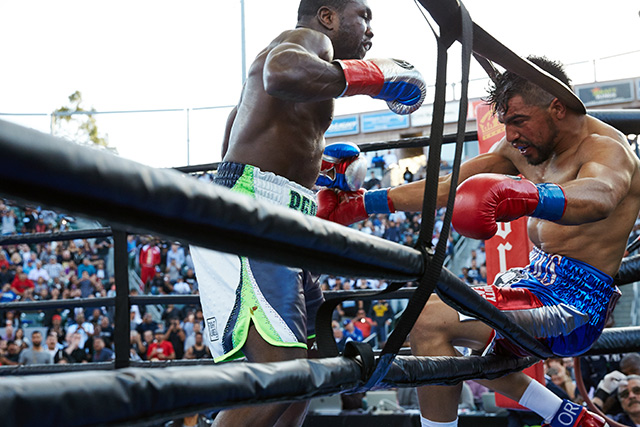 Andre Berto raged back from an early knockdown to drop and overwhelm Victor Ortiz in their rematch on April 30, 2016, at StubHub Center in Carson, California. Photo by Suzanne Teresa / PBC

Andre Berto got up from a second-round knockdown and scored two knockdowns of his own en route to stopping Victor Ortiz in Round 4 of their rematch on Saturday at StubHub Center in Carson, California.

The battle of former welterweight titleholders was televised live on the Fox network in the U.S. It was a rematch of their 2011 showdown, THE RING’s Fight of the Year won by Ortiz via close unanimous decision.

“This was a fight that was looming in my soul for the last five years,” said Berto, who was coming off a unanimous decision loss to Floyd Mayweather Jr. last September. “It was a tremendous fight again.”

The two boxer-punchers traded knockdowns in the first fight and they did so again on Saturday.

Berto (31-4, 24 knockouts), a 32-year-old veteran from Winter Haven, Florida, was floored by a straight left in Round 2. Ortiz (31-6-2, 24 KOs), a 29-year-old southpaw who resides in Ventura, California, had been outboxing Berto to that point, stepping around the squat but powerful Floridian and landing clean lefts.

However, Berto stepped up his aggression in Round 3.

“He threw me off a bit and came out and boxed,” Berto told Brian Kenny during the post-fight interview on Fox. “He caught me sleeping for like two seconds. It was time to play catch-up, which is why I was just pressing, pressing, pressing.”

Earl in Round 4, Berto landed a huge sweeping right uppercut that dropped Ortiz and seemed to separate the wayward fighter from his senses. Ortiz made it back to his feet but had the same lost look on his face that he had wen he was beaten into submission by Marcos Maidana in 2009 and Josesito Lopez in 2012.

Berto stepped in with a crisp straight right that put Ortiz down again. The Kansas native got up again but did not seem to know where he was. Referee Jack Reiss repeatedly asked him if he wanted to continue before waving the fight off at 1:14 of the round.

It wasn’t Ortiz’s first implosion in front on national television. He unraveled against Mayweather in 2011, getting clipped by a right hand while trying to literally “hug it out” with the future hall of famer after being docked a point for blatant headbutts. He appeared to flat-out quit against Luis Collazo in 2014 after being dropped in Round 2 of their encounter.

Ortiz, who has split his time between boxing and Hollywood since the loss to Lopez, shrugged this latest setback off as getting caught by a blind shot.

“It was one of those punches you just don’t see coming,” he told Kenny. “I never saw that uppercut coming.”

Ortiz added that he’s not finished with boxing yet.

“My career’s been up and down for many years, I haven’t had a perfect career, but here’s the thing, I guarantee you every one of the fans out here tonight enjoyed my fight,” he said.

Berto, on the other hand, may have earned a shot at current WBC welterweight titleholder Danny Garcia, who was part of the Fox broadcast team. Berto and Garcia are both advised by Al Haymon, as are other top welterweights, including the winner of the Keith Thurman-Shawn Porter fight and Errol Spence Jr. All are potential opponents for Berto, but for now the veteran is content with evening the score with Ortiz.

“This is definitely my most satisfying win, not just as a fighter but as a man,” he said.