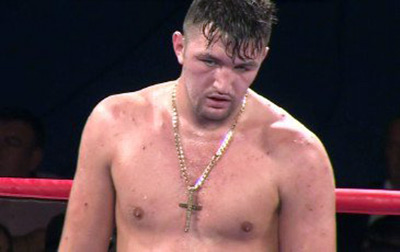 British heavyweight prospect Hughie Fury kept his unbeaten record intact with a seventh-round technical decision victory over Cameroon’s Fred Kassi in London, England, on Saturday. The official scores were 70-64, 69-66 and 69-65.

Fury, younger cousin of THE RING, WBA and WBO heavyweight champion Tyson, was boxing comfortably, if not exceptionally, through six rounds when an accidental clash of heads produced a gory gash over his left eye.

The Englishman’s corner seemed to have curbed the flow of blood between sessions but the referee, Terry O’Conner, waved the bout off after consultation with the ringside doctor early in Round 7.

“I felt the cut straight away but that’s boxing,” said Fury when interviewed by BoxNation in the UK. “I was a bit flat on my feet but no excuses, it’s a good learning experience. Kassi is an awkward opponent and there aren’t many people willing to face him.”

Kassi has the habit of making fighters look bad and tonight was no exception. The gutsy 36-year-old held former world title challenger Chris Arreola to a draw last July and pushed future IBF title challenger Dominic Breazeale hard in a 10-round decision loss in September.

Fury (20-0, 10 knockouts) is a touch shorter and a touch lighter than his older cousin but be possesses some of the same old stuff. At 6-foot-6 and 231 pounds, he is light on his feet, quick with his fists and has a fluid style which is very difficult for opponents to read.

The world junior amateur champion has got several more gears to go through but, cuts aside, he was not at his best tonight.

An incredible fight at junior bantamweight saw the unbeaten Jamie Conlan (16-0, 10 KOs) become the Commonwealth champion with an eighth-round knockout over Anthony Nelson.

Unbelievable ebb and flow. Four knockdowns. A conclusive and unexpected finish. This was simply a domestic fight for the ages.

Nelson was down off a big right hand in Round 1 but landed one of equal force to deck his man in the third. Conlan, who is prone to facial damage, had limited vision out of his left eye from very early on but the injury did not hamper what became a habitually heroic performance.

The referee came close to stopping the action both ways due to the damage being inflicted and the fighting heart on display was something to behold.

Conlan was dropped by a terrific left hook to the body in Round 7 and the contest looked to have taken a permanent switch when Nelson followed up with a devastating assault.

But despite the give and take nature of the bout, nobody could have foreseen its sudden and dramatic ending.

In Round 8, Nelson let go with a right lead which Conlan slipped perfectly before whipping home a perfect left hook to the liver. The previously unbeaten Nelson slumped to his knees and the referee completed the ten-count with the stricken warrior requiring more time to refill his lungs.

Both men covered themselves in glory and no fight report can do this one justice. If you’re a fan of the sport then do your best to see it.

The unbeaten Liam Walsh (21-0, 14 KOs) retained his British junior lightweight title with a dominant eighth-round stoppage of Troy James. Walsh, a highly-skilled and sophisticated southpaw, was sharp throughout and forced the referee’s intervention following an unanswered bevy of blows which backed a cringing James into a corner.

Walsh is eager to face the best fighters in the world at 130 pounds.

Brother Ryan Walsh (21-1-1, 10 KOs) retained his British featherweight title with a fifth-round stoppage of James Tennyson. The Englishman decked his man in the second and closed the show with a devastating right hand to the solar plexus.