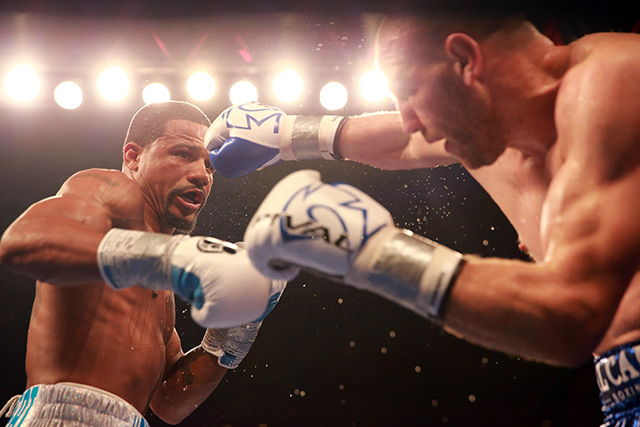 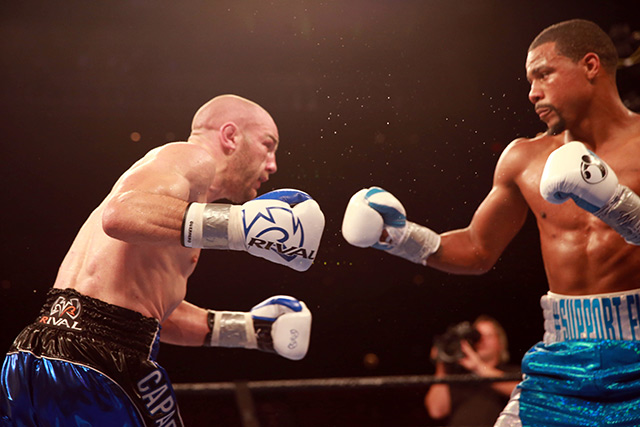 Andre Dirrell (R) got up from a second-round knockdown to soundly outpoint Blake Caparello on April 29, 2016, in Atlantic City. Photo by Dave Nadkarni/Premier Boxing Champion

Super middleweight contender Andre Dirrell defeated Blake Caparello unanimous scores of 98-91 in the 10-round PBC on Spike main event from the Taj Mahal Casino and Hotel in Atlantic City, New Jersey.
In a bout that started off with a lot of back and forth action, Caparello struck first with a left in the second round that sent Dirrell (25-2, 16 knockouts) to the canvas.
“The knockdown I got in the second round felt good,” Caparello (22-2-1, 6 KOs) said in a press release issued by the PBC. “I knew I had him hurt, but I wasn’t able to capitalize on it.”
Caparello again got Dirrell against the ropes and seemingly into a bit of trouble with a similar left in round three, but eventually Dirrell settled in and managed to gain control of the fight.
Dirrell, who lost a decision to James DeGale in a fight for the vacant IBF title last year, said, “My focus, determination and my drive got me the win tonight. I know I’ve got more work to do, but I never stopped grinding in there tonight.”
Caparello continued to go to work and battle, but it was clear who the ring general was from the close of the third round and until the final bell rang.
Dirrell, who a bronze medal in the 2004 Olympic Games, exclaimed, “I wanted to send the boxing world and this whole division a message. I’m coming for anyone with a belt. I’ll take on anyone who’s a champion. I know I’ll be a world champion. I have to be a champion. I don’t slow down for anyone. I’m going to keep pushing to get where I’m going.”
On his struggles in the later rounds, Caparello said, “I continued to look for the same left hand all night, it just didn’t come again. Andre has a lot of tricks, he is both good and fast. I am not happy with my performance.”
Dirrell concluded, “Tonight my brother and I were both able to display our talents in front of a national audience on Spike. Anthony is strong as an ox and got the win quickly tonight. I got the win on determination and heart. I had to use my toughness in this fight, and I pushed myself as hard as I could to get the win.”
In the second televised bout of the evening, former WBC super middleweight beltholder Anthony Dirrell (29-1-1, 23 KOs) met Caleb Truax (26-3-2, 16 KOs) in a scheduled 10-rounder.
Dirrell, who lost his title to Badou Jack last year, got off to a quick start, scoring two knockdowns in the first round, causing referee Harvey Dock to stop the fight at just 1:49 of the opening stanza. 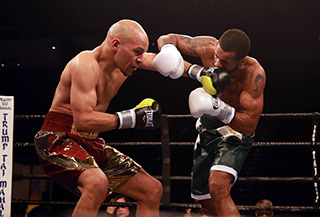 Dirrell said of the dominating performance, “What helped me tonight was landing my shots early. I was right on top of him with combinations and controlling my jab and that set the tone. I showed tonight that I work hard in the gym, and it paid off. If I work like I did this time leading up to the fight, then I know nobody can beat me.”
A stunned Truax said, “Everything was great leading up to the fight. I don’t know what happened tonight. He just caught me early. I think it was an overhand right.”
Reflecting on what the victory means for his struggling hometown of Flint, Michigan, Dirrell said, “My work tonight inside the ring made a big statement for what my brother and I are doing outside of the ring. A lot of people were watching tonight, and now they know a little bit more about what’s going on with the Flint Water Crisis back home.”
The opening televised bout featured undefeated knockout artist Jonathan Guzman (21-0, 21 KOs) continuing his hot streak in a 12-round super bantamweight title eliminator against Daniel Rosas (20-3, 12 KOs).
Guzman, an unbeaten fighter out of the Dominican Republic and now training in Massachusetts, stabilized early and easily controlled the action in the second half of the fight.
Guzman said, “I used a lot of concentration early and let him make errors so I could see what he was planning to do. Once I saw the mistakes he was making I let my hands go.”
Rosas was stunned in the third round, but Guzman was unable to close on the wobbled fighter. In the fifth round, Guzman landed a left that knocked Rosas back and followed it with another, dropping Rosas just before the bell.
“I wanted to let him throw some punches early. It helped me gain confidence and learn his tendencies,” said Guzman. “I saw him dropping that right hand, and I knew it would open up the opportunity for me to land my left.”
Rounds six and seven saw Rosas take a pummeling, but miraculously stay on his feet. At the end of the eighth frame, Guzman dropped Rosas for a second time, and again Rosas was saved by the bell.
However, referee Benjy Esteves had seen enough and stopped the fight following the close of round eight.
When asked about the stoppage, Rosas said, “The ref stopped the fight. I thought the fight should have continued, but he decided to stop it.” Rosas continued, “(Guzman) knocked me down, but I kept on fighting. I was never hurt. Guzman is a strong fighter, but I felt I could have continued and come back in the rest of the rounds.”
The fight card was promoted by King’s Promotions.