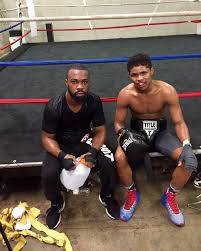 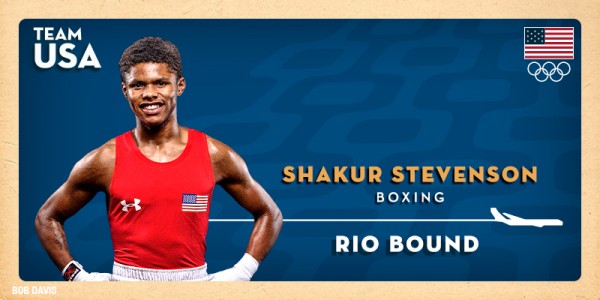 Shakur Stevenson is often mentioned as a future star in boxing. And the current stars have taken notice.

The slick southpaw is viewed as America’s best hope to strike gold at the 2016 Olympic Games in Rio. But it already feels as though Stevenson has arrived thanks to his exploits in the ring — as well as his budding friendships with some of the sport’s best, who likely see in Stevenson a little of themselves at a young age.

Before he even qualified for the 2016 Games, the 18-year-old southpaw had already Facetimed with Andre Ward, talked trash and sparred with Terence Crawford and posed for pictures with Errol Spence Jr., who told Stevenson’s publicist for USA Boxing he’s a fan.

Stevenson predicts he will turn pro after the Summer Games in August. Still, his talents have attracted the notice of several of the world’s top fighters who have taken him under their wing big-brother style and given the bantamweight advice on what he can expect in the paid ranks.

“Terence Crawford always calls me,” Stevenson told RingTV.com of the WBO junior welterweight champion. “He a real cool dude. He calls me just to talk smack. I sparred him before. He beat me up.”

Stevenson, who spoke at a media workout at Gleason’s Gym in Brooklyn on Monday, said Ward Facetimed him to offer words of encouragement. “He gave me a little motivational speech,” Stevenson said of the last man to win gold for the U.S. in 2004, who told him: “‘Man, just stay focused, make sure your head is right when you get inside that ring. Stay focused on what you have to do and go in there with the attitude that this is your tournament.'”

Stevenson, who was named after the rapper Tupac Shakur, said Spence basically told him the same. The Newark, New Jersey native attended Spence’s five-round destruction of Chris Algieri on April 16, and was surprised to discover that Spence, a former Olympian has followed Stevenson’s accomplishments from afar. “I just met him for the first time at the fight and I guess he told Julie (Goldsticker, publicist for USA Boxing) he was a big fan of me,” Stevenson said. “That’s crazy. He’s cool. I’m glad I went to his fight and I’m glad I got to meet him after and take a picture with him. He even put the picture on (Instagram). I was hyped about that.”

Stevenson has the resume to back up the attention he’s received. He’s 23-0 against international competition after winning gold at the Americas Qualifier in Buenos Aires, Argentina last month. The oldest of nine brothers and sisters, Stevenson was also voted the most Outstanding Boxer at the 2016 U.S. Olympic Team Trials, and he is a former 2014 Youth Olympic Games gold medalist.

Stevenson says the experience of sparring with Crawford as he prepped for his title fight with Hank Lundy on Feb. 27 makes him believe he can handle himself against anyone this summer. Stevenson said he even told Crawford “I would beat him up” before they sparred on two separate occasions at Crawford’s camp in Colorado Springs, Colorado, just a 15-minute drive from the U.S. Olympic training facility. Stevenson and his Olympic teammates report back on May 4 to start camp.

“It’s cool sparring Terence Crawford,” Stevenson said. “I started talking mad trash. I told him I would beat him up so then I went over to his gym. As soon as I got there, he started talking smack to me, like, ‘Oh, what you going to do now?’ I got in there and we started sparring. So I’m thinking I’m doing something at first and then everything just turned the opposite way and he just started beating me up. He didn’t try to hurt me but he just showed me that he’s Terence Crawford and I’m Shakur.”

Stevenson says he also sparred eight rounds with WBC featherweight titleholder Gary Russell Jr. this past January. “Of course it gives me confidence,” says Stevenson of the work, “because I feel like if I can hang in there with them I can get in the ring with these amateurs — and I can definitely hang with these amateurs.”