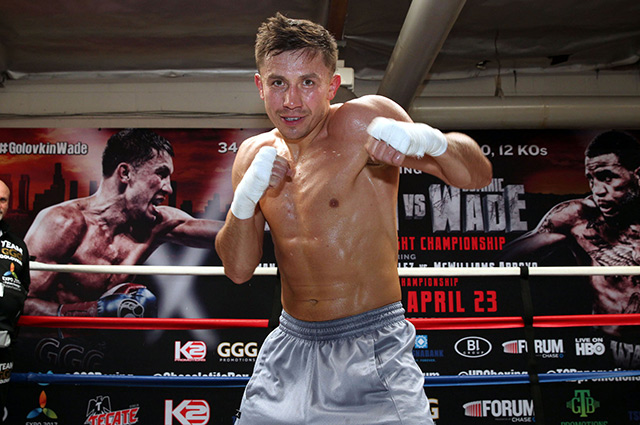 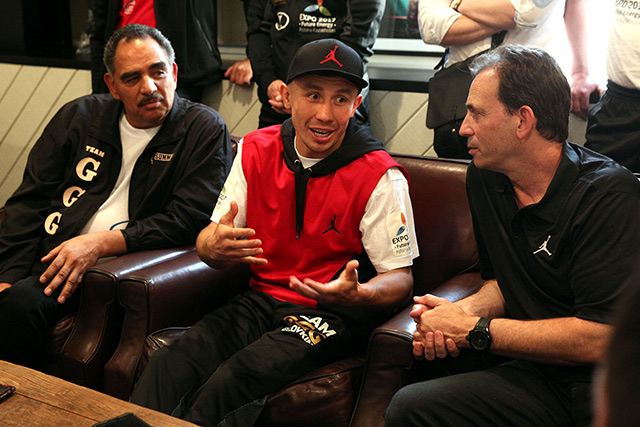 Left to right: Abel Sanchez, an animated Gennady Golovkin, and Tom Loeffler answer questions from the boxing media prior to a media workout for Golovkin’s April 23 fight with Dominic Wade. Photo by Chris Farina / K2-GGG 2016

SANTA MONICA – Gennady Golovkin is on his way to selling out another major arena in a major U.S. market. The last time he did this was six months ago, in his most recent fight, an eighth-round TKO of David Lemiuex, inside a completely packed Madison Square Garden.

The undefeated (34-0, 31 knockouts) middleweight titleholder from Kazakhstan, who added the IBF belt to his WBA strap when he beat Lemieux, is expected to pack the house again on Saturday at The Forum in Inglewood, California, where he will defend his titles against IBF mandatory Dominic Wade.

Wade is undefeated (18-0, 16 KOs), tall, rangy and talented, but the 26-year-old former U.S. amateur standout from Washington, D.C., isn’t expected to last half as long as Lemieux did. So the media that will cover the HBO-televised fight wanted to talk about other things when they sat down with Golovkin before a media workout at the Wild Card West gym on Wednesday.

Esteemed members of the boxing press wanted Golovkin to talk about his growing fame in the U.S., his stature in his native country, his pending superbout with Canelo Alvarez, even his thoughts on becoming the “face of boxing.”

Golovkin smiled, chuckled, and responded to each question as best he could in his still-developing English, dragging the media back to the present – and his task at hand (fighting Wade) – with each answer.

“Today, no, I don’t feel (that way),” said Golovkin, who was decked out in gear provided by Nike Jordan Brand, which recently signed him to a multi-year endorsement deal.

“Maybe in the future.” 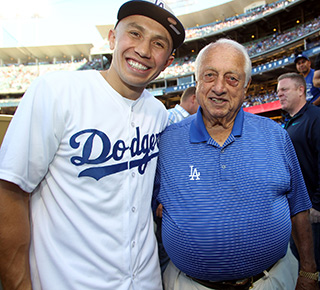 Golovkin said he’s taking it all in stride – the Jordan Brand deal, tossing out the first pitch at Dodger Stadium (for the third time) this past Sunday, the growing fan support and media demands, hero status in Kazakhstan, the hype around his inevitable clash with Canelo – and enjoying the ride as much as he can but never forgetting who he is and what he does for a living.

“I’m very happy about the Jordan Brand deal,” he said. “For me, it is the brand of the best players in the NBA, the best athletes in the world, the Olympic champions.”

Is the deal a confirmation that corporate America views him as boxing’s best active fighter?

No, he says, that’s for the fans to decide. Golovkin won’t even concede that he’s the best fighter in his division until he collects all of the major 160-pound titles to prove it. And he refused to overlook Wade, who is as much as a 70-to-1 underdog according to some online sportsbooks.

“Everybody has a chance,” Golovkin said. “I think it’s a good fight for us. I remember being in the same position Wade is in four years ago. I was hungry to prove myself. He is hungry. This is a dream fight for him.”

Abel Sanchez, who has trained Golovkin since 2010, says the 2004 Olympic silver medalist, who began his pro career in Germany, hasn’t changed since he was in Wade’s shoes.

“He’s the same guy,” said Sanchez. “He’s still the humble, hard-working boxer he was when he stepped off the plane from Germany to come train with me when he was 17-0 or 18-0.”

It didn’t take long for Sanchez, who trained hall-of-fame enshrined former junior middleweight champ Terry Norris among several other world titleholders, to realize that he was working with a special athlete.

“After nine months of training with Gennady up at the Summit (his gym in Big Bear Lake, California) I called (veteran sports writer) Robert Morales, who I went to high school with, and I told him that I have the best fighter I’ve ever trained right now.”

Golovkin was under the radar then. Fast forward almost six years, and the just-turned 34-year-old boxer-puncher has the kind of respect, prominence and career momentum that 15 (WBA) title defenses (five away from the division record), 21 consecutive knockouts and nine appearances on HBO will garner.

Can he get any bigger? Golovkin’s promoter, Tom Loeffler of K2 Promotions, spoke of building a “worldwide GGG brand.” Loeffler talked of Golovkin opening up other major U.S. markets, such as Texas, and fighting in the UK (where a future unification bout with WBO titleholder Billy Joe Saunders awaits). He said there is interest in bringing Golovkin to Korea (where his grandparents on his mother’s side were born) and, of course, fighting in his home country. Loeffler said Golovkin is the most accomplished athlete ever from Kazakhstan.

Golovkin, however, downplayed being a national hero. He likes being a role model to children but he’s not looking to be a cultural icon or politician as Manny Pacquiao is to his native Philippines.

“I like to inspire small kids,” he says of his visits to his homeland. “I like going to schools and talking to the kids to let them know that dreams are possible, but I’m not (into) being a hero or (an) idol in Kazakhstan.”

Politics? Not for Golovkin.

What is Golovkin’s dream? He’s achieved part of it. Packing Madison Square Garden and The Forum to capacity and thrilling those fans is one half of the dream that he, Sanchez and Loeffler have worked so diligently to realize. 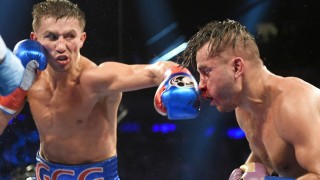 It took years of hard work in the gym, Golovkin says, but it’s really quite simple once he steps into the ring: “I come to fight, I bring Big Drama Show.”

He doesn’t just win, he conquers.

“I know about boxing for points,” Golovkin said. “I was an Olympian. I have a lot of experience with that style from the amateurs. It’s not interesting.

“I can go 12 rounds with my jab and just moving, but why would fans pay to see that?”

The other part of his dream is to be the undisputed middleweight champion of the world. He’s half way there. He still needs the WBO title held by Saunders, but the belt that hardcore fans are firmly fixated on is the WBC title held by Canelo.

The Mexican star vs. Golovkin, the middleweight juggernaut with the “Mexican Style”, is a bona-fide 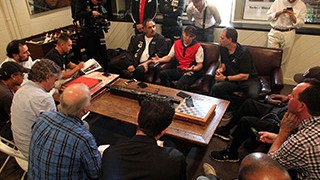 mega event and the fight scribes talking to Golovkin in the upstairs loft at Wild Card West were giddy with thoughts of the possible venues that could host the showdown. Dodger Stadium and AT&T Stadium were proposed.

Loeffler brought up the new T-Mobile Arena in Las Vegas, where Canelo and Amir Khan will fight on May 7.

Golovkin allowed the room to converse about the possibilities and then kindly brought everyone back to earth and April 2016.

“My focus is not the arena where I fight,” he said, “it’s the fight. There are lots of great arenas, maybe AT&T is a little better than most, but it really doesn’t matter.

Golovkin keeps it simple. Perhaps that’s the secret to his success.

The members of the media conceded that it was premature to talk about where a fight with Canelo might take place, but given recent statements made by Golden Boy President Oscar De La Hoya, they had to ask Golovkin when the fight – if ever – will take place.

“Ask Canelo,” said Sanchez, as his fighter and teammates got up from their chairs to do a few rounds of public mitt work in the ring downstairs.

GGG doesn’t just keep it simple, he keeps it real.