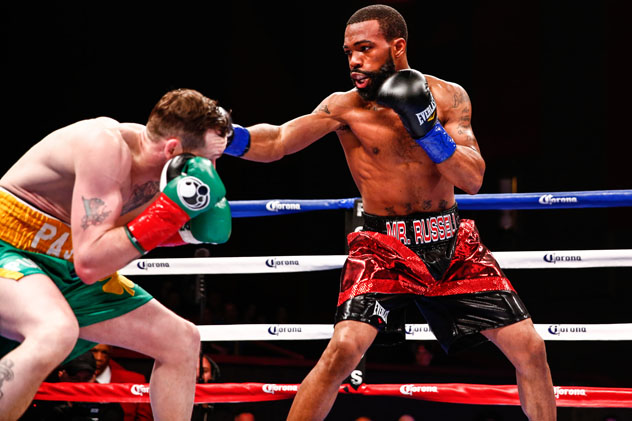 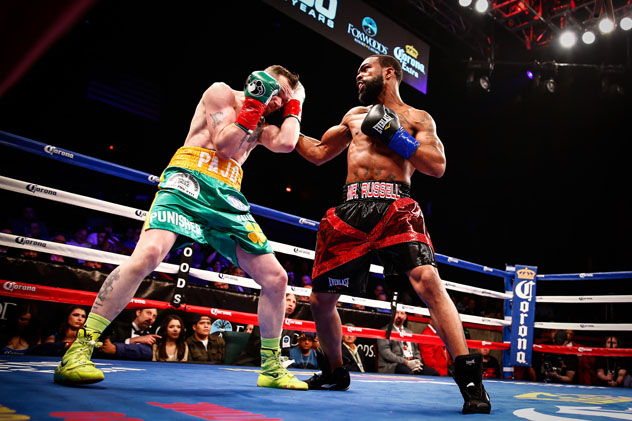 WBC featherweight titleholder Gary Russell Jr. reacquainted himself with boxing fans in a big way after over a year out of the ring, knocking Patrick Hyland down three times to bring the fight to a halt at 1:33 of round two in the first defense of his belt Saturday at Foxwoods Resort in Mashantucket, Connecticut.

Russell (27-1, 16 knockouts), of Capitol Heights, Maryland, was fighting for the first time since his fourth-round knockout win over Jhonny Gonzalez in March 2015. The 2008 U.S. Olympian wasted no time in establishing his significant speed advantage, landing at will on Hyland (31-2, 15 KOs), of Dublin, Ireland.

Russell landed with virtually everything he threw, knocking Hyland down with a right hook early in the second. Hyland, who had won four straight since losing a game effort to Javier Fortuna in 2012, rose up on unsteady legs and looked like an easy target for the 27-year-old American southpaw.

Russell went back to work, throwing with both hands against the stationary Hyland, landing another right hook high on the head of Hyland and sending him into the ropes for a second knockdown. Referee Danny Schiavone allowed the fight to continue but Hyland was severely compromised and was stopped after a third knockdown.

“We’ll love to get the fight against Lee Selby and unify. We’ll also love to face Leo Santa Cruz but please, if you’re watching this fight, Lomachenko, you’ve got to see me,” Russell said.

Russell may have to move up in weight to make a rematch, as the Ukrainian boxer is scheduled to face Rocky Martinez at 130 pounds on June 11.

Russell vs Hyland headlined a card that was televised on Showtime Championship Boxing. In the co-featured fight, IBF junior lightweight titleholder Jose Pedraza outfought Stephen Smith to retain his title via unanimous decisio