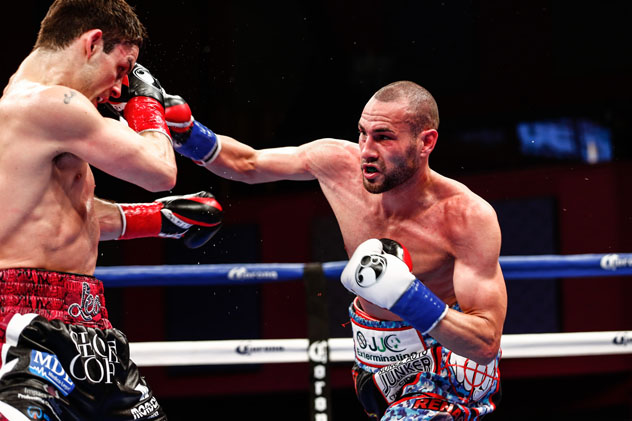 It wasn’t pretty but Jose Pedraza got the job done once again, outpointing Stephen Smith for the second successful defense of his IBF junior lightweight title Saturday at Foxwoods Resort in Mashantucket, Connecticut.

Pedraza, 26, of Caguas, Puerto Rico, had a field day in Round 2, landing at will with his left jab, rocking Smith’s head back repeatedly and setting up pot shots with his off-beat rhythm. Smith, 30, of Liverpool, England, found his way back into the fight by the fourth as he began to move and set up counterpunches of his own.

Still, Smith, one of four boxing brothers that include current WBO junior middleweight titleholder Liam Smith, had difficulty building momentum due to the herky-jerky movement of Pedraza, who was looking to reinforce his championship credentials after a rocky first defense against an aging Edner Cherry last October.

Pedraza rocked Smith at the end of Round 7 with an overhand right and never allowed him back into the fight after the knockdown.

“I knew that that right hand had hurt him but I knew he was a tough fighter so I was always aware to make sure that he didn’t counterattack,” said Pedraza, who is rated No. 7 at 130 pounds by THE RING.

The loss ends an 11-fight winning streak for Smith, whose only other loss was an eighth-round technical knockout against Lee Selby in 2011.