Errol Spence Jr. will be in a New York state of mind on Saturday 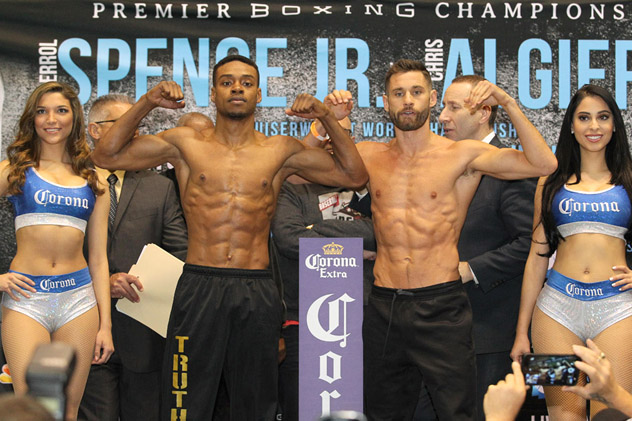 Errol Spence Jr. speaks in a Southern twang. He’s almost preternaturally calm. The soft-spoken 26-year-old who grew up in DeSoto, Texas, looks you straight in the eye and smiles when he meets you.

One of the advantages his opponent, Chris Algieri, is thought to have going into their welterweight clash on Saturday is that Algieri is from the New York area. He grew up in Long Island and is expected to have a large swath of vocal fans in his corner at Barclays Center in Brooklyn.

But Spence, one of the top prospects in the sport and a favorite of Floyd Mayweather Jr., didn’t hesitate to sign off on the fight because he knew he wouldn’t be conceding the home-court advantage entirely to Algieri, a former titleholder.

Spence was born in Long Island and still has strong ties to the area. Though he left the region when he was 2 years old to move to Texas, he has a grandmother, aunts and uncles and tons of cousins spread across Long Island and the Bronx, he says, making the event on Saturday on NBC (8:30 p.m. ET) a sort of homecoming. Spence-Algieri headlines a Premier Boxing Champions tripleheader.

Spence (19-0, 16 knockouts) said he has especially strong links to Long Island, with family from Brentwood, Copiague, Wyandanch, and even Huntington, where Algieri (21-2, 8 KOs) is from. As a result, he expects a large cheering section.

Spence said he visits the New York area probably twice a year. Knowing the types of demands that family can have, he opted to stay in a hotel this week to avoid distraction. “They know their boundaries, they know it’s fight week,” Spence said. “It’s close to the fight so I have to stay focused. I call my mother and my mother will call and text me with something if it’s worth telling me or asking me.”

Spence said a win against Algieri will be all the more gratifying because of the proximity of so many family and friends. He couldn’t say how much family he expects to show up to Barclays, other than it will be a lot.

“It definitely makes it more special because I have a lot of family here who can’t afford to go out of town to go see my fights,” Spence said. “So it makes it special for them to see it live and for me to put on a great performance on a big card on like this and just sharing it with them is special.”

Does he think he will draw more fans than the popular Algieri? Spence allowed that Algieri could have an advantage in the overall numbers — but it will be slight. “He lives here, went to high school here,” Spence said. “He should have more fans than me. But I should have my fair share, too.”