Jesus Soto Karass-Yoshihiro Kamegai ends in a draw; nobody complains 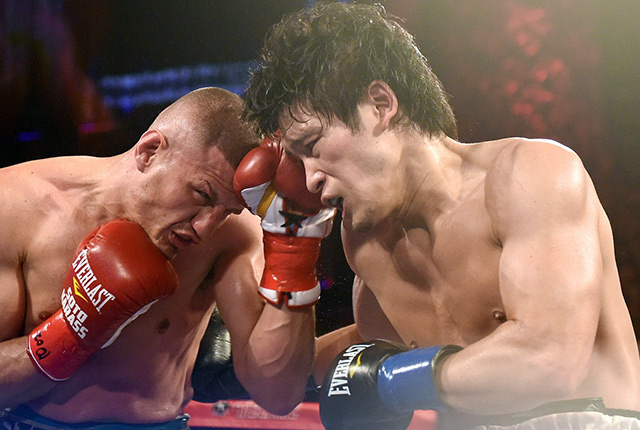 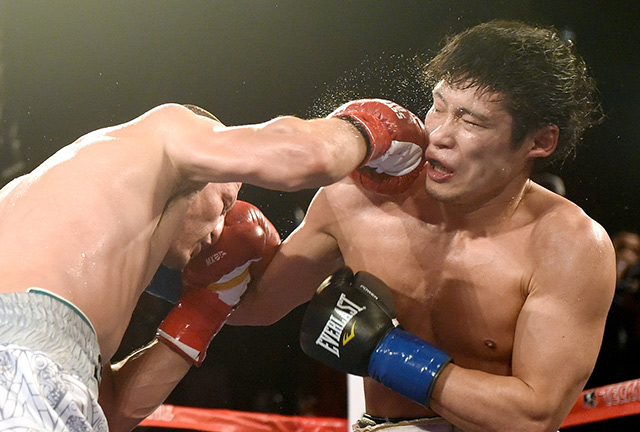 What is there to say? Every once in a while, boxing keeps its promises.

In the biggest edition of Golden Boy Promotions’ “LA Fight Club” yet, in front of a sold-out Belasco Theater in downtown Los Angeles, Jesus Soto Karass and Yoshihiro Kamegai began hammering each other five seconds after the opening bell and didn’t stop until the fight ended in a draw 10 rounds later.

This was a battle between two experienced professionals, without a doubt – not exquisite craftsmen, sure, maybe even a little crude compared to certain fighters, but each man brought a varied arsenal and delivered it with intelligence. John Henry needed skill to wield his hammer too. It’s not the point of the story. This was not about talent or technology; it was about will.

Kamegai (26-3-2, 23 knockouts), 33, was cut early in Round 2 by an accidental headbutt and for a moment it seemed like the fight would turn into a bloodbath. How it didn’t is sort of a mystery, considering the number of powerpunches landed, but some masterful work in the Japanese fighter’s corner prevented it from going that direction.

Kamegai pushed forward, but no matter where he pinned Soto Karass (28-10-4, 18 KOs) the punches kept coming back just as flush as they did in the center of the ring, where it was toe-to-toe warfare. They both delivered and somehow received every punch in the book, many times. There were ebbs within ebbs and flows within flows. Referee Wayne Hedgepeth was largely irrelevant.

The best way to put it: Watch the replay. 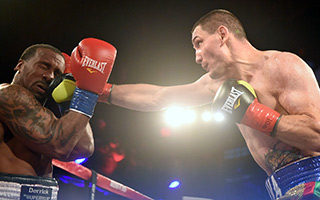 Unfortunately for Findley, the match-up was a T-Rex vs. a condor, in terms of reach, and he couldn’t overcome the limitations of his own stocky, 5-foot-6 frame to get close enough to “Slava” for any meaningful work. For his part, the 28-year-old Ukrainian, now based in Los Angeles, managed the gulf between himself and Findley well, working a nice jab and then stepping forward to attack with occasional combinations.

It was a low-key but effective performance, ending with Raul Caiz Jr.’s decision to call the fight off between rounds after Findley absorbed some sharp hooks to the midsection and sank to his haunches just before the bell. The win was Shabranskyy’s follow-up to his majority decision victory over the very capable Yunieski Gonzalez, who, before that, had lost a much-criticized decision to Jean Pascal.

On the undercard, Jonathan Navarro (5-0, 4 KOs) employed a withering body attack to soften up Tavorus Teague (3-11-2, 2 KOs) for a knockout at the end of Round 2 in a scheduled six-round welterweight bout. A thumping left hook below Teague’s ribcage about a minute into Round 1 set the tone. Teague went down and it was called a slip but the effect was evident on the 28-year-old’s face.

A 19-year-old member of “Generation B,” having fought all his pro bouts at the Belasco, Navarro continued to assault Teague’s obliques and scored a legit knockdown with another body shot in Round 2. With Teague’s legs effectively gone at that point, Navarro capitalized with head shots just before the bell. Teague managed to stay upright with some help from the ropes but was clearly not all there as he wobbled back to his corner, where he remained seated as the fight was called off.

Jousce Gonzalez looked good in his pro debut but it was a brief look. The rangy junior lightweight from a fighting family in Glendora, California, needed just 1:23 to take care of Jose Noe Perez (0-4), including three knockdowns.

Making his own pro debut, Miami super middleweight Niko Valdes also scored three knockdowns and a first-round knockout against Roberto Ramirez (0-2), whose midsection offered a nice, soft target. The third knockdown was just a formality, as the real fight-ender was knockdown No. 2, the result of a perfectly placed left to the gut.

And in the third debut of the night, lightweight Genaro Gamez continued the pattern, giving a glimpse of some promising skills before dropping his well-chosen opponent, Archie Weah (1-6), for the knockout at 2:29 of Round 1.