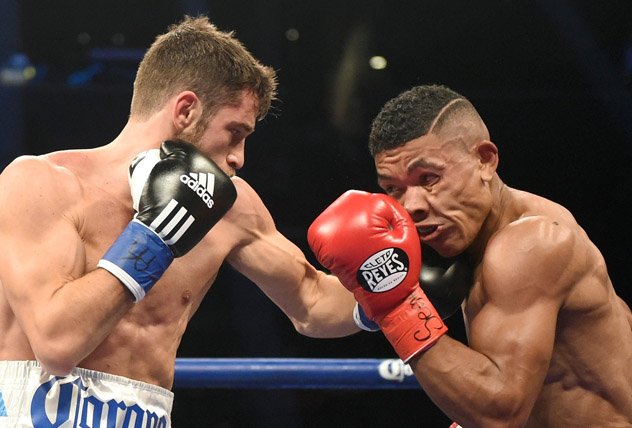 Errol Spence Jr. and Chris Algieri will battle for position in the welterweight division on Saturday at Barclays Center. But on Friday, they just battled for position on the stage following the weigh-in.

A tense but respectful relationship showed signs of fraying as both made weight at the Paramount Theatre on the campus of Long Island University in downtown Brooklyn. They then stood at the lip of the stage to pose for photos. As both Spence and Algieri flexed their muscles, their elbows touched, causing both men to briefly jockey for position as they held their pose, both men unwilling to cede any space. Spence actually pushed Algieri’s arm down as New York State Athletic Commission executive director David Berlin moved to separate them.

After a couple of moments, they separated and moved away, both men proving their point. The moment didn’t escalate and soon faded, though Spence (19-0, 16 knockouts) did stare briefly at Algieri (21-2, 8 KOs) as if he had violated an unwritten rule of weigh-in protocol. The two will headline Saturday’s NBC (8:30 p.m.) Premier Boxing Champions card.

“It seemed like he was trying to get position on me,” Spence, who tipped the scales at a ripped 146.4 pounds, told RingTV.com. “Basically, he tried to body me. I wasn’t having none of that. I wasn’t surprised. I didn’t care, actually. I welcome it. The fight been on, so it don’t matter what he do. I’m in there to hurt him.”

Algieri, who also looked shredded at 145.6 pounds, declined to comment on the minor incident. The other fighters on the televised undercard also made weight. WBO cruiserweight titleholder Krzysztof Glowacki, who won his belt with a sensational 11th-round comeback knockout against Marco Huck, hit the scales at 199 pounds. His opponent, former titleholder Steve Cunningham weighed 199.2.

In the opening televised bout, former U.S. Olympian Marcus Browne (17-0, 13 KOs) weighed 174.6 pounds while Radivoje Kalajdzic (21-0, 14 KOs) was 173.6 ahead of their light heavyweight crossroads bout. Brooklyn prospect Chis Colbert (4-0, 2 KOs) is off the card after his opponent, Erick Lainez (1-2) was removed for medical reasons.