Victor Ortiz says Berto rematch will be his ‘rebirth’ 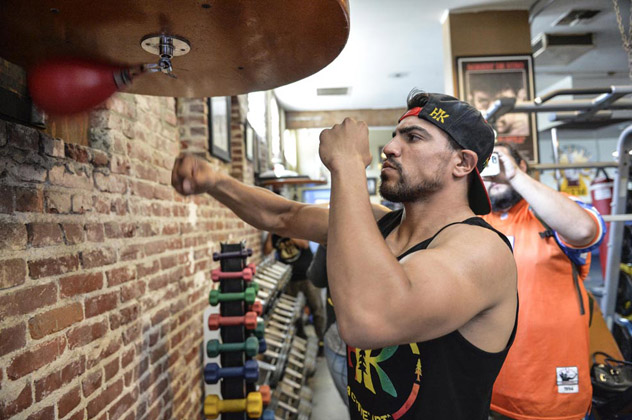 Victor Ortiz is on the home stretch as he approaches his April 30 rematch with Andre Berto, and the verbose 29-year-old boxer-actor said at a public workout on Thursday in Carson, California, that he’s confident of winning more decisively this time around.

“I made a lot of mistakes that night but I did enough to get the victory. I always said if I ever got the rematch, I would end him and now I have the chance,” said Ortiz in a press release issued by Premier Boxing Champions, which will broadcast the fight on Fox. “Berto had an off night. I wasn’t at my best either, but I destroyed him regardless. This time we’ll both be at our best.”

Ortiz has fought only five times since, partly due to some Hollywood success with roles in “The Expendables 3” and “Southpaw.” But even before then his commitment to boxing had been doubted by some, going back to 2009 when he declined to continue against Marcos Maidana and lost by sixth-round surrender. He said afterward, “I’m young, but I don’t think I deserve to be getting beaten up like this.”

As an explanation for his actions, those words didn’t go over so well. Up to that point the fans had rooted for the Midwest kid with the harrowing childhood – he’d caught lots of undeserved beatings in his life. But calling a stop to this one had broken the code and he was labeled a quitter. Saying what he said made him a pampered quitter.

Still, he remained compelling – in many ways because he seemed so conflicted. He was both spoiled and misunderstood, overrated and underachieving. Some were amused by how the happy-go-lucky “Vicious” acted in front of the camera; sometimes he seemed hell-bent on malice and other times he sounded like he’d just seen a double rainbow – sometimes he managed both at the same time. Others didn’t know what to make of the spaced-out Kansan as he moved from gig to gig. The less said about FaceLube the better, but Ortiz had a goal to be in movies and he made it happen. He was bashed and applauded for it. More importantly, a lot of people still believed his obvious talent and strength would see him through if he could just get his head together. But the setbacks kept coming and the criticism kept growing.

Two years after the Maidana fight Ortiz grabbed the WBC welterweight belt with the Berto victory, but in his first defense got clocked (some would say sucker-punched) by Floyd Mayweather Jr. in the fourth round. Nine months later, an undersized Josesito Lopez broke Ortiz’s jaw and Ortiz called it a night on his stool in Round 9. Ortiz wore the scarlet “Q” for another 18 months after that loss, then returned to fight Luis Collazo and got knocked out in two rounds.

After that it was pretty much back to the Minors. He’s gotten a couple wins under his belt since then – knockouts of two overmatched opponents – and weathered a hand injury, but now the road has led back to Berto and Ortiz (31-5-2, 24 knockouts) says it’s a new beginning.

“Of course there are haters out there, but I don’t pay attention to any of that. I’ve found that a good, positive attitude goes a long way,” he said. “It doesn’t matter what people say. What matters is what I want, what I’m going to do. April 30 is going to be the rebirth of me.”

He emphasized “rebirth” by saying, “For the next three or four years I am going to be 100 percent focused on boxing,” and that he’ll be in the hunt for a world title after this fight. But given the questions still surrounding him, maybe “redo” is what he’s actually seeking. Maybe he sees this as his “Back to the Future” moment where he gets to go back to the night he beat Berto and then change everything after that. If he can still beat Berto, that is.

Of course Berto (30-4, 23 KOs) isn’t exactly rock-solid either. The word “shot” has been thrown at him for years, but he did manage to KO the guy who broke Ortiz’s jaw last year – so there’s that. He even won a couple rounds against Mayweather in September. In many ways he is now the reflection of Ortiz – first the heir apparent, then the emperor with no clothes. Regardless of whether we see a rebirth or a reaffirmation, it is somehow fitting that the two former titleholders should meet like this.

Ortiz put it all in perspective with his singular brand of love and violence:

“We have been through a lot in the last five years. He hates me. I have no hate in my heart, but I know it’s a sport. I’m not leaving that ring without a victory.

“It’s a sport. It’s not personal. Two guys going back and forth. I want to rip his head off and he wants to rip my head off. Its nothing personal. We can go get a burger after the fight.”