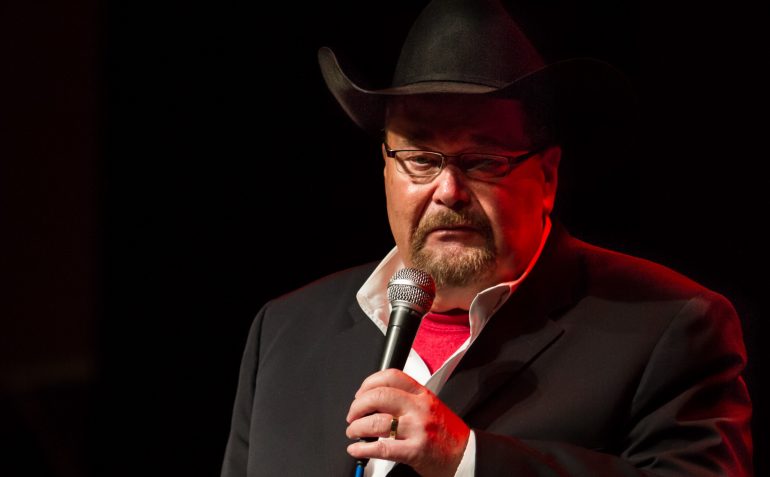 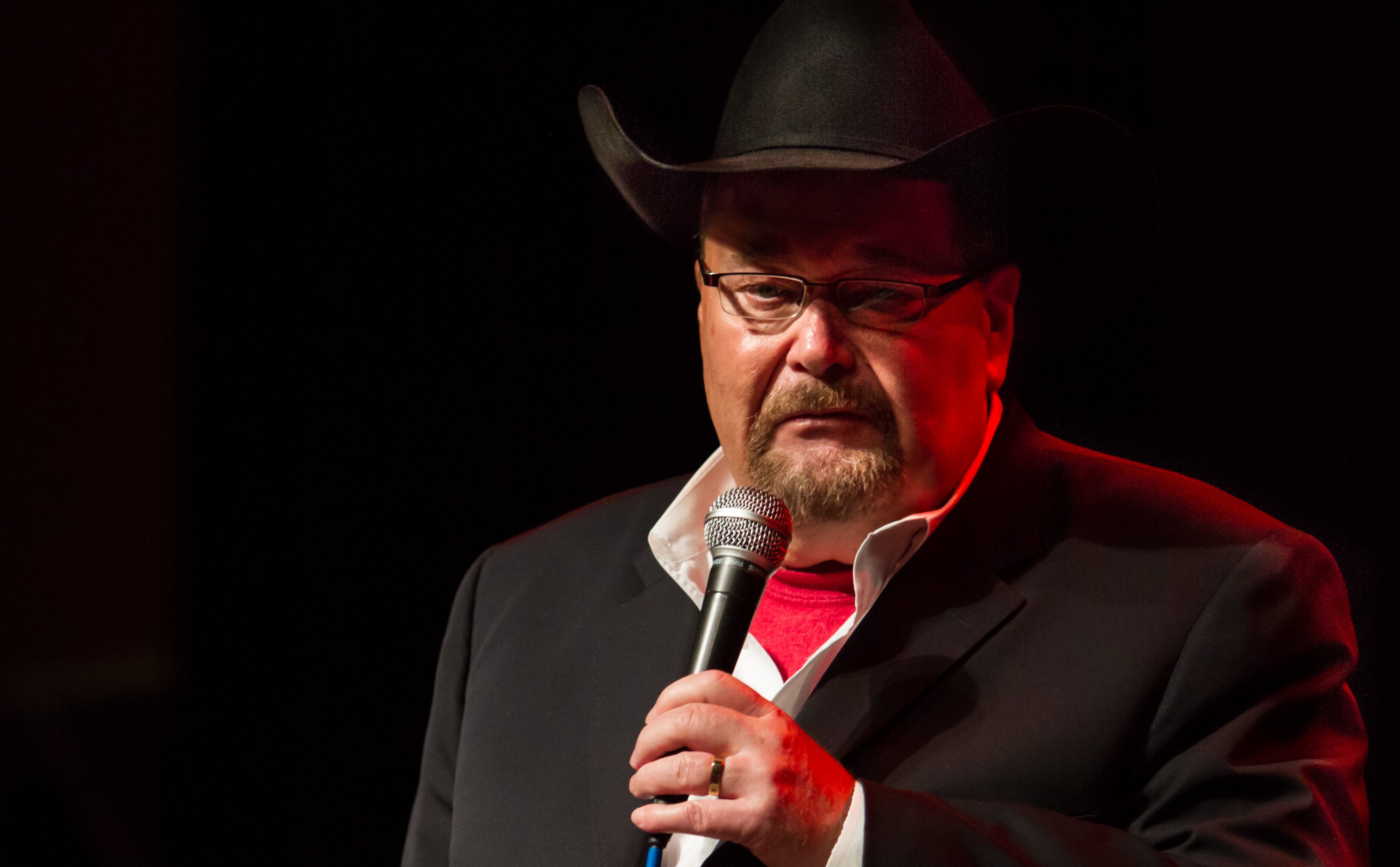 The Saturday evening fight card called “Knockout Night At The D” topped by Chris Van Heerden against Steve Claggett is, to be candid, in tough.

I offer that the “Knockout” event, portions of which will run on CBS Sports Network, shouldn’t be summarily dismissed and has at least one intriguing and novel element going for it: WWE fixture Jim Ross, known as “Good ol’ JR,” will be working the show, doing blow-by-blow.

This isn’t his first boxing show; the 64-year-old broadcaster told me. He did one for FOX Sports 1; the CBS crew watched it – and liked it.

That said, Ross, no stranger to the current culture of everyone being a critic in their social media platform, understands his presence will be seen to some as a sort of sign of the apocalypse.

“How many times have I done this? Not enough to make the hardcore boxing fans comfortable,” he said, chuckling with undaunted firmness. “But I’m 40 years in broadcasting, though I don’t want that to sound arrogant.”

He offers that he’s not coming to the sport with zero basis of knowledge. He recalls watching the real “Friday Night Fights,” with Don Dunphy doing the call, with his pop.

He’d like to work this show, part of a series, with some of the same flavor and resonance and respect seen in that era. “We don’t have the biggest names on the card, so I will be a storyteller, telling who they are as fighters, as human beings. Guys like us are storytellers. Telling people why they should care or not. I will have an expert by my side, the great Al Bernstein. He will give the hardcores everything they desire. I’m not there to be the expert. And I will not insult the production.”

In other words, Ross knows hardcores can be very particular about material or territory. He could be seen as an interloper, parachuting in, a stunt cast, like how they bring in celebs to get casual eyeballs at WrestleMania or as hosts at USA Network’s”Monday Night RAW.”

He attends to other questions I haven’t even posed. Like, Ross tells me he will be enthused but won’t stoop to hyperbole. A snappy left hand from Van Heerden won’t be “the nastiest launch ever thrown” or whatever. He is quite clear that the “entertainment” elements, the over-the-top flamboyance and all that, this isn’t the place for it. “These will be kids who are trying to break through, get to the next level,” Ross continues. “And I want to tell you who they are as human beings.”

I’m eager to hear his take because, far from being dismissive of him because he’s not been on this scene, I respect his insight highly because he comes from a place, WWE, formerly WWWF, then WWF, which has had a long run and has moved with the times and the culture and has had amazing staying power. “Hey, if I’m not good, I will hear it,” Ross says. “I’m here to give the sport a needed shot in the arm. All of us want to help build up boxing. This is one small step.”

The pro wrestling ethos is, of course, inside boxing. Floyd Mayweather Jr. became “Money,” a braggy guy 70 percent of his “fanbase” loved to hate, largely because he understood what Ross learned from Muhammad Ali. “The Greatest” dipped in and out of the wrasslin’ scene in the ’70s into the ’80s and respected the theatrical showmanship of the athletes, who knew the world is filled with more people comfortable rooting against things than for them. “I spent four days in a suite with Ali in New Orleans (Ali worked the room and did hits for WWF and competitors, like a 1985 card held at the SuperDome in Louisiana, by Mid-South Wrestling – later known as the Universal Wrestling Federation – months after he cameo’d at the first WrestleMania) and he told me, they spend more money watching you, hoping you lose than win.”

Ross says the atmosphere at the “D” show (the Downtown Las Vegas Event Center, officially), the set-up, the vibe, will be cool and current. The ring will be set up outside, under the stars, and will attract some Gen X and Y – and younger – rather than just old fart slot machine pullers.

The assignment is meaningful because Ross likes to test himself. Money isn’t the motivator here. Also, he will find himself recalling good times with dad, JD Ross, who died in the late ’90s. “My dad and I listened to the Ali-(Sonny) Liston fight, the phantom punch, in Maine. My dad was so irate. He’d fallen for the whole hype.” Ross knew early, like back then, that he wanted his voice to be on those clips of momentous occasions. He comprehended how meaningful it can be to take in sporting contests when you are invested in the players as beings. He and dad didn’t take copious breaks, growing up and working on a farm, but they damn well did for notable boxing matches and, of course, Oklahoma football games. Boxing lodged in his brain at age 10, when he watched Emile Griffith pummel Benny Paret to death on TV, on March 24, 1962. Dad was out with mom, Lizzie, and came home and thought li’l JR was into hyperbole, talking about Paret being destroyed so utterly. Bottom line: Ross has been a boxing fan, has seen all the ups and downs to be able to see the sport with a deep notion of its pluses and minuses, a committed one, though, like so many, has not stayed hardcore in this era of dilution, with 171 different weight classes.

The fights, promoted by Roy Jones Jr., kick off on CBS Sports Network at 11 p.m. ET. The South African Van Heerden, managed by Donna Keegan Avery, is 23-2-1 (12 knockouts), while the Canadian Claggett is 23-3-1 (16 KOs). I will be DVR’ing, as I told Ross, because I want to see his vision of how fighters should be introduced and how he believes the audience can be helped to care more. And I will know he will be doing the job for much more than money, so I will be quite emotionally invested. “My dad died when he was 64,” Ross finishes. “I’m 64. If there is an afterlife – and I like to think there is – I know dad will be watching the show.”

One side, Woodsy; it’s officially Coyote Time. OK, seriously? As the great Hacksaw Jim Duggan would call him during UWF broadcasts, Jimbo Rossy is being covered by RingTV.com?! Yep. It’s definitely a good time to be a content editor. Hey, let’s also not forget that JR has a VERY popular podcast, “The Ross Report,” available at Podcast One. You can also learn more about “Good ol’ JR” at www.jrsbarbq.com.