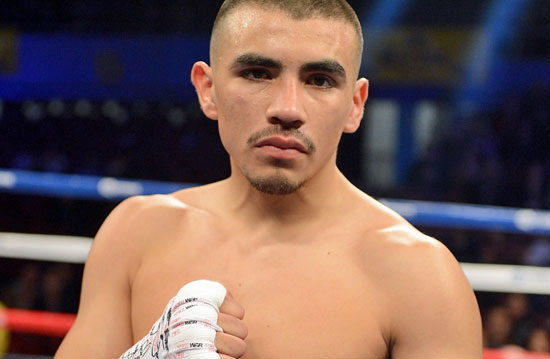 It’s not often a fighter is peppered with questions about his eating habits, but Frankie Gomez has had trouble making weight in his brief career and so the meddling into his sweet tooth-routines wasn’t a surprise.

After problems with over-eating, Gomez claims to have finally tamed his appetite and won the battle of the bulge ahead of his May 7 HBO PPV bout with veteran Mauricio Herrera on the undercard of Canelo Alvarez vs. Amir Khan. The card will take place at the new T-Mobile Arena in Las Vegas. Gomez vowed not to come into his welterweight bout (146-pound catchweight) a middleweight.

“Well, I didn’t blow up as much as my other fights,” Gomez said on a conference call on Tuesday. “I stayed in shape. I didn’t go up in weight, and I’m training hard and just focused 100 percent on the fight.”

That hasn’t always been the case for Gomez, a highly decorated amateur from East Los Angeles whom Golden Boy Promotions reportedly signed for $400,000 in 2010. While his talent has never been questioned, Gomez’s discipline at the dinner table has long been an issue.

His problems (and his physique) flared up last May when he missed weight by 6¾ pounds for a junior welterweight bout (141 pounds) with Humberto Soto. The fight was slotted as the HBO co-feature to Canelo Alvarez’s third-round stoppage of James Kirkland. Intended to be a launching pad of sorts for Gomez, the fight was instead canceled.

Gomez, who is trained by Freddie Roach and frequently spars with Manny Pacquiao, then had a fight scheduled for last October against Jorge Silva. He again missed weight, this time tipping the scales three pounds over the welterweight limit. The fight went on and Gomez won a wide decision. However, Golden Boy was so concerned about his weight issues, they had Gomez report to their Los Angeles offices and weigh-in before his last fight, in February against Silverio Ortiz, to make sure his eating was under control.

“Yeah, I did that for the last fight and it kind of helped me out,” said Gomez, who made the catchweight of 145 pounds and won a decision against Ortiz. “I don’t know that they wanted me to go in this fight. But even if they do, I’m ready. I’m like nine pounds, eight pounds away now, so just training hard for this fight and (I’m) focused.”

Gomez didn’t credit some extreme diet plan prescribed by Dr. Oz to his newfound ways. He has just monitored his weight to make sure he didn’t fluctuate too much between fights. “Yeah, the diet and stuff, but the most important thing was just that I didn’t blow up too high,” he said. “I didn’t go over like 10 or 15 pounds. Because before I would go up more than 25 pounds, 20 pounds, so that was one of the main things.”

Gomez was asked if he was worried Golden Boy might cut him loose if he fails to impress on May 7. Gomez seemed surprised by the question. After a brief pause, he said, “I don’t think so. My mindset is not that. My mindset is going in there (to) win and give everybody a great show.”

And if he does that, it will be a load off everyone’s shoulders.