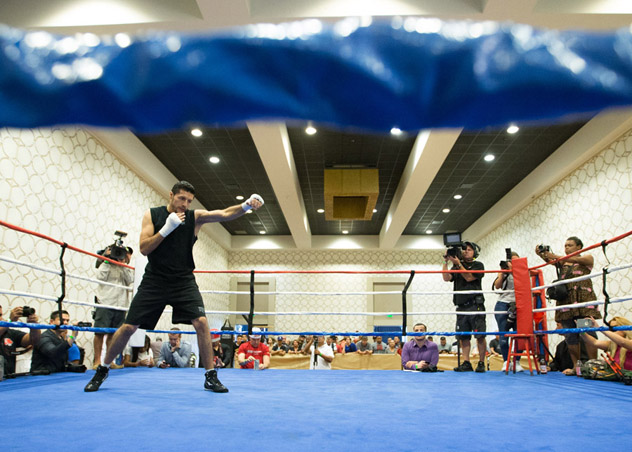 Jhonny Gonzalez can still pack a punch and believes he has one more run in him toward a world title.

Gonzalez claimed his 60th professional win as a pro late Saturday night, stopping Justin Savi in the second round before a raucous and partisan crowd at the Centro de Convenciones in Tlalnepantla, Mexico.

Few fans expected Gonzalez to be successful after losing his first two fights as a pro in 1999. After winning major title belts in two weight classes, Gonzalez could be on his way to a third.

He had to dispatch of Savi, who is from the West African country of Benin, but was 1-1 in two prior bouts entering Saturday.

Savi fought on but did not have the punching power and ring generalship to keep up with Gonzalez. A minute into the second round, Gonzalez hurt Savi with a barrage of punches. Gonzalez pinned Savi in a corner and let his hands go, prompting referee Laurentino Ramirez to stop the bout at 1:45.

Either Gonzalez drops down from 130-pound limit, at which he has fought in his last two fights, or Russell moves up in weight after his title defense against Patrick Hyland on April 16.

Either way, don’t hold your breath.

In the co-feature bout, former IBF junior middleweight titleholder, now welterweight, Carlos Molina (25-6-2, 8 KOs) won an eight-round unanimous decision over Reyes Sanchez (26-8-2, 15 KOs). Scores were 80-72, 79-73, and 78-74 in favor of Molina, who has won his last three consecutive bouts since his loss to Cornelius Bundrage.

Francisco A. Salazar has written for RingTV since Oct. of 2013 and has covered boxing in Southern California and abroad since 2000. Francisco also covers boxing for the Ventura County (California) Star newspaper, Boxingscene.com, and Knockout Nation. He can be reached by email at [email protected] or on Twitter at FSalazarBoxing.