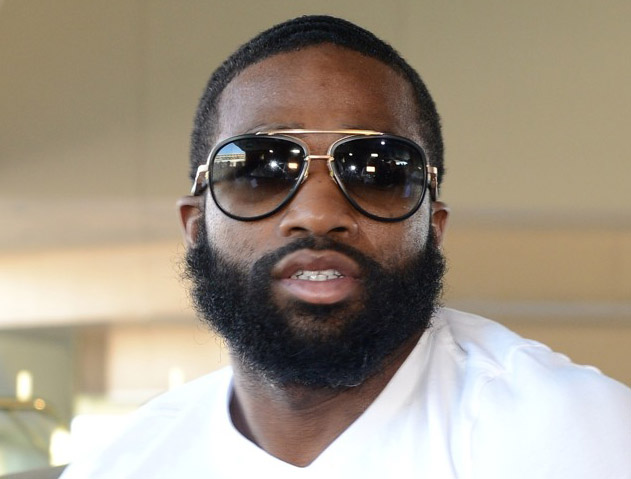 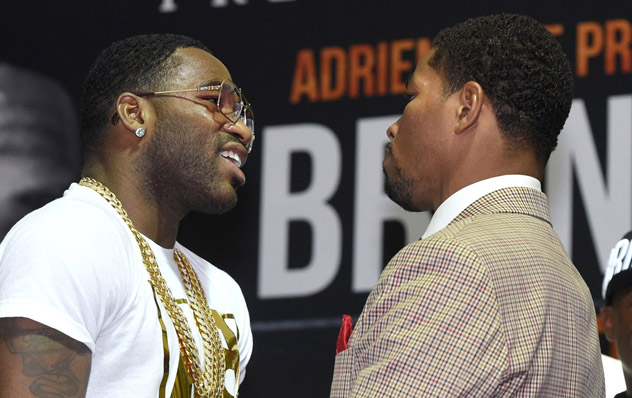 Adrien Broner and Shawn Porter face off before their 2015 fight. Photo: Naoki Fukuda

The attorney for the man who claims Adrien Broner robbed and beat him up outside a Cincinnati bowling alley questioned whether Broner should be allowed to fight Ashley Theophane in a junior welterweight title fight Friday in Washington, D.C., on Spike TV.

“I think that’s a question for the boxing commission: Do they want someone like this representing their industry, their profession? To me it’s a significant issue,” said Chris Finney, who is representing Christopher Carson in a civil lawsuit against Broner.

Finney also wondered why the warrant for Broner’s arrest was downgraded from nationwide to include only the state of Ohio, shielding him from risk of extradition back to Ohio if he’s picked up in Washington, where he remains. Julie Wilson, chief assistant prosecutor and public information officer for the Hamilton County (Ohio) Prosecutor’s office confirmed that the warrant was changed.

“I think it’s interesting that locally… who amended the arrest warrant and why?” Finney said in a phone interview. “Why did this rich guy get special treatment? Somebody pulled the plug and screwed things up.”

Wilson said Broner, who is in Washington, is expected to turn himself in after the bout.

“That is our understanding,” she said. “(We’ve received) assurances from his attorneys that he would turn himself in after the fight. Now if that doesn’t happen, we can always change the pick-up radius and it can be a different process.”

Broner was charged with felony assault and aggravated robbery after the 26-year-old allegedly beat and robbed Carson outside a Cincinnati bowling alley on Jan. 21, Cincinnati police said. Carson contends in a civil suit filed on Feb. 5 that Broner knocked him out after the two competed against one another in high-stakes bowling games and, when he awoke, he was missing $12,000 he had won in gambling bets. Broner has trained for his bout for Theophane in Washington.

Broner’s attorney is not listed in court records and could not be reached.

“I find it remarkable that they will allow a man who’s indicted for these charges to remain free,” said Finney, who also questioned the decision to grant Broner a license in spite of the arrest warrant. The D.C. Boxing and Wrestling Commission did not return numerous emails and calls for comment.

“Everybody is entitled to due process but there’s a whole ‘nother issue: Under what circumstances will Mr. Broner’s boxing license be suspended or revoked?” Finney asked. “I don’t know the answer to that. I don’t know boxing at all but I do know that years ago Mike Tyson’s (license) got suspended (in Nevada for twice biting Evander Holyfield) for a while so that’s what governs whether he’s allowed to fight or not. Again, I’m not out to ruin the guy’s life or prevent him from boxing or anything else. I just want him to stop slugging people. I want him to compensate my client for his injuries.”

Bob Bennett, executive director of the Nevada State Athletic Commission, said that because Broner has not been convicted of a crime it would be hard to deny him a license. “It’s a judgment call,” he said in a phone interview. “You have to weigh all the issues. Major consideration has to be taken into account if what he did will bring discredit to the commission. But he hasn’t been convicted yet. So you have to also consider that when you’re making your decision.”

Broner was scheduled to work out for the media on Tuesday afternoon but the event was canceled “due to the delayed arrival of flights out of Las Vegas,” a press release said. A press conference is scheduled for Wednesday and a weigh-in on Thursday before the fight at the D.C. Armory.

Mitch Abramson, formerly with the New York Daily News, can be reached on Twitter at: @Mabramson13.