Lanardo Tyner and the value of good sparring 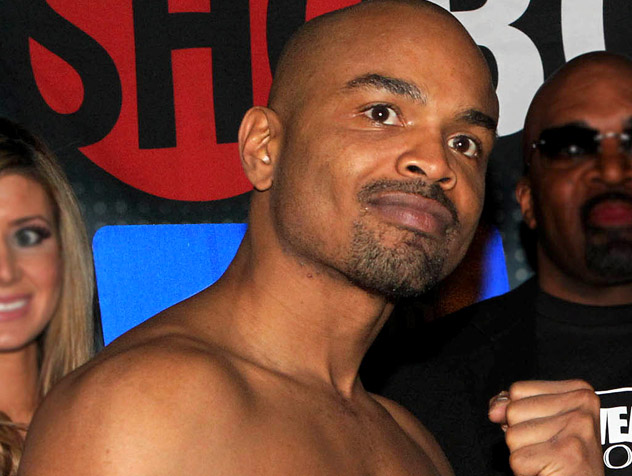 When Lanardo Tyner’s cell phone rings, it’s usually because somebody wants to beat him up.

Sometimes it’s a promoter who wants for him to be beaten up by their fighter du jour. But more often than that, it’s a fighter who would like to employ him to be beaten up, in order to prepare themselves to beat somebody else up.

There are plenty of boxers who will proclaim that they will fight anyone, anywhere, any time, and indeed, one who steps inside a prize ring for a living is likely brave enough to do just that. However, as any reasonable person who has a choice would, they would only take such risks under certain conditions. Is the timing of the fight right? Is the style of the opponent suitable? Is the money right?

For Tyner, the conditions are never perfect, yet when the calls come, he almost always says yes.

Over the past three years, “The Pain Server” has become of the sport’s most in-demand sparring partners, having worked with Floyd Mayweather, Canelo Alvarez, Danny Garcia, Keith Thurman and more.

Recently, that’s been somewhat out of necessity. Following his bout with Christopher Pearson on Feb. 28, 2014, in Verona, New York, both Tyner and his opponent tested positive for marijuana. On Sept. 4 of that year, the Michigan Unarmed Combat Commission passed a somewhat extreme motion to suspend Tyner’s license for two years, rendering him unable to fight in the United States.

On March 12 of this year, Tyner took the consolation prize of an exhibition bout against Shawn Porter, who wanted to stay active when his upcoming fight with Thurman was postponed due to an injury. It was a 12-round glorified sparring session complete with a referee, judges, and a cell phone camera streaming the bout on Facebook. Tyner was admittedly out of shape, and was mostly dominated throughout the session, but he remained on his feet and moving forward as often as he could for all 12 rounds.

“That’s the thing with me, guys know that whether I’m in shape, out of shape, whatever, I’m coming to fight and bring the pressure,” said Tyner.

It’s that mentality that kept him in the good graces of Mayweather during the final stages of his career. Tyner had just stepped out of the ring after pushing one of Mayweather’s fighters, Pearson, to the limit when he was approached by Floyd. The two had a conversation right there, ringside, before he walked to the locker room. The groundwork was laid, and Tyner was off to camp at the Mayweather Boxing Club in Las Vegas within weeks, and would return there leading up to all four of Floyd’s final bouts.

Mayweather’s lavish expenditures are highly publicized. Among them were his sparring partners, whom he paid in excess of $2,000 a week, plus additional perks and gifts along the way. Granted, Mayweather likes to overspend in general, but he typically likes to buy whatever he deems to be the best of anything. When it came to the fighters entrusted with getting him ready for an upcoming bout, he knew that shortchanging wasn’t the way to go.

“I want my sparring partners to be durable and skilled,” said former world champion Paulie Malignaggi. “Be on a level where I’m going to have to work if I’m going to beat the shit out of you.”

A look at any top fighter’s camp roster illustrates the importance and value of good sparring. Muhammad Ali’s list of sparring partners reads like a lineup of the best heavyweights in the generation that followed him, and the same goes for Wladimir Klitschko, who has employed everyone from Deontay Wilder to Tyson Fury.

Fury himself clearly took note. According to Adam Harris of Hennessy Sports, the man in charge of arranging sparring for the heavyweight champ, camp expenditures for his last bout exceeded $250,000. Said Harris, “Some of the guys in camp made more money sparring Tyson than they had in their entire careers.”

Following the Joe Louis-Max Schmeling rematch, A.J. Liebling penned a New Yorker profile on one of Louis’ sparring partners, George Nicholson, who at the time was considered to be the premiere heavyweight campmate. Liebling saw that particular camp, and the relationship between Louis and Nicholson, as monumental.

Nicholson made a very comfortable living bouncing between camps for other heavyweights such as James Braddock, but was mostly beholden to Louis. The Brown Bomber employed Nicholson as his lead sparring partner throughout his title reign, and also took him on a 100-day exhibition tour while both were enlisted in the Army during World War II. For a time, Nicholson became assistant trainer for Louis, in addition to helping Ezzard Charles in his preparation for Jersey Joe Walcott.

As for his own competitive career, Nicholson never put much stock in it at all. He finished with a record of 8-8-1, with his “highlights” being a pair of close decision losses to Buddy Knox. Nicholson recognized the difficulty in getting fruitful fights as a black heavyweight at the time, and that by focusing purely on sparring, he could make more money, and with headgear and his slick defensive style, could keep his wits intact. When Louis finally retired for good, Nicholson more or less retired as well, settling down with his family in New York City.

Tyner now faces a similar predicament. With Mayweather’s retirement, a major source of his income has dried up. At one point, Floyd even allowed him to double dip, leaving camp for one week in order to take a fight in Mexico against Antonio DeMarco, before returning to the gym the following Monday. But, unfortunately, now he has to move on with a lot of free Money Team paraphernalia and a good reference from Floyd.

In George Nicholson’s case, he never wanted more than his cozy career as a helping hand. Tyner meanwhile, wants to start focusing on his own career. At the age of 40, he may already be hitting his head on the ceiling, but he feels as though he owes it to himself to try.

“I just need somebody to help me out, man. I help these guys and spar, and don’t get me wrong, they’re paying me good, but I need a fight now, you know? I need my back scratched,” said Tyner.

Tyner will not have a chapter of his own in the history books when he retires, like some of the men he spars or fights on short notice, but his name should show up somewhere in the passages about them. Every time he answers the phone and says “yes,” he’s providing an invaluable service to the sport that he loves.

“Boxing needs us. Without us, the sport doesn’t work,” said Tyner.

Corey Erdman is a boxing writer and commentator based in Toronto, ON. Follow him on Twitter @corey_erdman.