Antonio Orozco blasts Miguel Acosta in one round 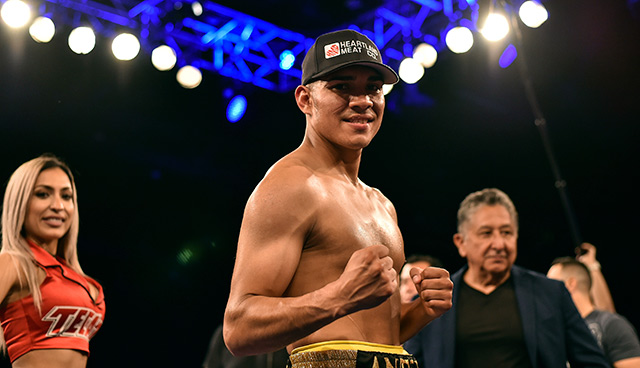 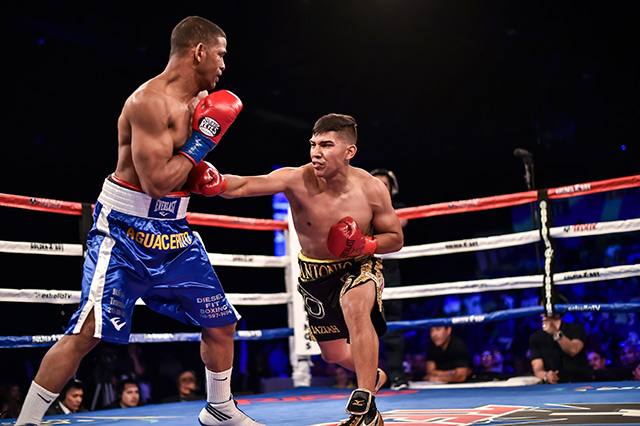 Antonio Orozco lands a right hand to Miguel Acosta’s body in the opening round of their main event on March 25, 2016. Photo by Lina Baker / See You Ringside Photography

Junior welterweight contender Antonio Orozco stopped former lightweight titleholder Miguel Acosta in the first round of their main event at Fantasy Springs Resort Casino in Indio, California on Friday.
Orozco (24-0, 16 knockouts), of San Diego by way of Tecate, Mexcio, dropped Acosta (29-9-2, 39 KOs), of Philadelphia by way of Venezuela, with left hooks twice in the opening round of the Estrella TV-televised bout, which was scheduled for 10 rounds. A non-responsive Acosta had the doctor call off the fight, awarding Orozco a victory knockout at the 1:54 mark.
“We take every fight seriously,” said Orozco. “We knew that Acosta is a former world champion, and we made sure to be as prepared as possible. Fortunately, I was able to go in there and execute my game plan and ended the fight early. I want to fight a few more times this year and am ready to take on the best in the division. I am ready for the title shot.”
“I knew Orozco was an aggressive fighter, and I felt very prepared for this fight,” said Miguel Acosta. “But I hesitated; I had a moment of doubt in the ring and that is where he got me. The left hook really stung me, but I got up because I thought I would have time to recover. Orozco came at me more aggressively, and I just couldn’t continue.” 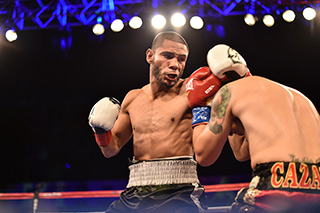 In the televised co-main event of the evening, Andrew Cancio (17-3-2, 13 KOs), of Blythe, Calif., made his debut as a Golden Boy Promotions fighter in a 10-round featherweight fight against former two-division world titleholder Hugo Cazares (40-9-2, 27 KOs), of Los Mochis, Sinaloa, Mexico. Cancio ambushed Cazares on the ropes and landed effective body shots in the first round. Cancio continued to dominate the fight as he knocked down Cazares in the third round. Cazares made the count and fought off Cancio throughout the exciting round; however at the 2:49 mark, Cazares’ corner call off the fight giving Cancio another technical knockout victory.
“I felt very strong in the ring tonight,” said Cancio. “After the long lay-off when I faced Rene Alvarado I felt rusty so I made sure to be very prepared against a former two-time world champion. I trained very hard for 10 weeks and it paid off. I was able to come back in the ring and show my strength. I am ready for the top of the featherweight division and ready for a re-match with Ronny Rios. I will talk to my manager and promoter and see what’s next. This is going to be an exciting year for me, and I can’t wait.”
“He was stronger than we anticipated,” said Cazares. “He surprised me with his aggressiveness, but I am not going to make that mistake twice. I am going to come back next time ready and not underestimate any fighter.”
Marco Magdaleno (2-0, 1 KOs), an Indio-based Las Vegas native, made the televised broadcast on Estrella TV in a four-round lightweight event against Tijuana, Baja California, Mexico’s Luis Silva (2-7, 1 KOs). The active scrap saw the fighters go at each other with Magdaleno delivering a devastating blow to Silva at 1:29 mark of the second round to win the fight by knockout.
“I am excited about the victory,” said Magdaleno. “I have been training for weeks and felt very prepared.” 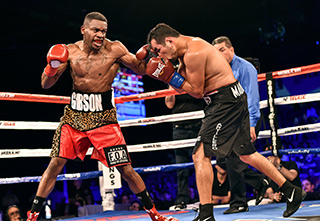 Also part of the bonus action of the night on Estrella TV after the main event of the evening, undefeated top prospect of St. Louis KeAndre “The Truth” Gibson (14-0-1, 6 KOs) participated in an eight-round super welterweight against Hector Velazquez (57-27-3, 39), of Tijuana, Baja California, Mexico. The fight stole the show as the most action-packed fight of the night, going to six-rounds before Gibson sent Velazquez to the mat to win the fight via knockout.
“I had a long training camp preparing myself for anyone who dared to get in the ring with me tonight,” said Gibson. “I knew that Velazquez was a veteran fight who was going to bring a lot of experience with him and I knew he was going to be resilient. I wanted to make sure I kept my distance and fought the fight I wanted to, and at the end of the night I am happy with the knockout victory. I am ready to step it up this year and go up to the 10-rounders.” 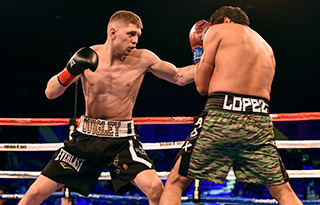 Part of the non-televised card but streaming live on RingTVLive.com, Irish knockout artist Jason “El Animal” Quigley (10-0, 9 KOs) proved true to his rising stardom knocking out Freddy Lopez (10-4, 7 KOs) in the first round of their middleweight bout.
“It feels good to get another victory this year,” said Quigley. “I am looking forward to continue the moment and staying busy in 2016.”
Emilio Sanchez (12-0, 9 KOs), of Pacoima, California, participated in a scheduled eight-round featherweight fight against Gustavo Molina (12-10, 5 KOs), from Tlaxcala, Mexico. Sanchez used an effect jab that saw Molina hit the canvas in the second round. Molina made the count but was stopped at 2:03 of the round by the referee as Sanchez unleashed an attack to win the fight via technical knockout.
“I made sure to listen to my corner, keep my distance and work the body and it paid off,” said Sanchez. “I am glad I added another knockout victory to my record and beating a fighter with more experience shows that I am progressing. I am hoping to add a 10-rounder by the end of the year and hopefully fight for a regional title early 2017.”
Opening up the night Jon Jon Dinong (2-0, 2 KO) of Los Angeles took on Jared Teer (2-6), of Olympia, Washington, in a scheduled four-round welterweight bout. Dinong and Teer kept-up a good pace exchanging blows throughout all four rounds of the bout. Towards the end of the fourth round, Dinong landed a right to Teer’s face that saw him hit the mat at the 2:10 mark of round missing the count, giving Dinong another knockout victory to add to his record.
Photos by Lina Baker / See You Ringside Photography. Quotes from Golden Boy Promotions press release.