MMA + NYC = A-OK. Will the landscape of combat sports change? 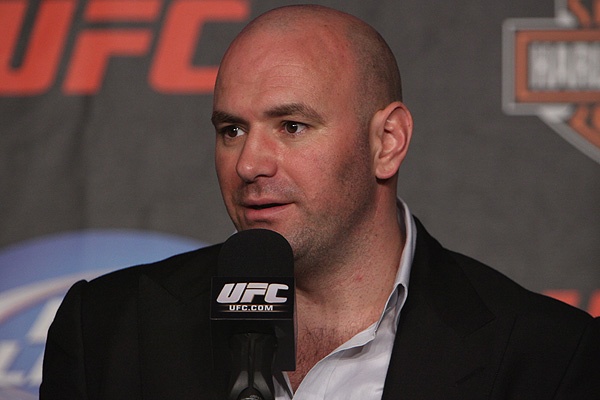 About. Freaking. TIME!
Mixed martial arts was banned from New York many moons ago when it was more of a fast and loose operation, not the well-oiled revenue behemoth it is today, with the backing of casino bosses the Fertitta Brothers and figurehead Dana White helming the Ultimate Fighting Championship organization.
When I interviewed him for ESPN The Magazine in Summer, 2008, White told me he expected the state to reverse the ban, which was enacted in 1997 after a spate of bad publicity and a labeling of the sport as human cockfighting, within a year or so.
He was off by a bit.
A political logjam had to be broken first. This happened with the Assembly boss Shelly Silver being defenestrated and smashed by corruption charges. He will be sentenced in a few weeks after being arrested in Jan. 2015.
White theorized his opposition – and no one but he knows its basis – had to do with union opposition to the Fertittas, melted with his ouster.
New players looked at the issue with a new set of eyes and they considered, and some reconsidered, lifting the ban, but for some formalities of procedure, MMA will be A-OK within the NY state borders. The news dropped Tuesday.
Many of the pols involved didn’t drape themselves in glory. Daniel O’Donnell, in the Assembly since 2003 and the first “out” male pol there, made a crack about two half-naked men attempting to dominate each other, with only the ending being different than one finds in a gay adult film scene.
We’re all adults here, so sometimes we resist freedom of even moronic speech, but why the injection of the porn reference? Was it the time and place, really?
Not to mention, that’s an insulting comparison to the athletes who are, for sure, not engaged in a carnal act while competing. Yeah, if you want to travel further down this road, you can note the lack of appropriateness in his choice to objectify the practitioners…but most will just chalk this up to Mr. O’Donnell coming off as a horned-up buffoon.
Where and when we see events unfold is to be determined. Gov. Andrew Cuomo will, unless hell sees a surprise cold snap, sign the bill, welcoming the sport to the state and then there is a subsequent 120-day waiting period. The organization has committed to four NY events over the first three full years, post-ratification.
The commission, which oversees boxing in New York State, will need to hustle to get up to speed on the sport and the ins and outs of overseeing and regulating it. I asked the commission for a comment and a spokesman referred me to the office of the Governor.
It’s basically a given that demand to attend live events will be formidable. Lorenzo Fertitta took part in a Tuesday press call to offer reaction and he said NY is the No. 1 state in UFC pay-per-view performance. A kickoff event at Madison Square Garden has been the assumed building platform, if and when UFC got the red carpet treatment. Fertitta was asked if that was the plan.
“Our first major event where we expect to be at is Madison Square Garden,” he said. “We anticipate that the first major event will be at Madison Square Garden. We haven’t signed any contract. We don’t have any exact dates held. We are talking to them about some potential weekends but, once again, it’s kind of hard to do until we know exactly as far as signing a contract and putting up non-refundable deposits, until we know exactly when we can do that and it’s going to be difficult to actually do that.” Two events in the remainder of 2016 in NY, one in the city and one outside, are a good bet.

Politicians had been central to this state being the only one in the union to forbid what used to be called “Extreme Fighting.” The issue got big media play in 1995 into 1996 and things simmered down enough so then-Governor George Pataki gave a thumbs up to allow it. Then opposition boiled up and a 1997 promotion, run by the old owners of UFC, was scrapped.

This “no holds barred” fighting is a sign of impending apocalypse, said tsk-tskers, even though, actually, holds were and are barred. Stomping of testes and biting and the like were massive no-nos but the momentum for a ban erupted and won out. That status quo got attacked with patience and lobbying and sometimes unfiltered arguments from White; he had difficulty hiding his loathing of Silver oftentimes. Year in and year out, the ban repeal was debated, achieved some political push toward repeal…only to see it stall out. No Silver, new ending.
Boxing promoter Lou DiBella told me he is cool with the ban being lifted and wishes the players in the sphere well. “I wasn’t a fan but I came around to being able to appreciate the science of it and especially, within the last six months, I’ve seen more and enjoyed some of the match-ups and action and spectacle and I even found myself Tweeting about it,” he said. “Once I learned more, my opinion evolved. Congratulations to Dana White and UFC!”
THE RING owner Oscar De La Hoya has long been an admirer of White. His managerial and promotional methods and the two intersected when Ronda Rousey spoke of contemplating a crossover stint in pugilism in the fall. We could see there being at least discussion of more boxing/MMA blending, with UFC being an open free market in NY.
I look forward to the events being brought to the media capital of the planet. I too found myself getting immersed into some of those same match-ups and spectacles in the last six months and as a fight fan, I too appreciate the skills and science and action MMAers put forth. Also, UFC puts on a tight show and has a more vibrant energy, geared to the 18-34 demographic, which boxing bosses – some of them – could use some help attracting. This rising tide could lift multiple ships.
Michael Woods once successfully fought a guy for the last cronut at Dun-Well. You think an MMA ban stopped Woodsy from getting his sugar fix that particular morning? Hell-to-the-freaking-no!!