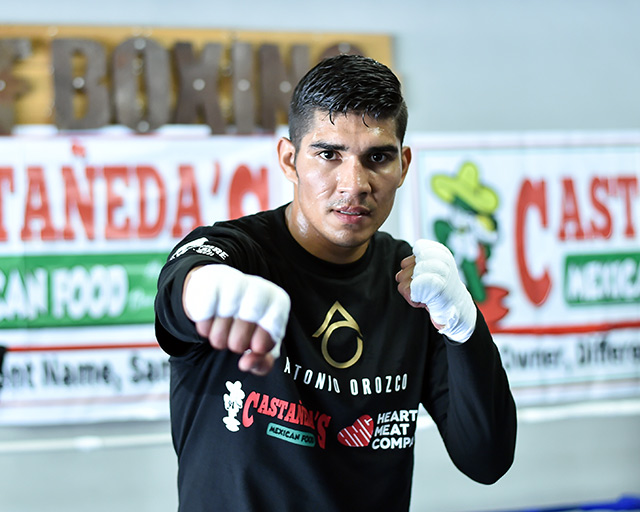 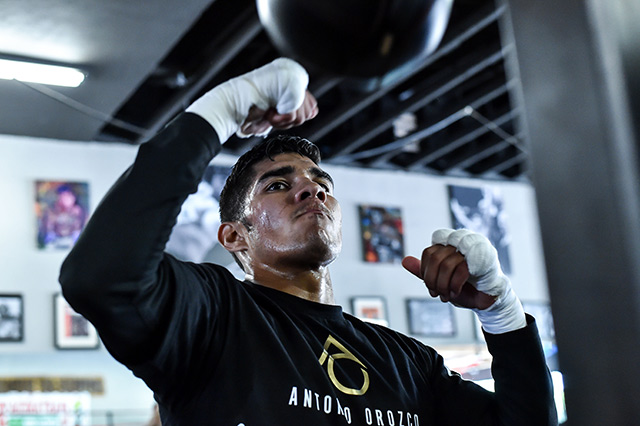 SAN DIEGO – In his first fight of 2016, Antonio Orozco headlines a card that will be televised on Estrella TV this Friday and the young junior welterweight contender hopes his main event against Miguel Acosta will be the onset of a world title shot by year’s end.

Orozco spoke with RingTV.com in the days leading up to his 24th professional bout at his home gym, the House of Boxing.

Settled in the midst of a middle-class neighborhood, the amicable disposition of Orozco reflects the same vibe his home gym portrays.

“It’s laid back here,” Orozco said when asked if they’re always playing the same kind of ’80s funk music on the stereo. For this interview, the soundtrack was Cameo’s 1987 hit “Back and Forth,” coincidentally the same year the 28 year old was born. He’s been well-traveled and cultured since that October day in Torrance, California. The early part of his childhood was spent in Tecate, Mexico up until the fifth grade, before moving to Garden City, Kansas to live out his high-school years. Now, he leans on the ring he trains in, and details what he’s learned and what he hopes to do.

Coming off what he calls his biggest win so far, Orozco (23-0, 15 knockouts) is assured every fight he’s been put through the past couple years has helped his progress.

“Oh, man, where to begin?” Orozco said when asked what lessons he learned after outpointing Soto last October. “Throughout the beginning of the fight we were trying to work some things that just didn’t work. Being aggressive was obviously not the way to go during that particular fight.”

Adding to the importance of that bout, Orozco was able to edge Soto in a unanimous decision in what was his HBO debut, but what the wide scores in his favor didn’t reveal, were the small obstacles he had to overcome against the veteran Mexican opponent.

“I believe Soto changed his style to be a more defensive counter-puncher, and he was really focused on drawing me in,” Orozco opined. “There were a couple moments where he did – connected with some good shots. That’s when we did the adjustment – trying to box him on the outside. That’s particularly one of the most important things we learned after that fight. You can’t underestimate anybody regardless of where they’re at.”

The adjustments Orozco made in that fight often go overlooked when evaluating a fighter’s character, however, there was one moment two years ago that was impossible to neglect.

“That left hook came from the knees, and it just buckled me. I felt it all the way in my heels,” Orozco reflected about his fight with Miguel Angel Huerta four fights ago. It happened in the final minute of the opening round, and what transpired in the heat of that dire moment, revealed the kind of fighter Orozco is. After gathering his senses on his feet, Orozco proceeded to finish the round fighting back in the round’s final seconds rather than going into survival mode. When asked what goes through one’s mind in a situation like that, Orozco responded: 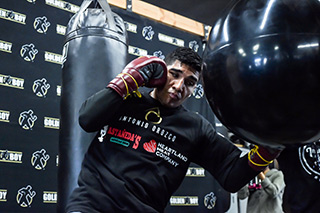 “There’s a saying in boxing – ‘A hurt fighter is a dangerous fighter’ – of course when you’re hurt, you want to hold, it’s what you’re taught, but sometimes you gotta go based off of instinct. Was I 100 percent there? No. But I had to let him know that I’m still responsive. In that second round he was coming in for the finish, and I have to stand my ground in situations like that.”

Orozco went on to return the favor with a left hook of his own in the second, and delivered a highlight reel knockdown of Huerta when it landed. Huerta belly-flopped hard on the canvas, and Orozco could be seen staring down his foe and strutting gleefully to the neutral corner.

“It’s exchanges like those that build a fighter and build the character of a fighter. He still got up, and he still fought. You gotta give him respect for that,” Orozco said.

It didn’t take long for Antonio to convince the referee to step in soon thereafter, but the importance of that fight resonated by saying, “That Huerta fight let people know, my trainers, my team, about me, and let myself know about myself.”

That was Orozco’s last win by knockout, and it took place at the Fantasy Springs Casino Resort in Indio, California, where he will take on Acosta on Friday.

Acosta (29-8-2, 23 KOs) is far removed from being the nameless Venezuelan who upset Urbano Antillon in Mexico to win a world title in the lightweight division.

“That’s the Acosta we’re expecting,” Orozco said about his next opponent, who he describes as a “Smart fighter, former world champion, and he’s definitely had his moments in boxing. Some people are writing him off, but that’s what they were saying about Soto and it was a very competitive fight.”

With his opponent’s situation considered, Orozco may find himself in front of a desperate power puncher. “Yeah, that’s the dangerous part about this particular fight,” Orozco said. “Fighters, they always want to come back and make that bounce, and prove not only to the people in attendance, but to everyone out there that they still have it.”

The ninth-round stoppage of Antillon happened close to seven years ago for Acosta, and the 37 year old has had trouble getting back into the ring recently, making only four appearances since October 2011. While Acosta came up short on the cards in all four of those fights, they have been relatively close scraps against decent competition – Richar Abril, Art Hovhannisyan, Miguel Angel Hernandez, and most recently, Michael Perez. What ultimately ended Acosta’s short-lived, yet unexpected title run, was perhaps his most memorable bout to those in the United States. He brawled with Brandon Rios in the second defense of his belt in 2011, but was ultimately knocked out with a definitive overhand right in the 10th round. It’s the fight that ultimately put Rios on the map, and was also the last time Acosta was stopped.

“You gotta be open-minded. Things happen for a reason. Thus far I’ve been blessed, and you can always expect anything right?” Orozco answered when abruptly asked the question of whether or not he believes in coincidences. In the mind of those who do, perhaps they’d expect Orozco to handle Acosta in the same fashion Rios did. Orozco laughed at the notion, knowing Rios has a similar story of being a transplanted Mexican-American kid from Garden City, now fighting out of Southern California. While it’s a bit apprehensive or superstitious to believe such happy accidents are prophetic, the fact remains that as of late, Orozco hasn’t been able to produce the knockouts that came aplenty early in his career.

“You have to take into consideration the level of opponents I’m facing now,” Orozco said. “These guys are experienced fighters, know what they’re looking for and know how to counter-punch.”

One may think he misses delivering a show stopper, but Orozco replied to that assumption, “No, because we’re not necessarily looking for a knockout. I believe a win is a win, regardless. People want knockouts, I even like them, who doesn’t like a knockout? But I think we have to keep ourselves composed to what we’re doing, and not get too carried away.”

Since being signed to Golden Boy Promotions in 2011, Orozco’s growth has been a patient, steady climb. He explained, “With these type of fights that I’ve been having the past couple years, Soto, Emmanuel Taylor – heck of a fight – Steve Forbes, Martin Honorio, Huerta, I think my manager, Frank Espinoza and Golden Boy, are building me the proper way. Giving me the experience I need. We’ll go back to the knockouts, (but) if you’re knocking everybody out, you’re not getting the experience of the later rounds. If a title shot comes within this year, we will take advantage of it, but first, we have to focus on Acosta. Regardless, he’s our assignment and we have to pass.”

Should he be successful in acing the Acosta test, Orozco can conceivably find himself in an elimination bout next, and even a world title shot by year’s end if all goes well. Rated No. 8 in THE RING magazine’s junior welterweight rankings, Orozco’s ascent also reflects on the four major sanctioning body’s pecking order: (No. 5 in the WBC), (No. 4 in the IBF), (No. 15 in the WBA), (No. 8 in the WBO). Since turning pro in 2008, Orozco’s career so far can be best described as patient and steady. Kind of like his composed personality outside the ring, but that’s just another coincidence.

The undercard to the Orozco-Acosta fight, which features middleweight prospect Jason Quigley and other standouts from Golden Boy’s stable, will be streamed live on RingTVLive.com.