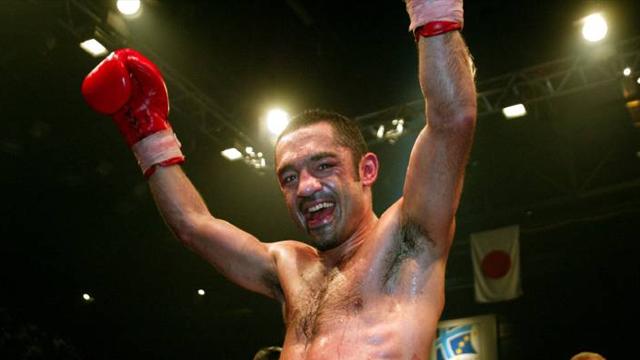 19
Mar
by Coyote Duran
March 19 marked the 10th anniversary of THE RING Magazine’s 2006 Fight of the Year between Mahyar Monshipour and Somsak Sithchatchawal.
The two engaged in a frenetic back-and-forth battle; ultimately the Frenchman succumbed, losing his WBA junior featherweight crown, getting stopped in the 10th round.

“That night I had to lose because it was time to stop boxing,” Monshipour told RingTV.com in broken English. “That night it helped me to become a man. I found my wife; I become a fatherÔÇªIt was destiny and so, this night, Somsak wouldn’t go down. He was indestructible.

“That night was our boxing event. It was his day; on that day, he can’t lose.”

The Tehran-born fighter moved from the war-torn Iran to France when he was 11 years old. He took up boxing and fought in 42 amateur bouts. He made his pro debut in the fall of 1996.

Monshipour won his first six before tasting defeat for the first time, he went 19-2-2, winning the National title before stepping up to win the vacant European crown in the summer of 2002. Two successful defenses set him up a showdown with his countryman Salim Medjkoune for the WBA 122-pound belt.

Both men put their friendship aside for the evening, going toe-to-toe. Midway through the final round, the relentless Monshipour dropped Medjkoune heavily to win the title.

Looking back, “Little Tyson” says that was his best performance.

“Everyone thought I’d lose and I knew I’d win,” said Monshipour who turns 41 the end of the month, “because I helped him to prepare for seven fights and I knew him like my own shadow.”

Monshipour made five successful defenses, beating Jairo Tagliaferro, Medjkoune in a rematch and Julio Zarate before losing to Somsak in 2003.

He initially retired after losing to Somsak, but two-and-a-half years into retirement, Monshipour returned at bantamweight, three comeback wins set him up for a WBA title fight with Anselmo Moreno. Monshipour gave his all, losing a split decision. He retired for good with a record of 34-4-2 (21 knockouts).

Monshipour considers the Panamanian to be the best fighter whom with he shared a ring.

“You can’t box him; you can’t be great or spectacular against him,” he said. “He knows and practices boxing since his childhood: he lives boxing. He fought so many world championship fights. He’s a great.”

Moreno was equally complimentary of Monshipour and remembers their meeting fondly.

“I fought Monshipour in France it was a great experience,” Moreno said through his wife, Rouss De Moreno. “It was the final fight of his career. He was a great fighter. I remember Monshipour was champion at 122 pounds and he really wanted to fight with me so he came down to 118-pounds to make the fight. Good fighter.”

Although he is generally happy with his achievements, Monshipour wished he had a unification with one of his contemporaries: “Oscar Larios because a fight between a Mexican and an Iranian boxer would be great in LA.”

Last November, he was reminded of his former life with the atrocity that took place in Paris.

“We have a great trouble with young people who are really ‘lost’ in our society,” he explained. “They come from around the world and don’t integrate, sociably, culturally and humanly.

“I left my country – Iran – to have a quiet life. They are now here. I’m afraid of my daughter’s future life.”

Now that he is retired, Monshipour works for the sports ministry in France, training every day with the young up-and-comers. He also works for TV for L’Equipe 21. He is married and has a daughter.