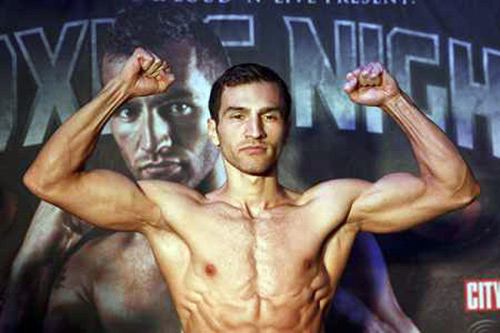 17
Mar
by Doug Fischer
Edis Tatli makes the first defense of his European lightweight title against Massimiliano Ballisai on Friday at the 8,500-seat Espoo Metro Arena in Espoo, Finland (about 10 miles from the capital Helsinki).

Tatli (26-1, 9 knockouts) is very respectful of his 31-year-old Italian opponent, who is a former National champion.

“He is [an] experienced fighter but I see some mistakes in his way of fighting which I’m going to take advantage of,” Tatli told RingTV.com through translator Pasi Taavitsainen. “He is quite tall which is good for him but on the other hand I think that I’m little bit faster than him so he’ll be in trouble with my strength and speed. I might score a knockout.”

Originally, Tatli was scheduled to face former perennial world title challenger Kevin Mitchell until the Englishman retired from the sport in mid-February.

“I was very much anticipating that fight to happen,” said the 28 year old. “I wish Kevin Mitchell best of luck in his future life, outside of boxing.

“You have to be 100 percent in this sport, if you have some motivational or health problems, you shouldn’t be stepping in to the ring.”

The Kosovo-born Tatli – now a Finnish national having lived their since age four – is hopeful that victory over Ballisai will further his world title aspirations.

In 2014 he attempted to be the first male from Finland to win a world title, dropping a points decision to then-WBA 135-pound beltholder Richar Abril.

One of the top promoters in Scandinavia Pekka M├ñki has been instrumental in Tatli’s emergence on the European scene.

“Tatli has already fought from the WBA world title against Richar Abril in Helsinki back in, September, 2014,” explained Maeki. “On that occasion he didn’t manage to pull if off, but the potential is there.

“I have strong belief in Tatli as a fighter and I’m sure he will fight for a world title in a near future. I’m sure Tatli would love to fight against any world champion out there, [IBF, Anthony] Crolla, [WBO, Terry] Flanagan, [WBC, Jorge] Linares, [IBF, Rances] Barthelemy.”

Tatli hopes to join compatriot Eva Wahlstr├Âm as a world champion. She is the reigning WBC Female junior lightweight titlist.

Currently, Tatli is ranked by the WBC (No. 13) and IBF (No. 11).
Questions and/or comments can be sent to Anson at [email protected] and you can follow him at www.twitter.com/AnsonWainwright