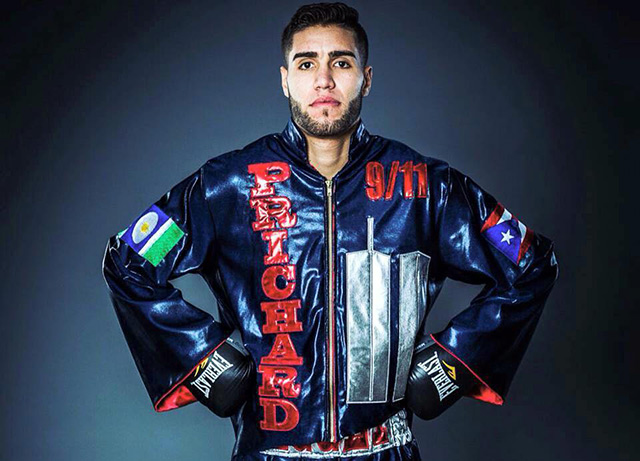 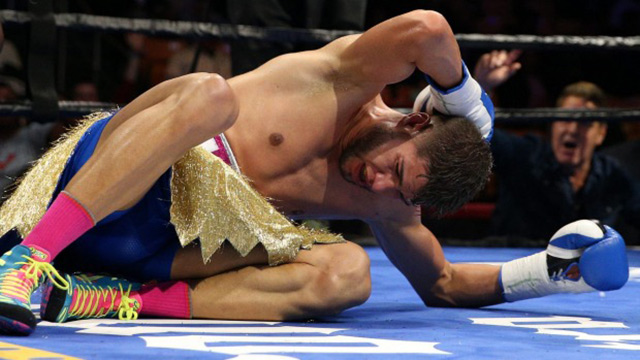 A spokesperson for the Virginia Department of Professional and Occupational Regulation acknowledged on Thursday that findings from a long-awaited investigation into the circumstances surrounding Prichard Colon’s traumatic head injury were compromised because of a special relationship involving the referee and ringside doctor.

“I understand how this could look like a whole lot of nothing,” spokesperson Mary Broz Vaughan said of the Department’s 10-page report.

The Department started an investigation soon after a foul-plagued Oct. 17 fight between Colon, a welterweight prospect from Puerto Rico, and Terrel Williams in Fairfax, Virginia. Following the bout, Colon, 23, lost consciousness in the dressing room after he was disqualified in the ninth round and soon lapsed into a coma.

The report suggested that referee Joseph Cooper seemed to lose control of the fight in the early stages and didn’t call enough fouls, such as Williams hitting Colon in the back of the head. The report ultimately absolved Cooper of any wrongdoing.

Similarly, ringside doctor Richard Ashby was given a pass even though the report stated he allowed Colon to continue after the boxer admitted to him during a break in the seventh round that he was dizzy. Despite the report’s findings, it ultimately decided that no one bore responsibility for Colon’s injuries.

But there is a subtler reason why a referee or a ringside physician may avoid blame in the report: The unusual relationship they have with the Department that insulates them from punishment or from being held accountable.

The referee and ringside physicians for the Oct. 17 match were private vendors contracted with the Department of Professional and Occupational Regulation, which, in the absence of a commission, sanctions boxing events in the state. As a result, they were exempt from any threat of punishment by the Department and could not be held “accountable” by the Department for what took place in the fight, Vaughan said.

Vaughan explained that because of Cooper’s and Ashby’s special status as contract vendors, Deputy Director Nick Christner, who authored the report, didn’t have the authority to hold them “accountable” in his findings. The Department didn’t have the power to suspend or fine or even to recommend punishment against them, according to Vaughan, who was the only person authorized to speak at the Department for this story. The report touches on this relationship briefly but never indicates how it might have influenced the investigation’s findings.

The Department’s options as it pertains to vendors is limited to terminating or not renewing their contract for a future show, Vaughan said. The Department only has authority to discipline a licensee.

“Our reach doesn’t extend there,” Vaughan said of punishing the referee or ringside physicians. “There’s nothing to suspend. There’s no license to suspend. The Department doesn’t have any jurisdiction over them and so they could not be held accountable for any regulatory violations,” she went on. “It is absolutely accurate that jurisdictional authority would not have extended to that level of accountability.”

Vaughan admitted the department was pressured into conducting some sort of inquiry in part by a public hungry for answers. The investigation was seen as initially a serious examination by publications such as The Washington Post and Los Angeles Times (and RingTV.com), who reported the Department’s findings on Wednesday.

The bout was on the televised undercard of a “PBC on NBC” broadcast at EagleBank Arena, and early on the match was plagued with fouls. In the first round, Colon could be seen motioning to Cooper that he was getting hit with rabbit punches.

In the third round, Williams appeared to cuff Colon with a left hand behind the head, causing Colon to drop to the canvas. The referee ruled it a slip. In the fifth, two points were deducted from Colon for hitting Williams low.

In the seventh, Colon fell to the canvas again after he absorbed a right hand to the back of his head. Colon rolled around on the canvas in apparent agony, holding his head with both hands. The referee could be heard, saying, “Come on, get up,” while also telling Colon he had a few minutes to recover. An off-balance Colon rose and stumbled to a neutral corner. He was examined by Ashby, who ruled he could continue even though Colon was holding the back of his head with his right hand the entire time.

Williams had a point deducted as a result of the foul. Colon, still cradling his head with his arms, was in apparent pain as the bout was allowed to continue with 29 seconds left in the round. The department report noted that, according to NBC announcer Kenny Rice, “Colon told Ashby that he felt dizzy and was hurting in the back of his head but felt he could go on and Ashby concurred and was waiting for Colon to shake it off and resume action.”

The report noted that Colon was allowed to continue because he didn’t have impaired vision, severe lacerations, any apparent broken bones or any other clear physical injury. “Colon was coherent, responsive, and able to stand on his own after taking some additional rest time,” the report said. “Colon continued the round and fought another two (2) rounds without requesting or requiring any further medical attention.”

There was plenty of criticism for the way Cooper handled the bout. According to the report’s findings, Virginia Boxing Program executive director Dave Holland faulted Cooper for not acting more aggressively to break up the boxers when they were in close. “Holland suggested doing so would have kept the boxers more in check and could have changed the overall tone of the contest,” the report said. Cooper was also chided for not calling a foul until the fifth round when rough-housing took place before that.

“If Cooper had called a foul in the earlier rounds, it is possible that the tension between the fighters might not have escalated, thus resulting in Colon’s low blow in Round 5,” the report noted. “Colon seemed to be frustrated with Williams throwing punches at his head/neck and Cooper not calling fouls.”

In defending his handling of the bout, Cooper said he didn’t feel some of the rabbit punches by Williams were harmful enough to warrant a foul. The referee also faulted Colon for lowering his head and exposing himself more openly to rabbit punches. “Cooper further explained that there were punches he felt glanced off Colon or didn’t land squarely and therefore did not constitute fouls,” the report said.

The report also called into question Cooper’s decision to deduct two points from Colon for a low blow in the fifth round when he took away only a single point for Williams’ hitting Colon in the back of the head in the seventh. Despite the concerns, the report found that Cooper was attentive to Colon’s health and safety and that he didn’t do anything to put Colon at risk to injury.

“Based on Cooper’s responsiveness to Colon’s concerns for being hit in the back of the head/neck, Cooper’s attention to Colon’s health after suffering injury, and Colon’s lack of exhibiting any serious harm or injury that impaired his ability to fight, Cooper did assure the health and well-being of Colon,” the report said.

Ashby, the ringside physician, also wasn’t faulted. He was determined to have properly examined Colon during and after the bout and noted that Colon was responsive to his instructions throughout. The bout was stopped before the 10th round when Colon’s corner, mistakenly thinking the fight was over, cut off Colon’s gloves, leading to Colon getting disqualified.

The investigation also found that Williams, his opponent, didn’t act improperly. “There is no formal complaint and there does not appear to be any grounds to initiate a disciplinary action,” the report said.

The report concluded that no one was to blame for Colon’s alarming condition. “While Colon’s medical condition following the contest against Williams is tragic, there is not one action so apparent and/or egregious to justify laying blame to any one person,” the report concluded. “The review identified no regulatory violations by any licensee under the Department’s jurisdiction. Nor does evidence clearly suggest any contract vendor failed to comply with statutes and regulations governing referee or ringside physician duties.”

Colon’s condition quickly deteriorated after the bout. According to the report, Colon was “in and out of consciousness and barely responsive” during the post-fight check by the physician. The doctor then ordered the EMT to take Colon to the hospital for a CT scan, where he had emergency surgery to relieve pressure on his skull.

The report noted that Colon’s camp did not respond to requests to be interviewed. Because they didn’t participate in the report, the investigation is still technically considered open, Vaughan said. Attempts to reach the 23-year-old Colon’s family were unsuccessful. Colon himself remains in a coma at a hospital in Atlanta. Vaughan predicted that Colon’s family was “likely to pursue civil action, one would assume, also against the state and not just the vendors.”

Vaughan said that Cooper, while he emerged mostly unscathed in the report, will likely never referee another show for the Department again. She also conceded that boxing wasn’t exactly a priority at the Department, an executive branch agency under the Secretary of Commerce and Trade that oversees 18 regulatory boards and programs, including the Boxing, Martial Arts, and Professional Wrestling Advisory Board.

“This (boxing) program has always just been sort of squeezed to fit into all the other things we do here,” Vaughan said. “And any opportunity to make it fit better, we’ll use that opportunity but it’s always hard to make it fit. Virginia’s regulator framework without a traditional athletic commission does present challenges. We’ve always readily acknowledged that. I don’t mean for that to sound like an excuse. It’s a statement of fact.”

Vaughan seemed ambivalent about the report. On one hand, she’s glad that some effort was made to look into the circumstances surrounding the fight. On the other hand, she acknowledged the investigation will have little bearing on ensuring that fighters are safer in the future.

“There’s no happy ending here,” she said. “This is an awful situation. I think everyone would like to have something we could point to and say, ‘This will not happen again because’- and I don’t know if any investigation with extensive reach would be able to do that. I certainly understand that ours does not have the ability to do that.”

Mitch Abramson is a former reporter for the NY Daily News. He can be reached by email at: [email protected] or on Twitter at @Mabramson13.