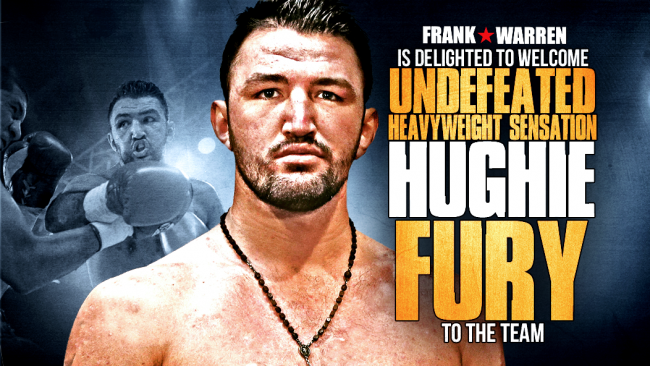 When unified heavyweight champion Tyson Fury said he was the product of a fighting family, he wasn’t lying.

Fury’s younger cousin, Hughie Fury, is an 18-0 (10 knockouts) rising heavyweight who just signed with promoter Frank Warren, it was announced on Thursday. Fury will look to make a splash under Warren’s banner on the undercard of WBO middleweight titlist Billy Joe Saunders’ defense against Max Bursak on April 30 at the Copper Box Arena in London, England on BoxNation.

First, however, the 21-year-old Fury has a fight lined up against journeyman Nagy Aguilera (20-9, 14 KOs) on March 26 at Wembley Arena. “I am going to make a big impact over the next few years and join my cousin Tyson at the very top of the sport,” Manchester’s Fury said in a press release. “Thank you BoxNation and look forward to the 30th April and future fights.”

According to the release, the 6-foot-6 Fury, who is trained by his father Peter Fury, is targeting his fellow countrymen like David Haye and Anthony Joshua, who is vying for the IBF title against Charles Martin on April 9 at O2 Arena in London.

“Hughie is one of the best and most exciting young heavyweight prospects in the world and I’m thrilled to sign him,” Warren said. “He wants to fight regularly and for a heavyweight talent of his potential that’s essential as he closes in on a world title. The division is certainly opening up with plenty of opportunities and Hughie is going to figure dominantly in the next few years.”