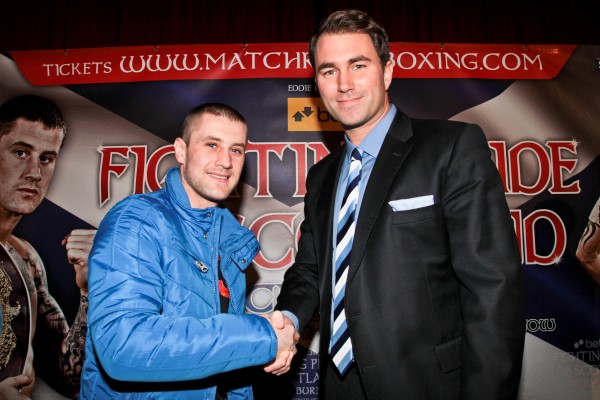 Former two-weight world titleholder Ricky Burns will face Italy’s Michele Di Rocco in a 12-round junior welterweight bout on May 28 in Glasgow, Scotland.

Burns, who held WBO titles at 130 and 135 pounds, has already cameoed twice at junior welterweight, outpointing Alexander Lepelley before putting forth a spirited display against Omar Figueroa Jr in a decision loss last May.

“It’s been a frustrating few years but I showed against Figueroa last summer that I can still mix it with the very best at world level,” said Burns in a press release issued by Matchroom Boxing. “Di Rocco is a tough guy and he will bring the best out of me. It’s a fight I’m so confident I will win and I’ll give my fans a great show.

“There are massive fights for me at lightweight and junior welterweight. I’ve spoken to my trainer Tony Sims and we feel I can compete competitively at either weight class and this fight will lead on to great things for me.”

Promoter Eddie Hearn said, “It will be the first night of boxing ever at the magnificent SSE Hydro (arena) and I know the fans will raise the roof. Di Rocco is unbeaten for nearly nine years.”

Editor’s Note: Burns versus Di Rocco will be contested for a WBA version of the junior welterweight title which is unrecognized by THE RING