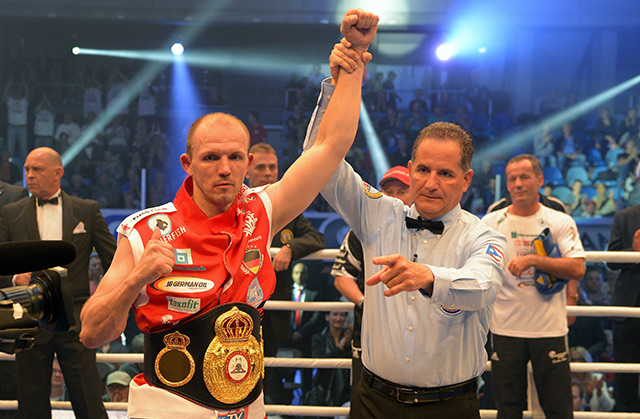 Unless you were the world’s biggest Juergen Braehmer fan there wasn’t a lot to get excited about in Neubrandenburg, Germany, on Saturday, when the veteran light heavyweight scored a unanimous decision victory over countryman Eduard Gutknecht in a rematch.

Braehmer, rated No. 4 by THE RING at 175 pounds, scored effectively enough out of his southpaw stance to keep Gutknecht honest in what was essentially a less competitive replay of their February 2013 encounter which ended in the same result.

Gutknecht did manage to land some eye-catching punches here and there but Braehmer utilized his considerable experience and ring savvy to slow the pace whenever the moment moved him. The right jab, the hook, the straight left hand, all staples of Braehmer’s arsenal, were sharp enough to get the job done.

The 37-year-old Braehmer was cut around the left eye by a head clash in the ninth but the injury was never a major threat. Gutknecht gave his all in the championship rounds but, for the most part, was still second best.

Despite a satisfactory performance, Juergen Braehmer is losing serious ground in terms of career momentum. He resides in a talent-laden division with significant tests all around him but his recent opposition has left a lot to be desired.

It would be nice to see the talented lefty in a career-defining encounter soon because time is not on his side.

Editor’s Note: Braehmer was defending a version of the WBA light heavyweight title which is unrecognized by THE RING.