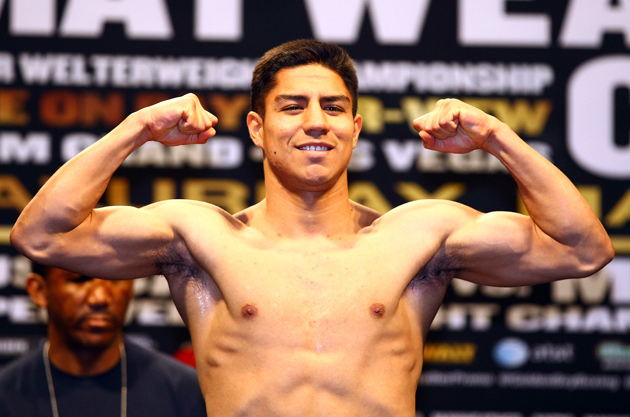 Jessie Vargas made a strong welterweight division stronger on Saturday night, when he scored a sensational ninth-round knockout of Sadam Ali.

Vargas enters the RING’s 147-pound Top 10 at No. 9 – not higher – because of the depth in the division. However, things could change soon with several 147-pounders in action in the coming weeks.

No. 1 Kell Brook takes on Kevin Bizier on March 26. No. 2 Manny Pacquiao faces No. 4 Tim Bradley on April 9. No. 8 Errol Spence fights formerly rated Chris Algieri on April 16. No. 10 Dmitry Mikhaylenko has a fight set against TBA for April 29. And No. 3 Amir Khan challenges middleweight champion Canelo Alvarez on May 7.

Once again, stay tuned. A lot could change.

Ali (No. 8 last week) exited the ratings as a result of his setback.

Shinsuke Yamanaka (No. 9 last week) survived two knockdowns in the third round to put Liborio Solis (No. 10 bantamweight last week) down twice and win a one-sided unanimous decision on Friday. That followed a split-decision victory over Anselmo Moreno.

Thus, Yamanaka swaps places with Tim Bradley (No. 10 last week). The bantamweight titleholder will be in danger of dropping out of the Top 10 with another so-so performance.

Lucas Browne enters at No. 10 after scoring a surprise 10th-round knockout of Ruslan Chagaev on Saturday in Russia. Chagaev (No. 8 last week) drops out.

In light of his victory at 147 pounds, Vargas (No. 6 last week) drops out of the 140-pound ratings. Adrian Granados, coming off a KO victory over Amir Imam, enters at No. 10.

Solis drops out after his loss to Yamanaka. He is replaced at No. 10 by unbeaten Ryo Matsumoto.

Ganigan Lopez (unrated last week) enters at No. 8 after his majority-decision victory over Yu Kimura (No. 3 last week) on Friday. Kimura drops to No. 9 and Moises Fuentes (No. 10 last week) drops out.