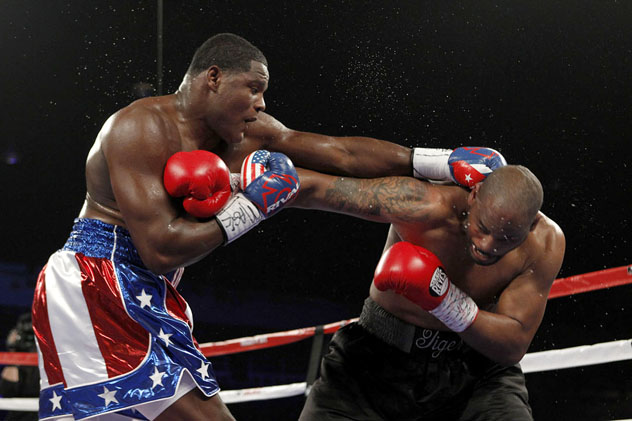 Washington, D.C. — As predicted, Luis Ortiz made Tony Thompson look his age (44), eat his words (there were many) and inch closer to a likely retirement. In a bout that at times resembled a morbid exhibition, Ortiz out-classed Thompson, who received the fight on a month’s notice and fought with a smile on his face for the better part of five rounds on Saturday at the DC Armory until he couldn’t smile anymore.

The end came at 2:29 of the sixth when Ortiz clipped Thompson’s right ear, causing the 6-foot-5 Thompson to topple to the canvas, the third time Thompson had been knocked down. Ortiz, who is nicknamed “The Real King Kong,” climbed the ropes and beat his chest after Thompson was counted out before an announced crowd of 4,585. In an example of possible hometown judging, Lloyd Scaife actually gave Thompson two of the five rounds. But everyone else saw complete domination by Ortiz.

“Remember he’s a fighter with a lot of experience,” the 36-year-old Ortiz said in the ring afterward of why the fight lasted six rounds. “My corner told me to be patient and just to take my time. You still haven’t seen the best of King Kong. I’m ready for anyone.”

When Ortiz was asked if he was in a hurry to participate in more meaningful fights because of his age, he demurred. “Bernard Hopkins fought until he’s 50 so age doesn’t really matter,” Ortiz said. “Whoever wants it — WBO, WBA and look at the ring, it’s full of blood but it’s not my blood.”

Though Ortiz is the WBA interim heavyweight titleholder, one of three champions designated by the WBA as a champion, an absurd reality, the WBA has its standards and refused to put the title on the line Saturday because Thompson wasn’t regarded as a credible enough opponent.

“I knew I had to take what I could until I get the championship,” Ortiz said. “I’m ready for the next fight now, if one of them wants to jump into the ring now I can do 15 more rounds. I’m a serious guy, boxing is my job, my passion I’m committed 100 percent I won’t go to the gym on Monday because my manager and my trainer won’t let me. But if it was up to me I would go in. I work, I train, I spend time with my family. That’s all I do. I look to destroy my opponent in the ring. I let my fists do the talking.”

The WBA hopes to clean up the mess it created by initiating a tournament that if it follows form, would pit Ortiz against Alexander Ustinov next. Golden Boy hopes to make that fight on the Canelo Alvarez-Amir Khan undercard on May 7, Eric Gomez, VP of Golden Boy said.

“We’re going to go back and talk to (Golden Boy CEO) Oscar (De La Hoya) to make sure (Ortiz) is OK,” Gomez said. “It all depends on Ustinov and his promoter Frank Warren and if they’re reasonable then we can get it done.

Ortiz (25-0, 22 knockouts) is in dire need of better opposition. It was a highlight reel of punches for Ortiz, who dropped Thompson (40-7, 27 KOs) with an overhand left midway through the first round. Thompson rose slowly but was clearly hurt. Ortiz leveled Thompson again to end the third, putting him down with another overhand left on the top of his head. The sight of the enormous Thompson crashing to the canvas caused the crowd in his hometown to scream in a panic. Thompson was having a good round before the knockdown, landing a few counters and causing Ortiz to slow his onslaught. But Thompson’s success was fleeting.

“I wanted him to teach me something,” Ortiz said. “How is it that he beat (Odlanier) Solis?” he said of Thompson’s two victories, an eighth-round stoppage and a split decision, against another Cuban boxer. “But he didn’t teach me much.”

Thompson took the assignment not even a month ago, admitting he wasn’t in the gym when he got the assignment, calling into question his level of fitness. To say that Thompson was relaxed in the days leading up to his bout is to undersell just how loose he was. Thompson spoke at Thursday’s press conference as if he was the guest at a roast, hurling one-liners and talking to the audience as if he was entertaining an old friend.

Thompson didn’t have the success in his recent fights to justify his easygoing demeanor. In his last fight in October, he lost to Malik Scott, his third loss in his last five fights. Thompson has faced the sturdier opposition in his career, losing twice to Wladimir Klitschko in 2008 and 2012, both by stoppage.

“He is strong, as advertised,” Thompson said. “It’s sad that my hometown got to see me at the end of my career versus at the peak of my career. I just think it would have been a much better fight with prime Tony Thompson, that’s all, but the guy is as strong as a monster. But again, three weeks of training and that’s the best I have for three weeks. Thanks to all the fans that came to support.”