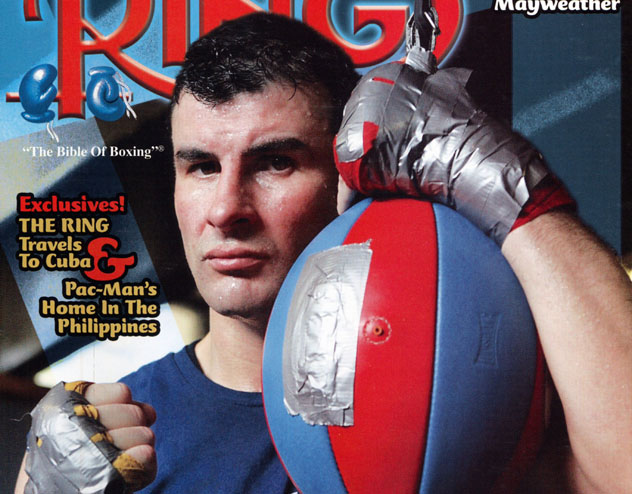 Welsh southpaw Joe Calzaghe was in his 13th year as a professional and his ninth as the WBO super middleweight titleholder when he signed on to face IBF counterpart Jeff Lacy in a massive unification showdown in Manchester, England, on March 4, 2006.

Despite remarkable longevity and championship experience, the jury was still out on the unbeaten Calzaghe. The lightning-quick left-hander had bolstered his unbeaten resume, if not his reputation, with 17 straight title defenses but elite status and elite purses had eluded him. He was now desperate to break free of the pack and face off against a big name nemesis.

Lacy was the new force at 168 pounds and an authentic knockout artist. When the Adonis-like Floridian challenged for the vacant IBF belt he was 16-0 (13 KOs) with seven stoppages coming inside one round. Known as “Left Hook”, he claimed the world title with an impressive eighth-round stoppage of Syd Vanderpool and made four quick defenses.

A trip to the U.K. did not faze Team Lacy one bit.

“I’d broken my left hand against Evans Ashira six months earlier and they thought I was ready to be taken,” recalled Calzaghe. “When Frank (Warren) approached Lacy’s team after I’d recovered they were actually happy to come to Manchester and that was very poor judgment. Actually, I must thank (promoter) Gary Shaw and Jeff Lacy for thinking I was over-the-hill back then.

“The reality is I was fired up and as fit as I’d ever been. My quickness, my timing, my punching; everything came together in camp because I knew my career was on the line.”

Training camp was going smooth and by the numbers until the tools of Calzaghe’s trade let him down once again. Two weeks out from fight night, the Welshman seriously injured his left wrist during sparring and his dream unification clash was placed in serious jeopardy.

Doctors insisted the hand required three weeks of rest and the fighter’s trademark confidence began to wane. Inspiration, however, was at hand from father and trainer Enzo, who felt that Lacy was made to order and that victory, in what was being touted as the biggest super middleweight clash since Roy Jones Jr. dethroned James Toney, over a decade earlier, was assured.

Calzaghe said, “My Dad predicted that I would win the fight easily. We knew Lacy was a big puncher but styles make fights. He was shorter and a bit one-dimensional, so we were 100 percent confident that I would come out on top by using speed and angles.

“People say now that Lacy was all hype but he was a former Olympian (Sydney 2000), unbeaten as a professional and a world champion. He met me at my best and I could have gone 15 rounds that night. I was just on another level.”

How Calzaghe felt during the fight was a far cry from how he felt only hours before it. To accommodate U.S. television audiences, who would be viewing live on Showtime, the bout was scheduled to begin at 3:00 a.m. local time on Sunday. Calzaghe, a creature of habit, had a real problem.

“I woke up at 7:00 a.m. on the Saturday and couldn’t get back to sleep because of the adrenaline,” laughed Calzaghe. “The fight was scheduled to begin early the next morning and by 10:00 p.m. on the Saturday, I was absolutely knackered. I had a cold shower and didn’t feel any different and the fight was still five hours away.

“All of that changed when I got to the arena and sensed the atmosphere. When the lights are all around you and the cameras are on, it’s like a switch. I suddenly felt relaxed and I think people were actually worried because I was too relaxed. I was laughing, joking, listening to my music and I just remember feeling great.”

Both fighters looked confident before the opening bell but three minutes later their respective demeanors were vastly different. Calzaghe rubberstamped his dominance in the opening session and never looked back. One-1000, two-1000, five or six shots fired in that space of time before the Welshman either turned his man or fled the scene at an angle.

Lacy’s nose was bloodied at the end of the first and as the rounds and punishment progressed, Calzaghe opened up gory lacerations around his eyes. When the American wasn’t on the end of a quick two-fisted burst, a sharp southpaw jab, an under rated weapon that Calzaghe hadn’t utilized in years, speared him in the face.

“I didn’t give him time to think or to load up,” said Calzaghe of what can only be described as a punch-perfect game plan. “When you take half a dozen punches in an effort to land one that will get to you over time.

“I’ve never spoken to Lacy since the fight but I’ve got nothing but respect for the heart he showed that night. But what I will say is the referee, or his corner, should have pulled him out. That beating was far more damaging than any knockout and his confidence was never the same again.”

Calzaghe became the first man to floor the American in the final round and barring a point deduction for a minor infringement in the 11th, he would have claimed a flawless unanimous decision victory. The scores were 119-105 and 119-107 twice.

The ordeal ruined Lacy as a fighter. He entered the ring against Calzaghe with a perfect record of 21-0 (17 KOs) but over the past decade has gone 6-5 (1 KO). His most recent outing was a fourth-round stoppage defeat at the hands of Sullivan Barrera in January of last year and, at 37 years old, he was a shell of himself.

Calzaghe said, “I knew he would never be the same because he had too much heart. And also, a fighter like Lacy relies a lot on intimidation and when that’s gone, they’re in trouble. When Mike Tyson lost to Buster Douglas, he never got the same respect from top opponents because they suddenly believed they could win.

“It’s not like Lacy got caught with by a lucky punch. Any man would struggle to come back from a 12-round beating like that. Bernard Hopkins did something similar to Kelly Pavlik and Pavlik was never the same. It has lot to do with the mind and some fighters just can’t recover from being stripped of their confidence.”

In boxing, however, one man’s career altering downfall is another man’s glorious and triumphant success story. Calzaghe-Lacy was no different. This virtuoso performance marked a new beginning for “The Pride of Wales” who finally had the recognition and financial compensation he so desperately craved.

A second unification victory against then WBA and WBC titleholder, Mikkel Kessler, sealed his Hall of Fame credentials in November 2007.

“I would put the Kessler win above Lacy because he was a superior fighter,” acknowledged Calzaghe, who claimed a hard-fought unanimous decision over the fierce Dane. “To perform well at Millennium Stadium and win every belt was unforgettable. Although I never held them at the same time, I’m the only super middleweight to win every recognized title.

“Kessler would be number one and Lacy would be number two. Even though I beat Bernard Hopkins, the manner of victory against Lacy and what it meant for my career makes it very special. People are still inspired by that fight to this day and ask me about it on social media.”

High-profile victories over Hopkins and Roy Jones Jr. at light heavyweight concluded the career of arguably the finest British fighter of the post-World War II era. Calzaghe (46-0, 32 KOs) has been called out on several occasions since his official retirement in February 2009 but has never been lured back.

He was inducted into the Hall of Fame in 2014 alongside fellow boxing legends Oscar De La Hoya and Felix Trinidad.

“Money was never a motivator for me and it was all about legacy,” said Calzaghe. “After I beat Kessler and Hopkins, I told my family that I was finished with boxing. My hands were getting worse and worse and I’d done everything. I had two young kids to look after so it was an easy decision for me to make.

“I come from a little town in South Wales and I ended my career (against Jones Jr.) in Madison Square Garden. What a way to finish and I’ll always be proud of the fact that I retired on top.”