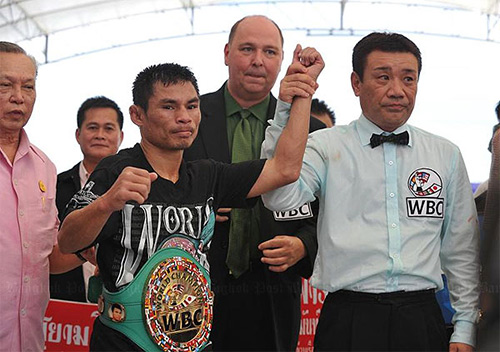 Wanheng Menayothin made the fourth successful defense of his WBC strawweight title, stopping Go Odaira in the fifth round at City Hall Ground in Nakhon Ratchasima, Thailand on Thursday. The time of stoppage was 2:00.

Menayothin (41-0, 16 knockouts) overwhelmed his Japanese challenger with consistent pressure, not allowing him to get warmed up after being out of the ring for nearly a year. Yet in the first round, Odaira controlled the pace with his awkward southpaw movement, which set up lead straight lefts.

Odaira’s success continued until the middle of round two, when a straight right hand knocked his head back and brought the Thai crowd out of their seats.

Menayothin scored a knockdown in round three as Odaira (12-5-3, 1 KO) caught a right hand to the jaw while attempting to exit off the ropes. Odaira, 31, barely survived the round, taking damage for the remainder of the stanza and wasn’t a threat again in the fight.

Odaira was reduced to desperate swings to keep Menayothin, 30, off of him in round four but Menayothin was able to push him to the ropes and land repeatedly with right hands.

The end finally came a round later when a right uppercut followed by a left uppercut had Odaira out on his feet, and a few follow-up rights sent him to the canvas, where referee Raymond Chang stopped the fight without a count.

The loss was Odaira’s second in major title fights. On New Year’s Eve 2014, he was stopped in seven rounds by countryman Katsunari Takayama in a bout for the vacant IBF and WBO 105-pound titles.

Menayothin is rated No. 2 at strawweight by THE RING, behind WBA titleholder Hekkie Budler of South Africa.