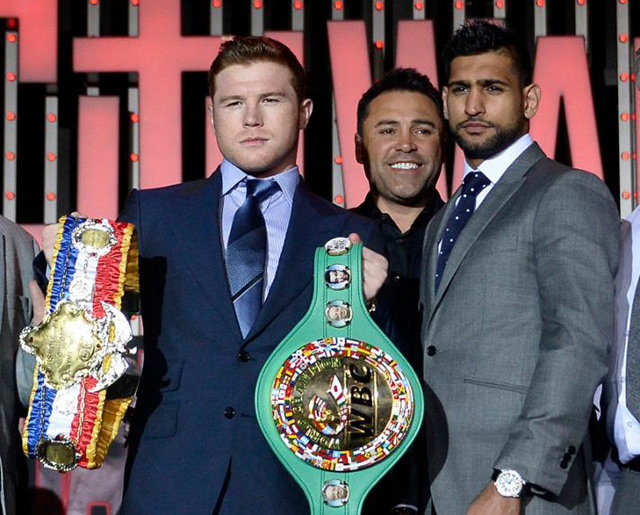 LOS ANGELES – The fight no one saw coming completed its final leg of a three-city international press tour on Wednesday, and the fans who crowded the Universal City Walk all had one thing in common: they too were surprised at the match-up between Saul “Canelo” Alvarez and Amir “King” Khan.

The news of the fight was broken on Groundhog’s Day, Feb. 2, and not even Punxsutawney Phil could see such an extraordinary showdown come to light. Curiosity got the best of this writer on what people thought of this fight, and some of those boxing fans spoke to RingTV.com before the press conference commenced.

“Not in my wildest dreams would I have thought Canelo would face Khan,” Matthew from Chino Hills, California, admitted. He laughingly continued, “I also never thought Khan would ever get the big fight he’s always been looking for.”

Alvarez (46-1-1, 32 knockouts), Jalisco, Mexico, will look to defend his WBC and RING middleweight titles against Khan at a catchweight of 155 pounds, and what makes this fight an exotic one, is that Khan (31-3, 19 KOs) will be drastically moving up in weight. A former unified title holder in the junior welterweight division, Khan, a current welterweight contender from Bolton, England, will skip the junior middleweight division altogether, and fight for a middleweight title after only three menial fights in the 147-pound division. The fight is the main event of an HBO PPV card, and will be the first sporting event held at the brand new T-Mobile Arena in Las Vegas.

“It doesn’t matter, we’ll be here no matter what,” said Miguel from Bakersfield, California, when asked if it even matters who Canelo fights. Wearing a Canelo shirt and hat, Miguel didn’t hide the fact he was a fan of the red-headed Mexican, but he conceded Alvarez’s advantages saying, “Amir Khan is a good boxer. The only issue is, he’s having to move up in weight.” Miguel showed up to the plaza just outside Universal Studios at 1:00 p.m. – five hours before Wednesday’s presser began – and also said he will be attending the fight in Las Vegas.

Luis, from the San Fernando Valley, also had a prime spot near the red carpet where the fighters would make their entrances. “I feel like Amir Khan is stepping up. I applaud him for taking the challenge,” he said, wearing the classic Mexican red headband that was made famous by Julio Cesar Chavez.

Finding a boxing fan rooting for Khan in this instance was like a needle in a haystack, but Javier from Wilmington, California, managed to find us. “He’s supposed to be fighting the top-ten contenders in his division if he claims he’s the middleweight champion,” Javier said about Alvarez. “That’s one of the downs for me. We all know Canelo’s gonna win, but I want the upset.”

His friend next to him, George from Ontario, California, didn’t seek the same result, but brought similarities of a fight in Canelo’s past by saying, “He has a big advantage, and I think it’s gonna happen the same way Josesito (Lopez) had to jump up, and you already saw the results of what happened there.”

To get a better perspective on what fans from the United Kingdom thought of the fight RingTV.com also spoke to Johnny Nelson, a former cruiserweight champion and current pundit for the British network Sky Sports. “This blew it up,” Nelson said when asked what the reaction was across the pond.

“Amir Khan managed to change public opinion of him in 24 hours. It was frustrating as a fan, as a Brit, because you knew how good Amir Khan has been. There was talk of Amir fighting Kell Brook (unbeaten IBF welterweight titleholder from Sheffield, England) and Amir said, ‘No, I want bigger fights.’ We didn’t believe that, so therefore he was in danger of tarnishing his reputation. Then out of the blue, he shot this fight out. Everyone went ‘WOW.’ They could not believe he took such big, dangerous, massive fight against a fighter who is probably one of the best fighters in the world. Khan changed public opinion in a heart beat.”

Khan has been trying to land a fight of this magnitude for years, and after being teased by Floyd Mayweather Jr. and denied by Manny Pacquiao one final time, the 29 year old steps up to the plate.

“The amount of support he’s got for this fight is second to none,” Nelson said of his countryman. “They understand it’s a dangerous fight, they understand it’s a dangerous fight, but Khan has proved that he’s got guts – cajones. He’s a warrior to take such a fight and step up in weight because what he’ll be doing is creating history – it’s a massive thing for a Brit to do in the States.”

What exactly is that history Nelson speaks of? “Sugar Ray Leonard did it against (Marvin) Hagler,” Nelson exemplified. “Oscar De La Hoya had the same situation against Pacquiao.”

Speaking of which, the press conference was kicked off by none other than the “Golden Boy” himself, Oscar De La Hoya, who is heading the promotion of this fight.

“It is not often that two super stars of a sport face-off at the peak of their careers. This is one such event. Canelo vs. Khan is truly a global happening, with the biggest fighters of Mexico facing the biggest fighter in England,” De La Hoya, president and founder of Golden Boy Promotions said in his opening statement about the fight. “An old saying tells us that styles make fights, and these fighters have styles to give us a tremendous match on May 7. Not only for die-hard boxing fans, but for the casual boxing fans alike. It’s a classic case of speed vs. power: Amir has tremendous boxing skill, lightning like hand speed, and great footwork, while Canelo features thunderous combinations, tremendous power and solid defense.”

The first fighter to speak at the podium was Khan of course, and while he opened with the thank yous to his team and the fight’s promotion, the boo birds were out in full force. “The reason I’m taking this fight is because I really believe I can win this fight, and if I didn’t believe I could win this fight, I wouldn’t be here,” Khan opined once he started talking about the upcoming match.

There was a feeling that Khan knew he could stir up this predominantly Mexican crowd, and he proceeded to do so with a smile on his face. “Canelo is a tough guy, he comes fighting forward, he’s strong, he has a huge Mexican fan base. This fight is huge all around the world, me being from the UK, I have a huge fan base there. Cinco de Mayo is May 7, but I’ll tell you one thing, you’re gonna see more British flags in Vegas than the Mexican flags. This is what makes boxing amazing.”

While Khan played his role nicely, Canelo kept his session at the mic short, yet sweet. “I’m not gonna speak that much, I just want to thank everybody,” Alvarez said to an overwhelming cheer while Eric Gomez, of Golden Boy Promotions, translated. “Whenever I’m here I’m treated very well. You guys motivate me to keep winning. Because of you I wake up, and I want to be triumphant. Not only for me, but for you guys. I’ll prepare like always: 100-percent. (Khan) is a difficult opponent. I’m ready for this, and much more. Thank you very much, and see you May 7.”

The stunning announcement of Canelo-Khan is still baffling to many, and that notion shows truth with the many scattered opinions of the match-up. However, the shock value of this fight coming to fruition wasn’t the only thing fans had in common. When Gennady “GGG” Golovkin, united WBA/IBF middleweight titleholder, was brought up as a potential opponent for Alvarez, the excitement for that prospected match superseded the one happening on May 7. Regardless, Canelo-Khan is happening, and it’s an event that has two stars from each hemisphere clashing before our very eyes. Because of that alone, May 7 will be a night that belongs to boxing.