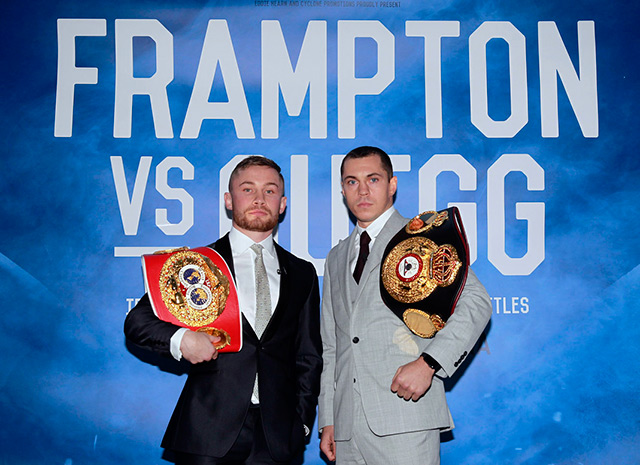 The biggest fight on Saturday was the junior featherweight Carl Frampton-Scott Quigg showdown in Manchester, England.

Quigg and Frampton entered the fight rated Nos. 2 and 3, respectively. After Frampton won by a split decision to unify two titles, those positions are reversed. Frampton now stands behind only No. 1 Guillermo Rigondeaux.

That should set up a Frampton-Rigondeaux matchup for the RING championship, particularly because the WBA has ordered it, but it isn’t likely to happen because Rigo is nearly impossible to beat. Frampton and his handlers have an eye on featherweight Leo Santa Cruz instead.

We hope we’re wrong; we hope Frampton decides to face the most significant challenge in his weight class. Stay tuned.

For the record, we considered dropping Quigg to No. 5, below WBO titleholder Nonnito Donaire. However, we decided to place Quigg at No. 3 because of his solid performance – with a broken jaw – and Donaire’s so-so opposition since he was stopped by Nicolas Walters.

Marco Huck (No. 4 last week) stays put after he stopped Ola Afolabi (No. 10 last week) in the 10th round Saturday. Huck couldn’t leapfrog No. 3 Krzysztof Glowacki, who stopped Huck in August.

Afolabi is out. Unbeaten Latvian Mairis Briedis enters at No. 10.

We can say the same thing about the future of Terence Crawford (No. 2 last week) that we said about Frampton’s.

Crawford, who stopped Hank Lundy on Saturday, would like to fight Manny Pacquiao if Pacquiao beats Tim Bradley but Pacman says it’s one more and done. Bob Arum, Crawford’s promoter, threw out the name Ruslan Provodnikov (No. 3 last week).

The name that SHOULD be at the top of their list is Viktor Postol, our No. 1 140-pounder. Postol-Crawford would be for the RING championship and clear supremacy in the division, which should be powerful incentives for Crawford.

Santa Cruz (No. 3 last week) stopped Kiko Martinez (unrated last week) in five rounds Saturday to retain his position. We didn’t feel a victory over an unrated fighter was quite enough to lift Santa Cruz above No. 2 Gary Russell Jr.