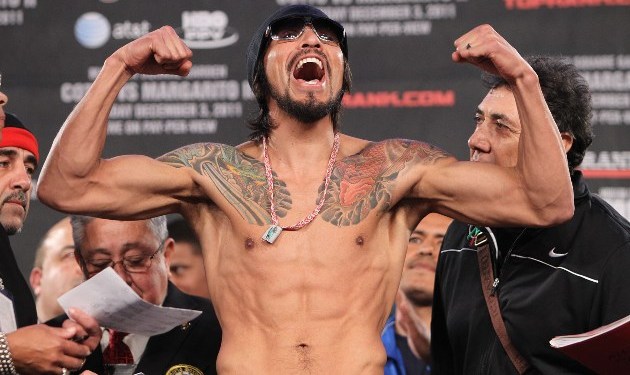 Antonio Margarito was the boogeyman of the welterweight division for much of the 2000s, during which he won three versions of the world title. He was known for his aggressive, all-action, fan-friendly style and granite chin.

After a brief amateur career he elected for monetary reasons to go pro in 1994, at just 15 years of age. After six years, on the undercard of the first Erik Morales-Marco Antonio Barrera fight, “The Tijuana Tornado” was matched with another up-and-coming fighter: future middleweight champion Sergio Martinez. The Mexican was too much for the less experienced Argentine, forcing a seventh-round TKO.

Margarito received his first title attempt when he challenged Daniel Santos, but the bout was curtailed in the first round due to an accidental headbutt. However, when his second opportunity came along in March 2002, he made good.

“My proudest moment has to be when I won my first world title,” Margarito told THE RING through co-manager Sergio Diaz Jr. “I fought and beat Antonio Diaz [by TKO 10] for the [WBO] welterweight world title.”

He made seven successful defenses against, among others, former WBA titlist Andrew Lewis (TKO 2) and a pair of future IBF titleholders in Kermit Cintron (TKO 5) and Joshua Clottey (UD 12).

In 2006 Top Rank tried to match Margarito with Floyd Mayweather Jr., whom it is believed was offered in the region of $8 million, but Mayweather turned it down.

Touted as “the most feared man in boxing” Margarito continued to seek out the best possible opponents and met Paul Williams in 2007. Both participants enjoyed their moments in the bout but the undefeated American got the nod by close unanimous decision.

Margarito rebounded to win the IBF title by beating Cintron for a second time, but his reign was brief; he vacated the title to face Miguel Cotto for the WBA crown in the summer of 2008.

Cotto – a pre-fight 2-to-1 favorite – used his boxing skills to carry the early rounds but Margarito continued to press in a fast-paced fight. As the night wore on, Cotto tried to use movement to pick off his hard-charging rival. However, Margarito wouldn’t be denied and like creeping death he kept coming. In the penultimate round, Cotto’s uncle threw in the towel.

Unsurprisingly, Margarito considers it his best victory: “It was a great fight, a great win. Big fights between Mexicans and Puerto Ricans have always been memorable.”

He took the rest of the year off but returned as a big favorite against Shane Mosley in early 2009. In the lead-up to the fight it was revealed that Mosley’s trainer, Naazim Richardson, had spotted something he believed to be illegal in Margarito’s hand wraps.

The fight took place despite the ensuing chaos. Mosley, then 37, rolled back the years and scored a dominant ninth-round TKO victory.

To this day Margarito maintains he never knew anything of what his trainer Javier Capetillo was doing to his gloves.

Margarito took time away from boxing and after almost 16 months he resurfaced at junior middleweight. A win set up a shot at the vacant WBC 154-pound title against superstar Manny Pacquiao at Cowboys Stadium in front of 40,000 fans. Pacquiao won a wide points decision that generated 1.15 million HBO PPV buys.

Margarito fought once more against bitter rival Cotto when the two met at Madison Square Garden in the fall of 2011, and this time Cotto gained a measure of revenge. The Puerto Rican won most of the rounds before the fight was stopped between the ninth and 10th rounds due to severe damage around Margarito’s eye – something which had also occurred in the Pacquiao fight. Margarito retired soon afterward.

There is one man Margarito wishes he could have faced in his career, and surprisingly it’s not Floyd Mayweather.

“That would have to be Oscar De La Hoya,” he lamented. “I used to be Oscar’s sparring partner. I really believed Oscar would fight me after the Cotto win, but it wasn’t meant to be.”

Nor was Margarito’s retirement. In the second half of 2015, Margarito (38-8, 27 knockouts) announced his intention of making a comeback.

“I woke up one morning and I told my wife I had the itch to return,” he said. “My wife told me she would support my decision 100 percent as long as the doctors gave me their blessing to fight again.

“I reached out to my management and spoke to them about returning. They also mentioned they would support my decision to return, as long as I was healthy and received medical clearance.

“We decided that I should train as if I had a fight to find out if my body would respond positively. After two months of training, we flew to the Moran Eye Center in Utah. Dr. Crandall gave me a thorough eye exam and medically cleared me to fight.”

On Saturday, Margarito will face Jorge Paez Jr. at junior middleweight in a contest scheduled for 10 rounds in Mexico City.

Today, Margarito, 37, is no longer married to Michelle, whose name was emblazoned on his shorts. He is re-married to Lorena Vidales and the couple has two young children, Antonella and Antonio Jr.

He kindly agreed to talk about the best opponents he has fought.

Paul Williams: Paul’s height and southpaw stance made it difficult for every fighter to figure him out, but his greatest weapon had to definitely be his jab.

Rodney Jones: I fought Rodney early in my career and lost. His defensive style made him successful early on in his career and difficult for me to figure out.

Joshua Clottey: Both Danny (Perez) and Joshua had granite chins. I remember landing big shots on both of them, but they just wouldn’t go away.

Manny Pacquiao: I tried countering and timing Manny but his hand speed made it difficult to do so.

Shane Mosley: Shane could definitely move. He never allowed himself to be cornered.

Miguel Cotto: No too many fighters go into a fight with a game plan and stick to it like Miguel.

Clottey: Although I did not think Joshua had a strong punch, he had a strong body. I remember landing heavy punches, but Joshua would not even flinch. Each time I punched him it felt like hitting a solid wall.

Pacquiao: I have to say Manny’s punch was big for a small fighter.

Cotto: Miguel was destined for success. With his amateur background, financial backing, and promotional support, Miguel had everything a fighter needs to make it easier for him to develop. You only grow as a fighter if your skills grow.

Mosley: Shane had it all – hand speed, footwork, punch, defense – and he could take a punch.