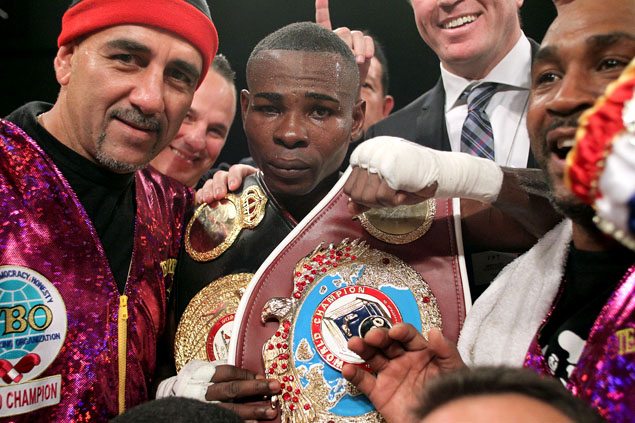 The hard-hitting Cuban was far from impressed and reiterated his desire to take on Frampton following his own bout against England’s James Dickens, who he takes on in Liverpool on March 12.

The two-time Olympic gold medalist ran a poll on Friday asking his followers if they thought the winner of Frampton versus Quigg would be “man enough” to fight him. Out of 1477 fight fans, 62 percent predicted that the winner would carry on avoiding Rigondeaux.

“El Chacal” once again branded his rivals as cowards, stating, “After I fight @JazzaDickens10 the loser of #FramptonQuigg should fight him and the winner should stop running and fight me.”

Rigondeaux, now 35 years old, is determined to regain his world titles and on the morning of Frampton-Quigg told followers, “I don’t care who wins 2nite. I only want for the winner to know I fight him anywhere anytime.”

He also took a swipe at the victor’s boxing ability, “No wonder (Frampton) has been running away from me 4 years. He can’t even box. Do you guys remember what happen 2 Nonito (Donaire)? Wait until I get his guy!”

Rigondeaux vs. Dickens is part of a huge show in Liverpool, England, on March 12 which is headlined by Terry Flanagan defending his WBO lightweight title against Derry Mathews. Former IBF junior bantamweight champion Zolani Tete will also face Jose Santos Gonzalez on the card.

The Channel of Champions, BoxNation, will televise live and exclusive on Sky 437/HD 490, Virgin 546, TalkTalk 415 and Freeview 255. Subscribe at www.boxnation.com or watch online at watch.boxnation.com and via iPhone, iPad or Android and Amazon devices.