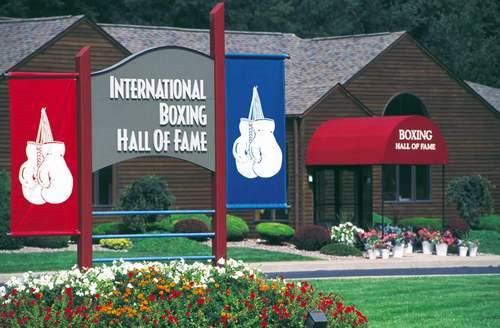 The belt won by Carmen Basilio in his 1957 victory over Ray Robinson — one of six belts stolen from the International Boxing Hall of Fame in November 2015.

The investigation into the six championship belts stolen from the International Boxing Hall of Fame in Canastota remains “stagnant” as authorities await the results of DNA testing.

The belts — four belonging to Carmen Basilio and two to Tony Zale — were lifted in November from the hall in a brazen robbery that has hit a nerve with fans enamored with the sport’s rich history. A probe into the belts’ whereabouts, which includes resources from the FBI’s Antiquities Bureau, has so far uncovered little, according to Canastota police chief Jim Zophy.

“At this point, it’s stagnant,” Zophy said of the investigation in a phone interview with RingTV.com on Tuesday. “We don’t have any leads. We’re waiting on DNA results to come back from the lab. Nothing new has come, no more information.”

Zophy doesn’t know when the DNA results, which he declined to elaborate on, will be processed. Because of the nature of the crime, it’s not a priority at the state police lab, which is used by other state agencies; crimes involving rape and assault would be processed before a crime involving stolen property, he said.

“Everybody in the state is pretty much using the state police lab for submissions unless they have their own labs,” he said. “And there’s very few, other than major cities that have their own labs. So I’m assuming there’s quite a bit of DNA on file that needs to be processed and those are the priorities.”

Even when the results come back, the authorities will have to find a match with someone who’s already been arrested and whose DNA is already in a database, Zophy said.

“Is it at some point in time we’re going to be notified that we have a match? I do not know,” Zophy said. “I do know it’s still evidence that we have that we don’t have answers to yet. So I’m confident that the evidence we have will point us in a direction. At the time it will definitely depend on whether or not the person whose DNA we have has been previously arrested and has DNA in the database. Otherwise it could be a length of time, but that remains. So if this person gets convicted down the road and their DNA is taken, we will be notified that the subject who was arrested — whose DNA was just recently taken — would be our suspect.”