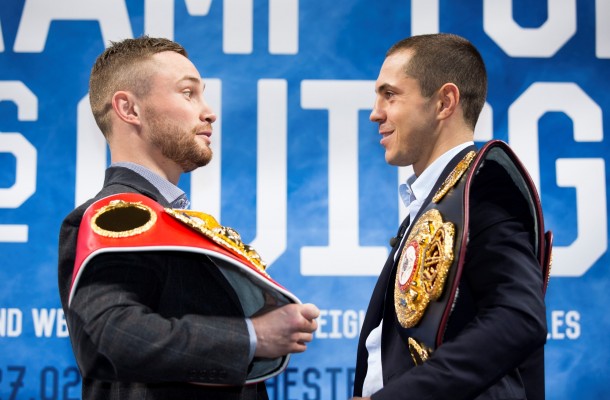 This Saturday, Carl Frampton and Scott Quigg meet in a highly anticipated IBF/WBA junior featherweight title unification match-up at the Manchester Arena (formerly M.E.N Arena), Manchester, England. The pair share two common opponents.
In 2010, Gavin Reid, a respected, now retired, journeyman, faced both men. He went nine rounds with Quigg in July and was stopped in two frames by Frampton a few months later.
However, more recently – and maybe more relevantly – Kiko Martinez has faced both men. Initially, Martinez lost his European crown to Frampton in an excellent, all-action fight, succumbing in the ninth round in Feb. 2013. Martinez rebounded fantastically well to win the IBF 122-pound title and they met in a rematch 19 months later. Although the Irishman again won the rematch and the strap, the fight went the distance.
Last July, Quigg met Martinez and, though the Spaniard arguably had the better of the opening round, Quigg hurt and stopped him in the second round for a career-best win. The heavy-handed former champion has rebounded to win three low-level fights and steps back up to world level on the same night as Frampton-Quigg when he faces Leo Santa Cruz for the WBA featherweight title. Surprisingly, Martinez is rather confident of one man prevailing when his former opponents clash.

“Frampton is my favorite,” Martinez told RingTV.com through Oscar Zardain of Maravilla Box. “In my opinion (Carl) is (a) better fighter than Scott, 100 percent much more skilled than him. Scott is a good fighter too but he had his lucky night when (he) fought against me.”

Having studied and shared a ring with both, he knows each beltholder’s strengths, as well as areas of weakness.

“Carl is a very talented fighter; he is fast and tough and has a good power in his hands too,” explained the 29-year-old. “Scott is a classical boxer with a very good technique. Maybe he is not the best in anything but he does everything in the right way. Frampton-Quigg is a superfight, no doubt.
ÒÇÇ
“The danger for Frampton is that he does not care about receiving punches. He ignores the defense and he is not worried about his opponent’s attack. I think that Quigg is less talented and his footwork is worse.”

When asked who will win and how, he says, “I think that Frampton will win the fight on the scorecards or maybe by a knockout in the final rounds.”