The RING Archive: Muhammad Ali and the pussy cat 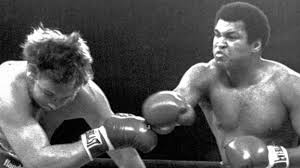 The fight report below originally appeared in the May 1976 issue of THE RING Magazine. It was authored by Mario Rivera Martino and is being represented to RingTV.com readers by Tom Gray.

Today marks the 40th anniversary of Muhammad Ali’s 14th defense of the undisputed heavyweight championship against Jean Pierre Coopman. The matchup was met with derision before and afterward.

Muhammad Ali spent five rounds attempting to train a pussy cat to be a lion and despite his best efforts and all the kindness that the heavyweight champion of the world possessed he was unable to make Jean Pierre Coopman, touted as “The Lion of Flanders,” look like anything more than he was – a pussy cat.

Unlike the last time the fans saw Ali in competition, when he thrilled the world in his “Thriller in Manila” defense against Joe Frazier, this Puerto Rico meeting with Coopman in the Roberto Clemente Coliseum before some 10,000 fans was just that, a meeting and not a fight.

The ending came at 2:46 of the fifth round when Ali, half-clowning and relaxed, went into a flurry of easy and loose punching that culminated in a right uppercut, a very lightly tossed left hook, and a half push.

Coopman stepped back, blinked, and lurched against the ring ropes and slid to the canvas where he was counted out by referee Ismael Quinones Falu, who appeared as surprised as Ali when Coopman went down.

Asked after the fight what punch he felt had done the damage, a usually loquacious Ali was at a loss for words, “I really don’t know,” was all he could muster.

The fight, if such it can be called, was totally spelled out for the forty million CBS televiewers and the live audience within a few minutes of the opening bell.

At 206 pounds, the Belgian champion came stalking out of his corner to meet Ali, who was looking over the audience and smiling to friends and acquaintances. Turning slowly toward the challenger, Ali stopped to cough, half yawn, and walked flat-footed toward Coopman. 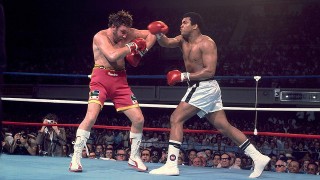 The man from Belgium was not fancy as he moved forward attempting to land a telling punch. He did not and never did land a telling blow. He was lacking in size, weight, strength and ability. But even as Ali stated, “He is one of the nicest men I’ve met in the ring, he has a nice trainer, and a lovely and friendly wife.” What Ali failed to state was that it would be better if he could also fight.

Coopman was one of the worst contenders to crawl between the ropes to take a crack at a heavyweight crown.

Other champs have had their bad ones but maybe it’s due to this being the most recent that it seems the worst.

The entire fight was a travesty for anyone paying to see it. In the second round Ali, who in the early part of round one had already solved Coopman’s lack of style, and knowing he had nothing to fear, would dance to his left, move to his right, stick with his left, cuff with the back of his left hand, while throwing glances at the audience and the clock. He threw just enough punches to keep Coopman discouraged.

It was in this round that one of the Ali cuffs opened a cut over Coopman’s left eye and the optic dripped up to the final ending. It was not a serious cut, but then nothing about the fight was serious. Ali, at 226 pounds, still suffering from a cough, did his best to move his opponent and himself through as many commercials as he could before the termination of the bout which came as a surprise to Ali, who had not even worked up a sweat. This is probably the first time in his career that Ali did not take a shower after a fight. His reason for not doing so was simple, “I didn’t feel like it.” It was obvious he was embarrassed by the lack of effort that the fight had involved on his part.

Coopman’s entire arsenal was composed of light jabs and hooks, and as for a punch, the guy just didn’t have one. The 24-year-old Coopman, with a 24-3 win and lose record, 15 knockouts, over “nothing opponents” didn’t have enough power to paste shut an envelope.

In attempting to add some color to the fight Ali clowned between the few blows he had to throw, and at one point in the rest period after round two, ogled the girl wiggling her way around the ring with the round card. For practical purposes this should have been a delight for Ali, who received slightly over one million for his night’s endeavors. Coopman received one hundred thousand for his, proving that he is one of the nicest men in boxing.

On the undercard, Jimmy Young of Philadelphia won a ten-round decision over Joe King Roman in an unimpressive bout for a man rated third among the heavyweight elite of the world. Roman did little but butt in his quest for victory and he lost a unanimous decision while getting a cut around his left eye. This was the same Roman who had been knocked out by George Foreman in one heat in Tokyo.

That Young was another powder puff puncher was made clear to the watching public. That he did not show enough to warrant a crack at Ali was all too clear. 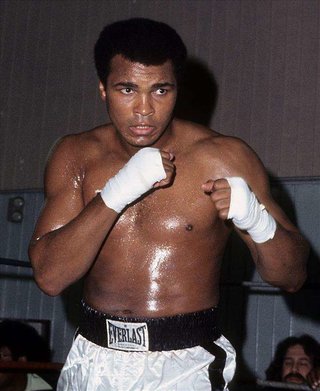 In fact, asked about Young’s showing after the fight, Ali himself stated that Young had no punch but would help him make money when they met in Costa Rica. The fans in Puerto Rico paid as much as $200 for a ringside seat for that fiasco and it looks as though the fans in Costa Rica will also pay that amount to be part of the first heavyweight title fight to be held in that country. According to King, ABC wants that fight in April. At least they did before the Young showing on the Ali card.

Sources close to King maintain that he still expects to push the Young-Ali fight through despite what the experts or anyone else might think.

What else is on the tappet for Ali fans? Loads of much better fare than a fight with Young. For example, according to King himself, Kuwait, Turkey and Sudan have all stated that they would put up fourteen million for an Ali-Norton fight this year. This could be a red herring since King says that he hopes this fight could be made in Shea Stadium in little old New York. His idea for the Shea extravaganza is for some large corporation to pick up the tab as the sponsor for a Bicentennial July 4th weekend.

King would like to make the Ali fight for New York or somewhere else in the U.S., but if that fails he will go overseas.

As for how long Ali will fight? The champion now talks about fighting until he is forty-five. Before his fight in Manila he was talking about one or two more fights. After his waltz with Coopman he thinks the million dollar free rides can go on forever.

We would hate to see a man such as Ali, who has done so much for boxing, continue until he is beaten by someone like Coopman, and in time that, too, could happen.