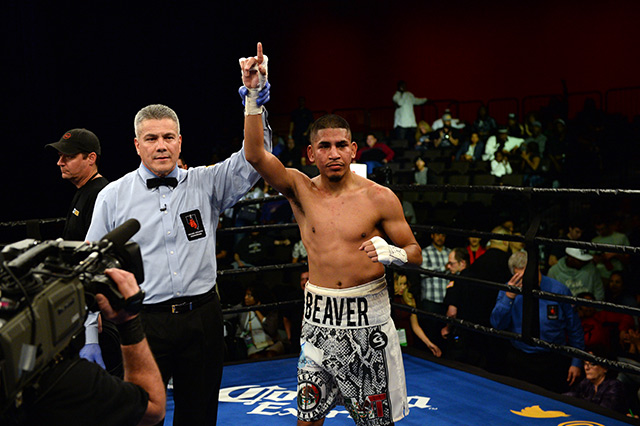 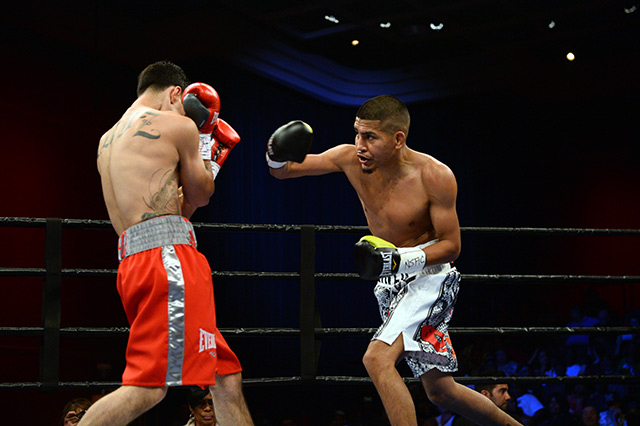 From the outset, the fighter affectionately nicknamed “Beaver” set out to prove that he was the busier fighter. In the early going, Santiago fought in close quarters exceptionally well as he ripped body punches and slipped in a nifty uppercut between his opponent’s gloves. Ruiz would have his moments on the inside as he effectively countered but Santiago’s workrate didn’t give him much room to operate.

In the third frame, Santiago decided to step back and shoot the jab to keep his game opponent at a safe distance and disrupt any potential momentum he sought to gain. It wasn’t that Ruiz was being dominated; he just didn’t have enough answers for what Santiago attacked him with. The difference was the Mayweather Promotions fighter’s ability to box just as effectively from the outside as he did on the inside. The balanced attack kept Ruiz guessing and a sneaky uppercut was thrown in just to shake things up.

With Floyd Mayweather Jr. ringside, it was evident that Santiago was there to impress and he certainly did that by staying active throughout the 10-round affair. If Ruiz had any hope of his opponent slowing down, it certainly wasn’t going to happen on this night. A strong Round 5 saw the Beaver empty the toolbox with body shots, the jab, a sweeping left hook and counterpunching. Santiago moved to slamming hooks into his opponent in Round 7 and ravaged his opponent with body shots in Round 8. Ruiz simply didn’t have any answers as Santiago earned scores of 100-90, 99-91 and 98-82 to pick up his 10th win in a row.

In an eight-round light heavyweight bout, Paul Parker (8-1, 4 KOs) escaped with a narrow split decision victory over Mayweather Promotions’ Lionell Thompson (16-4, 10 KOs). Parker got off to a fast start and used his distinct height and reach advantage to put Thompson on the end of his jab and long right hand. A flash knockdown in Round 3 proved to be the difference maker in the fight as Thompson slowly began to find his rhythm in the middle rounds by slipping under the jab and effectively landing counterpunches. However, it was too little too late for Thompson as two judges saw it 76-75 for Parker while the third saw it in favor of Thompson with a 76-75 scorecard.

In a battle of super middleweights, Lanell “KO” Bellows lived up to his nickname with a fifth-round stoppage of previously unbeaten Antowyan Aikens. Aikens held a significant height and reach advantage and but did little to use it for offense. Instead, he allowed Bellows to chase him round after round. Bellows began to effectively close the distance in Round 3 and landed some solid shots as it was clear that Aikens didn’t have much to offer in return. Bellows finally inched his way into punching range and launched a chopping right hand sent Aikens down in the fifth. He appeared to recover quickly but opted to stay on a knee for the 10-count at the 2:08 mark. Bellows improves to 15-1-1 (8 KOs) while Aikens falls to 10-1-1.