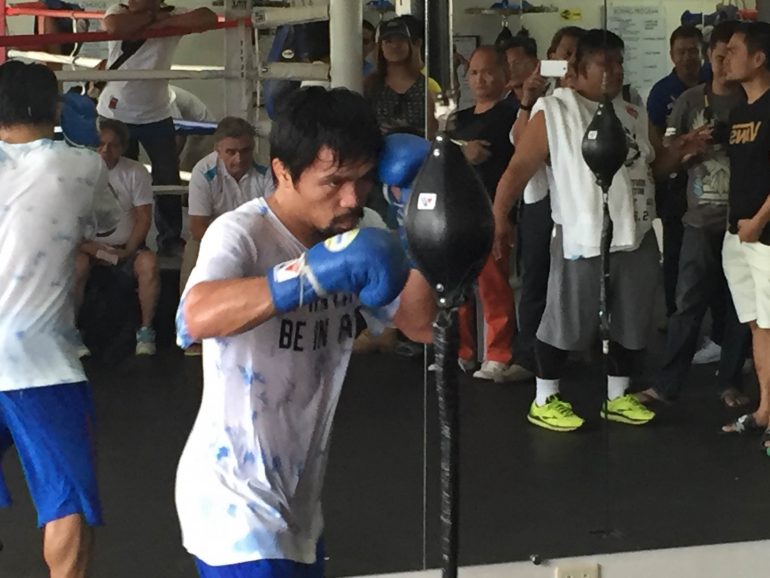 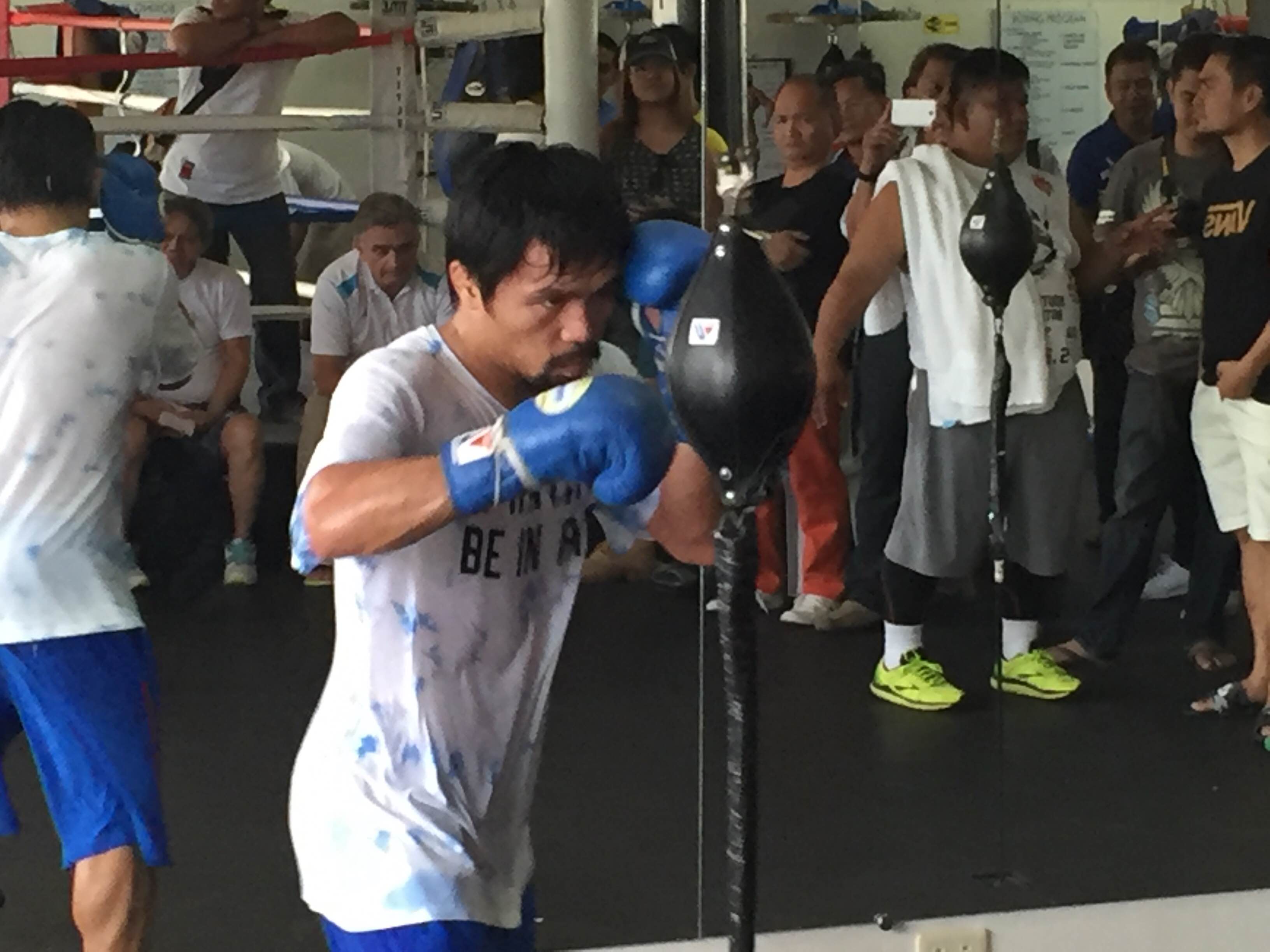 GENERAL SANTOS, Philippines – Manny Pacquiao and trainer Freddie Roach reunited at the Pacman Wild Card Gym Monday for the first day of what the eight-division champion says will be his final training camp.

Pacquiao (57-6-2, 38 knockouts) worked the punch mitts for seven rounds with Roach as they kicked off serious training for Pacquiao’s third fight against Timothy Bradley Jr. on April 9 at the MGM Grand in Las Vegas.

Pacquiao, who says he had not done any boxing training since his unanimous decision loss to Floyd Mayweather Jr in May 2015, declared, “I’m back” after the first round on the mitts as he continues to work off the rust.

“It’s nice to be back, Mike,” Pacquiao replied.

Roach, who says mitts alone are not enough to gauge what a fighter has left, liked what he saw on day one, nonetheless.

“We went six-to-seven first rounds that first day. He wasn’t even breathing heavy. I was breathing heavier because I hadn’t done mitts in a while,” said Roach, who had been sidelined with back problems for the last few months.

“I think the fact that he’s been out of the ring for almost nine months, it’s rejuvenated him. Sometimes being away from something that you love reinvigorates you,” added Koncz.

Pacquiao, 37, says his upcoming fight against Bradley – to whom he lost controversially in 2012 before avenging the defeat in 2014 by decision – says he will retire to focus on his political aspirations. Pacquiao, a two-term congressman in his native Philippines, is running for one of 12 seats up for grabs in the general elections on May 9.

Pacquiao responded to claims that the fight lacked purpose by saying he wanted to “win convincingly [so] that people will not have anything else to say.” Roach admits that Pacquiao has some things to work on, which he hopes will be ironed out in time to produce a performance fans with which fans will be happy.

Pacquiao has not stopped an opponent since 2009, when he finished Miguel Cotto in the 12th round of their welterweight bout.

“There’s a lot of things I want to work on and get back to, like being more aggressive, more combinations, be a little bit hungrier,” said Roach.

“I told Manny that people don’t want to just see him winning fights; they want to see the old Manny knocking people out. That’s what I’m looking forward to in this fight.”

Koncz says Pacquiao had his right shoulder examined during the US press tour last month as a prerequisite for being licensed by the Nevada commission and was given a clean bill of health to train without restrictions.

Pacquiao had his shoulder tested early in training as Roach repeatedly called for Pacquiao to throw double hooks on the mitts, which Pacquiao took as a challenge to add more hooks to the combinations.

“I am drawing inspiration from many things to focus on my training. First thing first is my retirement and the determination to win,” said Pacquiao in Tagalog.

Roach says there is no concrete date yet for when Pacquiao will move training to the Wild Card Gym in Los Angeles but says he’ll be bringing two sparring partners to the Philippines on Sunday to begin sparring on Monday.

One of those sparring partners is Lydell Rhodes, the American junior welterweight with a 23-1-1 (11 KOs) record, who gave quality work to Pacquiao before the second Bradley fight. Roach said he could not remember the other one’s name but that he had just turned pro out of his gym.

Roach says he doesn’t anticipate much of a difference in the 32-year-old Bradley (33-1-1, 13 KOs) despite bringing in trainer Teddy Atlas for his last fight, a technical knockout of Brandon Rios.

“When he gets hit, he’ll go back to what he always does,” said Roach.

Pacquiao seemed happy to be reunited with his mentor, as well as the sport that made him famous.

“I’m back because I’m excited to be back in training, focused on training. It’s been a while, almost one year. I miss boxing,” said Pacquiao.