Sadam Ali: ‘I want to win a world title’ 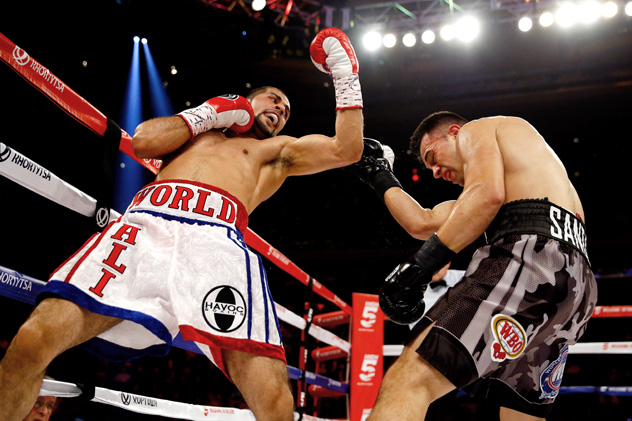 I thought they were punking me. 470, then vacant lot, then 462. I couldn’t find the place to save my life.
WTF?
I’m here in Bedford-Stuyvesant, Brooklyn – “Do or Die Bed-Stuy” they call it, especially when the streets claim a kid, when the shooters activate and get lethal.
The city is so calm compared to the bad old days but, still, there are flare-ups of violence which remind us that life can be cruel and unfair, grotesquely, mindlessly callous.
Inside a boxing gym, like the private one at which Sadam Ali trains, which I finally walked into when I called him to flag me in, there too is violence.
But it isn’t random or horrific. It is structured and is a means to an end. Learn the art and science of pugilism and you can conquer a foe, and your own character deficiencies. And you can become a star. That could happen March 5, when Ali gloves up in DC, against Jessie Vargas on HBO.
The WBO welterweight title is up for grabs, with its holder, Tim Bradley being otherwise occupied in a waltz with Manny Pacquiao April 9. Golden Boy Promotions’ Ali, who was in the gym after finishing a workout with trainer Andre Rozier, was rated No. 1 by the WBO for two years. Step-aside money was offered to him to elongate the wait time but he blew it off. “That’s not why I’m doing this,” he said. “I want to win a world title.”
Ali is 27 (22-0, 13-0 knockouts), has been brought to this place deliberately, smartly. He exploded onto radars when he detonated on Luis Carlos Abregu in Nov. 2014. “He turned it up; yes he did,” Rozier offered, nodding his head, pleased at the memory.
He defused the power puncher’s explosiveness, brought him into deeper waters and then drowned him. Ali won’t say how he plans to deal with Vargas, a California boxer promoted by Top Rank Promotions but we can assume Ali stays smart, looks to decipher, analyze, decode and then amp up aggression.
“It’s gonna be two fighters going for their dream,” Ali told me. “A WBO world title fight.”
Ali heard Vargas posted a video promising to KO him in DC. He told me about that, no expression on his face.
Response: WHATEVER.
Just like that lack of a number on the gym door to keep out riffraff, I got nothing when I asked about sparring for this fight. “I’ve been sparring with everybody,” he said. “But I’m ready for anything. He might come to me or stay outside and counter.”
Ready for anything, he is.
One element to this fight that is up in the air is PED testing. Ali wants it stringent, VADA-style. He was told that the fighters need to pony up. Vargas doesn’t want to, though, Ali told me, so he will shoulder the cost for testing for the both of them. “It just happens like that sometimes,” the mellow fighter told me.
I told him it is to his credit that he’s pushing for it and he agreed when I suggested the sport impose a 1% tax on mega-pay-per-views, with funds to go toward testing for all. Great idea, we all agreed…”I want both fighters to be comfortable,” he said.
It was time to head out. Someone needed to go see a dentist. I needed to get home and help the kids ready themselves for bed. And Sadam Ali would head home, shower, grab chow, get some shuteye and wake up and go back to the grind. He asked me to hold up and said he wanted to dedicate this fight to all those fighters felled in battle, who perished or were left compromised. “We put our lives on the line; it’s very dangerous. My friend, Hamzah Aljahmi, died after his first pro fight. I send condolences to his family but I’m ready to take it to the top, to shine, to bring a new star to this boxing world.”
And we walked outside, opened that unmarked door, breathed the winter air in “Do or Die” Bed-Stuy. March 5, if Ali wins, especially in conclusive fashion, that gym door is going to get more knocks. This sport isn’t for the fainthearted but it still attracts people who prefer that structured combat over the freeform street version. Every so often, a kid tries it, stays with it, perseveres, through the pain and political BS, and gets that gleaming belt and the right to call himself a world champion. It happens that way just sometimes.
Michael Woods knows a little something about a “Do or Die” mentality. He’ll tell you all about it after he wakes up from his nap. Hey, he takes his shuteye seriously.