Sergio Mora says he has unfinished business with Daniel Jacobs 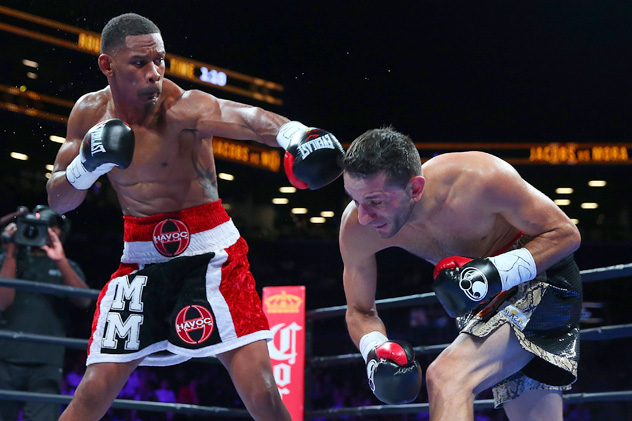 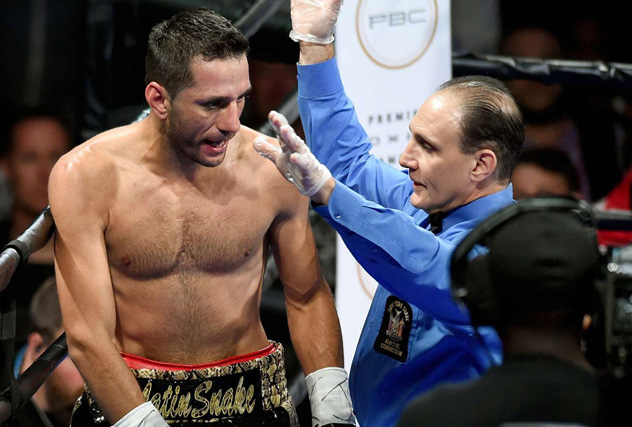 Referee Gary Rosato waves an end to the fight between Sergio Mora (L) and Daniel Jacobs after Mora fractured his ankle in the second round. Photo by Naoki Fukuda.

The last time fans saw Sergio Mora, the former junior middleweight titleholder had exchanged knockdowns with Daniel Jacobs in a short but exciting middleweight fight at Barclays Center, Brooklyn. The thrilling battle was curtailed late in the second round due to an injury to Mora’s right ankle.
“The way I injured my leg, nobody seems to understand,” Mora told RingTV.com last week from the Gamboa Boxing Gym in Whittier, California. “He stepped over me when I went down; my foot got caught in a compromising position. Now I could have gotten up from that. He stepped over me and I tried to get up because his whole weight was on me and that’s why my leg popped.
“I thought it was a no-contest, so I sat down calmly, I see him cheering on the ropes and was like, ‘Wait a minute, I didn’t get hit by a punch,’ so then when the referee (Gary Rosato) said, ‘Do you want to continue?’ I said, ‘My leg.’ And then he stopped it immediately. The adrenaline is still flowing but I know I can’t put pressure on it; then they called it off and said he won by TKO. If I would have known that, then I’d have caused more of a scene. I didn’t know if it [my leg] was broken or what was wrong with it.”

Mora, whose record dipped to 28-4-2 (9 knockouts), went to the nearby Lutheran hospital for an X-ray. The results showed he had torn two ligaments, one completely severed, the other was minor.

While at the hospital, Mora received a surprise phone call from Al Haymon, who advises him.

“He was the only one who called me at the hospital,” Mora said. “It was from a number I didn’t recognize. I answered it and (he said), ‘Sergio, how you doing? It’s Al Haymon.’ I said, ‘How are you doing, Mr. Haymon?’ He said, ‘Listen, how are you, first of all?’ I said, ‘I’m at the hospital now, about to get my X-rays.’ he said, ‘Regardless of what happens, let me say fate intervened. You got injured; as soon as you’re ready to come back, we’re gonna put you in a big fight. We’re not gonna go backwards; you put on a great performance for as long as it lasted and keep your head up and call me when you’re ready to get back in the ring and we’ll put you straight into a big fight.’ I go, ‘Mr. Haymon that’s all I needed to hear; you just lifted my spirits.'”

He was unable to fly back home to Los Angeles because of the injury. Luckily, he had family in upstate New York whom he visited for a week. As well as recuperating, he decided to try to do something about what he perceived was an injustice.

“I was also looking for a lawyer to appeal this decision,” said the 35-year-old veteran. “Politics got in the way. I really don’t want to get into it but let’s just say when you try to hire the best attorney, they’re usually fighting other people too and I didn’t want to step on anyone’s toes.”

With that in mind, Mora took things into his own hands and wrote a letter to the local commission but admits, “When you don’t have the big guns behind you, they really don’t pay attention to you like they should. They declined my decision for an appeal; they don’t do court appearances in New York. They just decide right there with their facts; I didn’t know that either. I thought I’d get my day in court but, in New York, the arbitrator decides right there.”

When it was time for Mora to make the return journey cross-country, he made his way on crutches to the airport and checked himself in.

“I was looking for my business seat or my coach seat and the flight attendant said, ‘No you’re way in the front.’ Mr. Haymon got me a front row, first-class flight back; these are the little things people don’t understand. This man, he doesn’t have to do that. I didn’t fly there first-class but I flew back first-class,” Mora said.

Fast forward six months and the easily likable Mora estimates he’s now 80 percent fit. He’s keen to get back inside the ring.

“The Latin Snake” would like to fight one return bout and then chase a rematch with Jacobs.

“They called me about February; it was too early for that. Lets look at March, April,” he said. “They mentioned one name – I don’t want to throw it out there yet but it’s a well-known name to get back my bearings and then try to get that Jacobs rematch in July.”

The Los Angeles-born fighter, has unfinished business with Jacobs, who he feels disrespected him.

“I wouldn’t be so vocal about it but the way that he talked about me after he beat me,” explained Mora, “if he had said ‘As soon as he heals up, we can consider a rematch but, right now, I’m moving forward; I want Quillin,’ that would have been an appropriate answer. But when they asked him in the ring, he sees me injured and he says ‘I don’t want to talk about it; it’s behind me. He’s lucky he got an opportunity.’ I’m the best fighter on your resume and yet he knocks out Quillin convincingly and he goes ‘Yeah, I’ll give him a rematch.’ How does that work? It’s money, one, and, two, you’re not hitting me as easily as you’re hitting Quillin. Power punchers hate missing; he hit me with that shot but, other than that, I didn’t feel other punches.”

For now Mora, who also works as a commentator, is focused on getting back to full fitness and returning to the middleweight fray in the coming months.