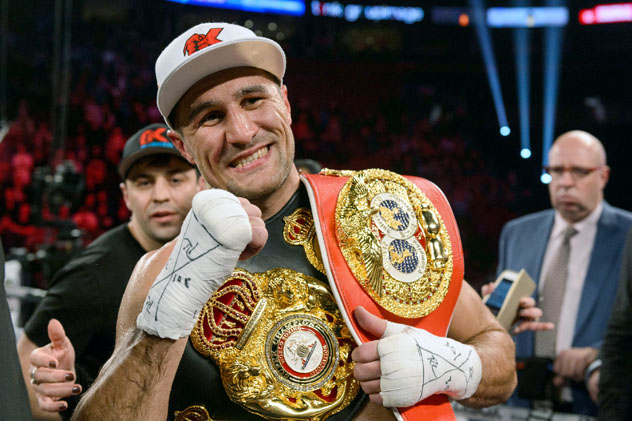 Kovalev vs. Pascal: I never understood this matchup, other than the obvious fact that Sergey Kovalev needed a body in front of him for his next fight and the pickings are slim at 175 pounds. Jean Pascal gave a spirited effort the first time he met Kovalev, in March of last year, but he ultimately took a thorough beating and lost by an eighth-round knockout. Why do it again? The rematch Saturday in Montreal was so predictable that it wasn’t interesting, aside from the pre-fight histrionics. Pascal showed some life in the first few rounds but had the fight pounded out of him by the fourth round, during which Kovalev’s increasingly damaging punches began to go unanswered. Three rounds later, after the seventh, his trainer Freddie Roach saved him from further punishment by stopping the fight. The CompuBox numbers were sadly one-sided. The one that stands out most to me is power shots landed: 78 for Kovalev, 16 for Pascal. Enough said. Credit to Kovalev, who did his job in typically dominating fashion against a solid opponent. I don’t believe anyone at light heavyweight – with one exception (see below) – is capable of giving Kovalev a serious challenge. One could argue he’s the best fighter in the world pound for pound. Credit to Pascal, too. At least he had the guts to step into the ring a second time knowing full well what he was up against.

Kovalev vs. Ward: Kovalev and Andre Ward appear to be headed toward a showdown, possibly in November. Does it get more intriguing than that? Kovalev is as hot as any fighter on the planet; Ward is as gifted as anyone. They’re both undefeated. I’m picking Ward to win at this moment. The former RING champ has fought only once in two-plus years, which means he must shed rust, but I have no reason to believe he has declined in any way. I expect the Ward who steps into the ring with Kovalev to be at his best. And that could be too much for the Russian, who has never faced an opponent in his prime with the skillset and resourcefulness of Ward. I expect the American to win a clear unanimous decision. I don’t write that with great confidence, though. Kovalev proved again on Saturday how he can coldly, methodically dismantle an opponent. He also demonstrated against Bernard Hopkins in 2014 that he’s far more than a slugger, outboxing the master to win a one-sided unanimous decision. I don’t know whether he has the speed and athleticism to keep pace with Ward but his power could be the equalizer – or perhaps Ward’s undoing. We all know that one punch can change everything. I expect predictions to vary widely, a sign that this is essentially a 50-50 matchup. Adonis Stevenson? I don’t think he wants to face Kovalev and contractual conflicts almost certainly will prevent it from happening anyway. Plus, I don’t think that’s a difficult fight for Kovalev. Stevenson would end up looking a lot like Pascal did on Saturday night. The fight we want to see: Kovalev vs. Ward.

Pascal accused Kovalev of being a racist before their fight, which provided most of the pre-fight drama. I don’t know what’s in Kovalev’s heart; only he does. I do know that people must take responsibility for what they say and do. One example of what Kovalev did: He compared Stevenson to a chimpanzee in a tweet. If that’s not racist, I don’t know what is. And I find it hard to believe anyone would see it any differently. No one can tell Kovalev what to think, although he should look in the mirror and ask himself some hard questions if he cares about the type of person he is. If I were one of his advisers, I would just tell him one thing: Think before you speak, or act, or face the consequences. ÔÇª I’m not sure what to think about Dmitry Mikhaylenko, a Russian welterweight who easily outpointed late replacement Karim Mayfield on the Kovalev-Pascal card. Mikhaylenko (21-0, 9 KOs) appears to be a well-schooled pressure fighter who will force any opponent to work hard but he has minimal punching power. I doubt he can hang with the best 147-pounders but the jury is still out. Mayfield (19-3-1, 11 KOs) was a legitimate contender early in 2014 but the 35-year-old is 1-3 since. He has suddenly become an “opponent.” ÔÇª George Groves (22-3, 17 KOs) bounced back from his loss to Badou Jack by stopping Andrea di Luisa (18-4, 14 KOs) under new trainer Shane McGuigan on Saturday in London, which was predictable. Nice job. Now he must prove he can win the big fight after falling short against Carl Froch (twice) and Jack. That will be more difficult.