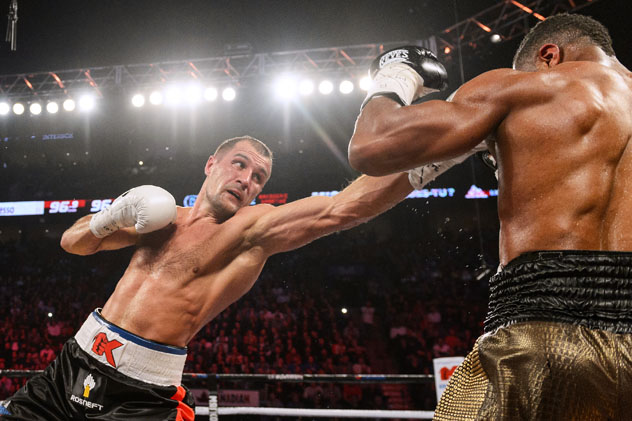 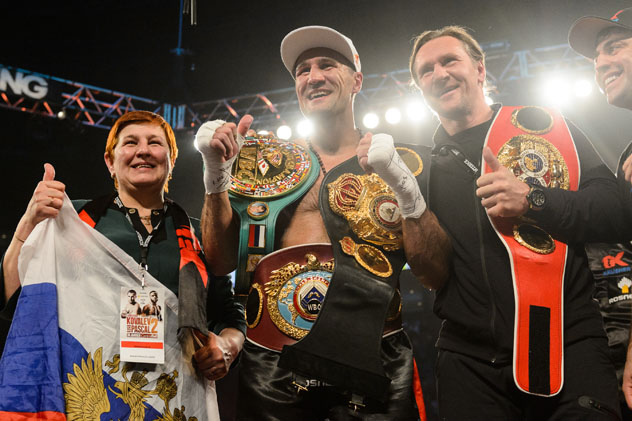 Sergey Kovalev of Russia (center) with his mother and with former NHL player Alexei Kovalev following his second win over Jean Pascal at the Bell Centre in Montreal, Canada. Photo by Minas Panagiotakis/Getty Images

Kovalev (29-0-1, 26 KOs) threw jabs, went to the body and unleashed constant combinations, while Pascal resorted to looking for one big punch (usually the left hook).

Pascal (30-4-1, 17 KOs) was punished throughout the fight, especially Round 5 when a sharp right hand landed flush for Koavalev. Pascal nearly went down but somehow kept himself up on drunken legs. Kovalev stalked and continued landing at will, but gave Pascal a reprieve in Round 6 when he didn’t appear to look for a knockout blow.

Round 7 saw Kovalev step on the gas more and hurt Pascal with body shots. Pascal started to live on the ropes hoping they would be there to keep him up if his legs gave way. Kovalev was calculating and punched cautiously not allowing Pascal to get off a counter shot. Following the round, Roach immediately signaled that they had had enough calling an end to the fight. An emotional Pascal needed to be consoled by Roach in the corner while Kovalev attempted to make up with the just under 10,000 in attendance at the Bell Centre.

Kovalev is showing to be comfortable in both the villain role and as the visitor to the hometown fighter. Immediately after the bout as former super middleweight champ Andre Ward left the building, Kovalev told HBO’s Max Kellerman that although he is ready for Ward he really wants to fight Adonis Stevenson. Kovalev referred to the WBC and lineal champion as “Adonis Chickenson” and proceeded to make chicken sounds. Stevenson immediately rushed the ring and attempted to go after Kovalev much in the way heavyweight champion Tyson Fury went after Deontay Wilder two weeks ago in New York.

Both Stevenson and Kovalev were quickly separated by security. Boxing fans know for sure that Kovalev and Ward will meet at some point before 2016 ends. They don’t know if Kovalev’s camp and Stevenon’s will find a way to make their unification fight happen while both men have their respective share of the light heavyweight belts.

Mayfield stepped in as a last minute replacement when Mikhaylenko’s original opponent Ray Robinson had to back out due to an injury sustained from a car accident during training camp two weeks ago. The veteran tried to blitz Mikhaylenko at the start of Round 1 landing a few shots but “The Mechanic” seized control and began to pick Mayfield apart.

The 29-year-old Russian made the move from prospect to contender with a dominating performance over his toughest opponent to date. Without huge punching power Mikhaylenko was able to land cleanly on Mayfield all night. Mikhaylenko landed the best punch of the night to close out the Round 6 when a roundhouse right cross staggered Mayfield into the ropes.

Whether a full eight-week camp (for Mayfield) would have made a difference in the outcome is uncertain but Mikhaylenko dominated easily, winning all but one round on all three judges’ scorecards. Mayfield was the other opponent Floyd Mayweather threw out there as consideration before he announced that he would fight Andre Berto in his last bout before retirement.

Mikhaylenko graduated to fighting on HBO from the previous time he fought on the Kovalev-Pascal I undercard last March when he stopped Felipe De la Paz Teniente in five rounds.

In a tremendous early fight-of-the-year candidate that only those in the arena and watching on Canada PPV saw, two remarkable athletes from Quebec furiously traded blows non-stop for 10 grueling rounds. In the end Francis Lafreniere (11-5-2, 6 KOs) upset Renan St. Juste (26-5-1, 18 KOs) by unanimous decision to win a minor IBF middleweight title but more importantly the adulation of an entire city. The official scores were 99-90 and 97-92 (twice).

Lafreniere survived a nasty cut over his right eye to outslug the St. Juste and get the better of the crafty southpaw. St. Juste seemed to have control early on but in the third round Lafreniere followed up a body shot with two hooks upstairs and the momentum quickly shifted. The rest of the round was chock-full of see saw action which would carry over into round after round.

St. Juste was on a three-fight win streak after suffering back-to-back losses to Anthony Dirrell and Allan Green. In this bout he ran out of gas by the Round 5 and fought on fumes the rest of way through trying to expose the cut over Lafreniere right eye and make the fight an even bigger bloody mess.

After the ringside doctor checked Lafreniere’s eye and allowed the bout to continue Lafreniere sensed the urgency and turned it up a notch throwing bombs at St. Juste landing at will and getting the crowd to its’ feet over and over again.

The fireworks spilled over into Round 8 where the punches were coming at all angles and even landing below the belt. After one warning the referee deducted a point from Lafreniere but it would not factor in the scoring.

By Round 9 both men were exhausted were unable to keep their hands up when Lafreniere landed his best punch of the night. St. Juste was plain out on his feet and tried desperately to hang on but couldn’t and was saved by the bell to end the round. The entire Bell Centre crowd gave both men a standing ovation as jubilation set in on Lafreniere as he was awarded the hard fought victory.

Junior featherweight prospect Vislan Dalkhaev (5-0, 1 KO) dominated Alan Salazar (5-2, 2 KOs) to win an easy four-round unanimous decision. All three judges at ringside had it identical 40-36. Dalkhaev, who now resides in Montreal by way of Boragangechu, Russia, had his way with Salazar as he showed off lightning-quick combinations. The Marc Ramsay-trained fighter also had undefeated light heavyweight contender Artur Beterbiev in his corner helping to translate instructions.

Junior welterweight prospect Joel Diaz Jr. improved his unbeaten record to 21-0 with 17 KOs as he easily dismantled the overmatched Abraham Gomez (13-21-3, 5 KOs) by second round TKO. The official time of the stoppage was 1:45.

Diaz, who is now co-promoted by Jean Pascal, obliterated Gomez with a series of right-handed power shots for which the Mexican fighter had no answer. Gomez went down from a right hand to the side of the head. Although he beat the count

Local crowd favorite David Theroux (9-1, 6 KOs) defeated Juan Armando Garcia (12-3-2, 5 KOs) by third-round TKO. The official time of the stoppage was 2:46. Theroux excited his fan base with a crisp left hook to the body that sent Garcia to the canvas for the first knockdown. Theroux then continued to land unanswered power shots until referee Jean Gauthier jumped in to call a halt to the action.

Heavyweight prospect Cassius Chaney (6-0, 4 KOs) battered Zoltan Csala (9-5, 7 KOs) to win by third-round TKO. The official time of the stoppage was 2:52. The six-foot-six inch Chaney, who played division one basketball in college, towered over Csala as he dug in body shots and hooks up top until the referee Roussel Benoit had seen enough and jumped in to save Csala.

The 20-year-old Butler, who was the Canadian National Champion as an amateur, got off to a quick start by blitzing Hoffman with a searing combination punctuated with a right hook to the temple to score the knockdown in the first round. Hoffman got himself together and extended the bout all the way to the eighth and final round until Butler unleashed a highlight reel knockdown coming from a series of left and right hooks to send Hoffman crashing to the canvas face first.

In the opening bout of the evening, Lithuanian Virgilijus Stapulionis (17-3-1, 13 KOs) dropped Laszlo Fazekas (27-24-1, 17 KOs) from Hungary 4 times en route to a second round TKO victory. The official time of the stoppage was 3:00 of Round 2. Living up to his “Terminator” nickname, Stapulionis shook off a bloody right eye as a result of a head butt from Fazekas to land his right hook that resulted in the fourth and final knockdown as the second round came to an end.